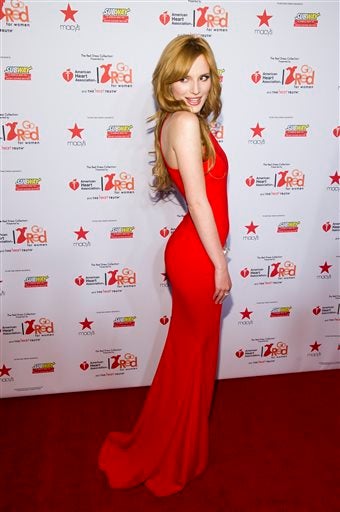 It was the sixth day of fashion week and the city continued to shiver under a blanket of cold weather.

Shows were being held at the Mercedes-Benz Fashion Week tents at Lincoln Center and at various locations throughout the city.

With a little tear and a victory walk down the runway, Donna Karan marked her company’s 30th anniversary Monday night with a journey through New York.

Just across from the New York Stock Exchange, illuminated in blue and red, Karan welcomed old friends and industry powerhouses to a fortress once owned by J.P. Morgan, its exposed brick and beams as backdrop to a collection that looked back on some of her iconic elements but kept her New York woman moving forward.

“She’s so signature to New York,” said one of her guests, fellow designer and actress Katie Holmes, who was dressed in Karan. “She’s given us all a new dream to have. I think that should be applauded.”

Karan paired her clothes of black viscose and felt, ivory shearling and ruby silk chiffon with a dreamy film by friend and fashion photographer Steven Sebring featuring a woman in swirls of motion made with his “geodome,” an enclosure a subject stands inside for a multidimensional take on form and movement.

It was “Revolution,” a multimedia presentation Sebring put on last year at a New York City armory that inspired Karan to seek him out as part of her anniversary celebration.

For Holmes, it’s Karan’s knack for understanding women that makes her such a great designer. “You just feel the most feminine. You feel great. She really designs for women.”

The women on Karan’s anniversary runway wore bodysuits in illusion tulle, other sexy sheers showing slices of skin and backless evening looks with sequins and beads. But their strength was present in military-inspired coats and jackets, some with quirky sleeves of shaggy fur.

Karan’s city was omnipresent, as her notes summed up: “New York is what I stand for — the past, the present, the future.”