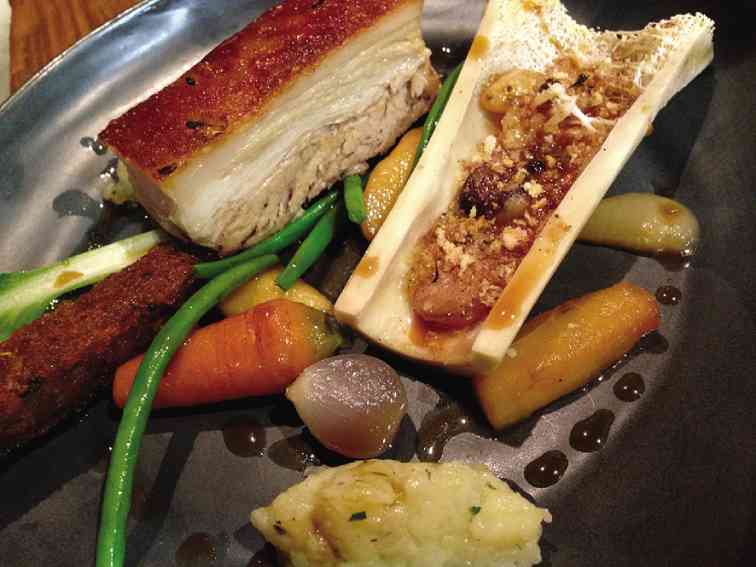 Black Pig–an amenable resto worth the drive to Alabang

After the splendid debut of Black Sheep, another dark animal has wandered into town. Well, not quite into town, but close enough at the outskirts of town; nearer than Antonio’s and much nearer than Quezon City, which has become its own dining ecosystem these days.

Black Pig opened late last year in a very empty mall in Alabang. There are a few other restaurants open for business in the fresh-concrete block that is the Commercenter across Filinvest, but not much else. I’m very curious what Black Pig will be like in the middle of a busy mall, but as of the moment it has an exclusive, falling-off-the-map feel to it. But it does get full, so reservations are in order before you put on your motoring goggles and go for a weekend drive.

This one, it seems, is supposed to be a craft beer place, so it’s somewhat surprising that only four beers are on tap. Otherwise, the drinks menu seems to be the usual mix of a few sophistications in addition to the usual suspects. Do restaurants make so much money from drinks that the bar menus tend to far exceed the length of the food menu? Or is it that bartenders—sorry, mixologists—are that much more creative than chefs?

But if the beers are truly crafty, then I’d rather have four good ones on tap than a slew of assorted bottles getting dust, just as I prefer a short, concise menu than a ramble through a freezer’s worth of microwavables.

I can’t comment on the beers, though friends have told me that they’re good; but I can on the food, which I thought was unexpectedly good. I suppose it helped that my wife and I both went in with our skeptical eyebrows attached, because we haven’t had very good experiences at tapas bars lately.

Tapas bars for me raise a flag that says sloshes welcome but foodies beware, because they will serve you very little food and make you pay a great deal for it, perhaps in the hope that you’re extremely drunk by the time the bill comes around.

But the Black Pig isn’t, fortunately, a tapas bar, but a bar and charcuterie.

There’s a limit to the amount of cured meats one can eat in one evening, so after the platter of black pig in the form of Iberico ham, we ordered a full meal. The bread was “home-baked,” by which I suppose means made in the restaurant rather than in a literal home.

I’m always ambivalent about restaurants rolling their own because it takes a lot of time and is usually middling, which it was in this case. The ham itself, though, was excellent, little wafers like wood shavings from a carpenter’s plane, light as air, impossibly thin but packed with dense, rich, dark flavor. The restaurant’s main contribution to this is sourcing and then cutting, so I’ll move on to the actual food.

We had cold pea mint soup, which had a dollop of ricotta cheese hidden beneath the sea of green, which I thought might make the soup heavy in the stomach but added an unexpected and welcome fresh whiff of acidity.

A squid ink risotto was gray-hued and tonally complex; again, a dish that often goes terribly wrong, but this one flavored with a deft touch and which trod just the right balance between being insubstantial and leaden. And your teeth won’t look like you’re auditioning for the chorus of “Les Misérables” afterwards, either.

The main course of pork belly arrived as an abstract expressionist platter, as is the trend for plating these days, all squiggles and splotches and sauces whipped across from a great height.

A slight misstep here with the pork, which was a tad ordinary: a perfectly good piece of lechon kawali, really, but everything else on the plate was dazzling and flavorful and unexpectedly good, so the mere competence of the main course came as something of an anticlimax.

And the bone marrow was highly decorative, but bereft of much actual marrow inside. I had slow-cooked sea bass which was faultlessly executed but perhaps a bit too fussy and overladen on the plate. Dessert was back to high standards with a floridly decorated rum baba doused in enough rum to make this teetotaler blush. And homemade marshmallows, hurrah!

All in all, worth the drive (which was surprisingly painless on a Saturday evening), and I envy the good people of Alabang for having such an amenable local restaurant, among many others that I have yet to try.

Note: I received a couple of responses to my article on bread (Jan. 30) which stated that Kamuning Baker no longer uses a wood-fired oven; both Micky Fenix and the new owner wrote  to confirm that it is still a pugon hearth in the old style, which I’m very glad to hear. I apologize for the error.