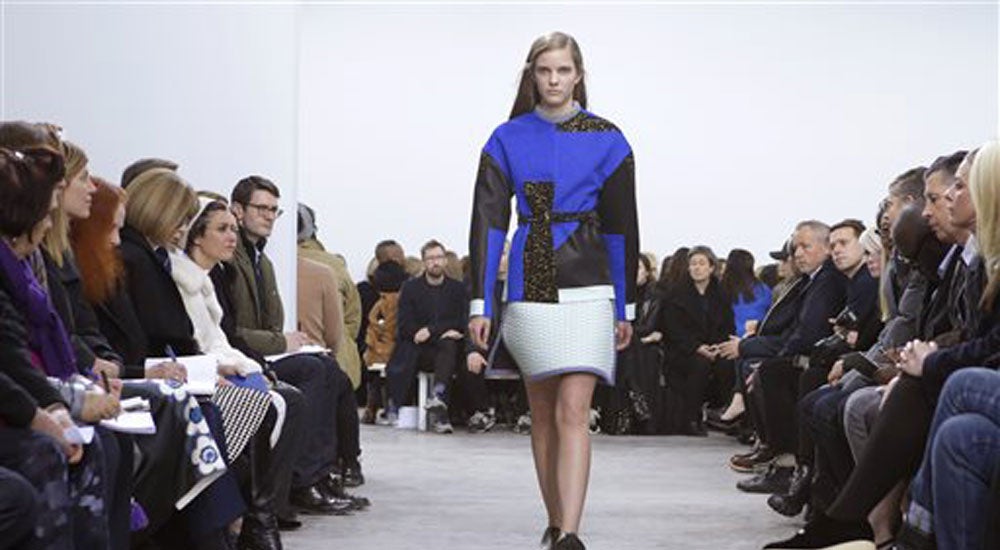 Jason Wu, who showed his own collection last week, came back with a sparkling line in his second job as artistic director for womenswear at the German fashion house.

As soon as veteran British model Stella Tennant ended the show and the Taiwanese-born designer came out to take a bow, Witherspoon and German actress Diane Kruger jumped up to cheer.

Backstage, the champagne flowed and Wu was mobbed by a crowd of press and celebrities lining up to be photographed with him, Paltrow and Scottish heartthrob actor Gerard Butler.

Wu offered up a feminine collection of clean lines in a color palette ranging from light gray and pale pink to basic black with sequins, printed patchwork, pleats and sparkle.

Wu said that he wanted to give the Boss women’s line, which has been around for 10 years, a true sense of identity that stayed authentic to the company’s DNA rooted in tailoring.

“Precision is very important. I wanted to channel all those qualities into a womenswear collection that was, at the end of the day, very feminine,” he told AFP.

He contrasted the show with his own by saying the Wu woman is a “bit more romantic and here, we’re something much cleaner, much sharper and a different kind of strength.”

Billionaire New Yorker Kors described his collection for next winter as one of “urban polish with laid back northern California ease” and “urbane romance”.

Actress Blake Lively and Indian star Freida Pinto sat next to Douglas as models powered down the runway in diaphanous chiffon skirts and fringed sweaters.

Kors, who entered the industry stratosphere after listing his company on Wall Street in 2011, is one of the biggest draws of fashion week in the Big Apple, which ends Thursday.

“Soft, fluid skirts, dresses and blouses juxtaposed with borrowed from the boys tailoring,” he said in his notes.

He offered artisanal embellishment for the day and sleek simplicity for the night, mixing plaids, tweeds and python.

The clothes were worn with clogs or chunky city sandals — or black platforms with a ballet-shoe ribbon lace-up strap.

The show was staged in a TriBeCa loft that offered a stunning view of the Manhattan skyline through floor-to-ceiling windows.

There were peasant blouses with scooped neck lines, floaty printed dresses, sequined skirts and oversized sweaters. Looks were cinched at the waist with circular buckle belts.

At the end, Kors ran out in black, doing a lap of honor round the U-shaped catwalk and waving to the applauding crowd.

Besides his luxury “Michael Kors” label, Kors also offers the more accessible “MICHAEL” and “KORS” with a big emphasis on accessories.

He has an ardent following among America’s trend setters, from celebrity Kim Kardashian to First Lady Michelle Obama, and has designed clothes for film and television.

Later on, designer Anna Sui treated another packed house, including director Sofia Coppola, to an exotic explosion of texture and color reminiscent of the 20s, 50s and 70s.