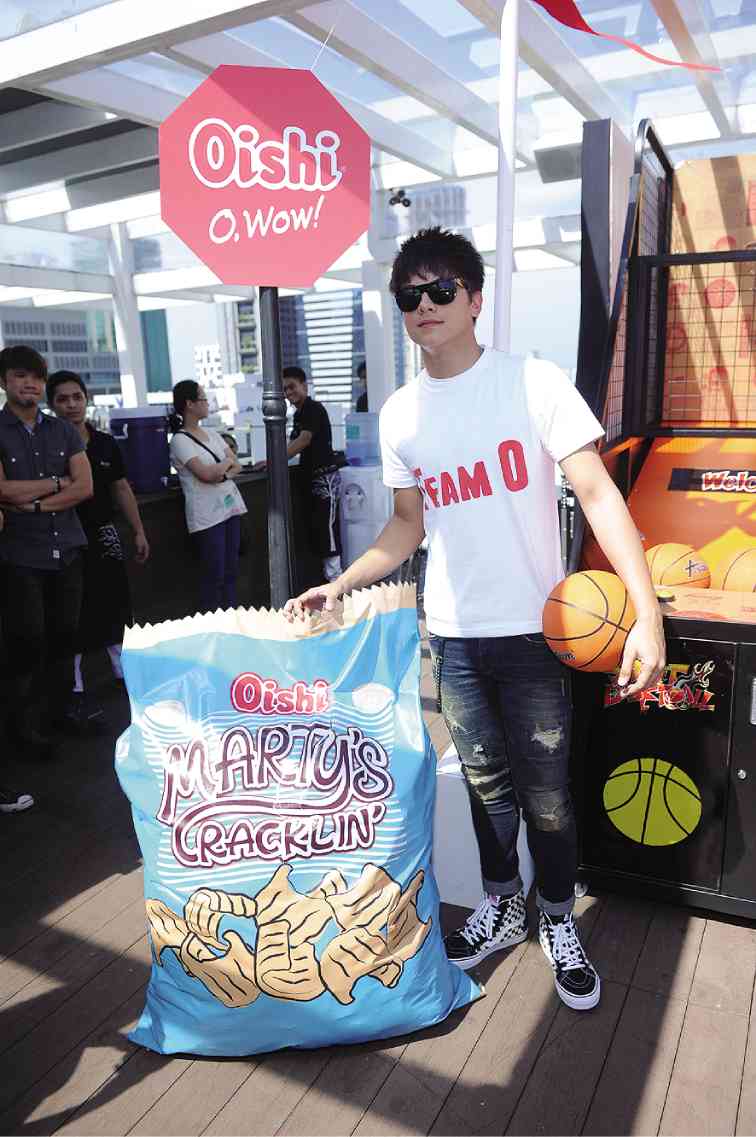 Proof that charm knows no class or chronological boundaries was Daniel Padilla’s debut as brand ambassador at the recent “Oishi O Wow!” party that celebrated the food line’s 40th anniversary.

The beeline for photos with the teen heartthrob was not limited to young girls as one would expect. His fan base also includes males, young and old, and affluent ones who did not bother to hide their pleasure at basking in his presence.

One mother with a preschooler in tow had to convince Padilla several times to take off his dark glasses during her photo-op. The young actor smiled but didn’t accede to the request. His road manager said Padilla was still “ngarag” (harassed) from his regular taping that lasted till morning.

The actor said he would have no second thoughts about giving Marty’s Cracklin’ to a girl he would court, just as he would hand over a bag of these to his mom, the former actress Karla Estrada.

Padilla joins a roster of other Oishi endorsers including host-comedian Ramon Bautista and young talents Elmo Magalona and Slater Young.

At the Oishi O Wow! celebration, the three celebrities collectively known as “The Original Team O” gamely manned stations of interactive games at the W Building roof deck with young fans of the food line who were grouped into teams named after the colors green, purple, yellow, blue and pink.

The teams were tasked to complete all stations manned by the Oishi talents at the shortest time possible.

Daniel, a big NBA fan, had his own station called Shoot Out where everyone was invited to try their hand at basketball.

The yellow team clocked the fastest time and earned an exclusive photo session with Daniel.

Event host RJ Ledesma announced that Oishi is currently scouting for O Wow surprise ideas that, if chosen, would be part of the food line’s series of advertisements.

To date, Ramon had already executed his O Wow stunt of doing a solo Oblation Run in sexy shorts.

Slater photobombed groups of unsuspecting girls having their pictures taken in an Oishi booth, while Elmo was “inserted” in that jaw-dropping “Kaleidoscope World” music video that his late father Francis M shot some 20 years back.

Ramon, Slater and Elmo also had a group effort where they posed as indifferent jeepney passengers, only to reveal themselves to stunned colegiala who screamed in surprise.

Oishi newbie Padilla had his own O Wow moment in Culiat High School recently where he mixed with 50 “clones” cloaked in identical dark shades and red hoodies.

Students who flocked to the gym were asked to guess who the real Padilla is.