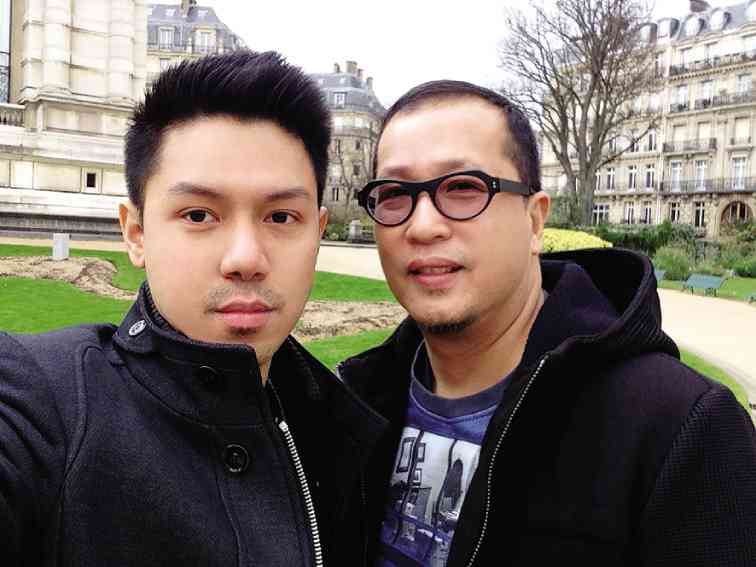 ‘We celebrate the fact that we’re healthy, happy and alive’

Their love story has overcome all sorts of obstacles and conventions. Filipino-Canadian Noel Crisostomo was already a seasoned and well-traveled designer in his 40s when he met young Roland Alzate in Manila four years ago.

Alzate, then fresh from a short stint as an English teacher in Seoul, wasn’t only young (in his early 20s), he’s also from a fairly conservative family.

Although his parents were aware of his gender preference, it wasn’t something they discussed. He wasn’t sure how his father would react to their same-gender relationship.

They met when Alzate went to Crisostomo’s shop in Makati to pick up a dress for his mother. Having left the Philippines for Calgary when he was only 20, Crisostomo was also quite new to the Manila scene. Before relocating to Manila, he worked in Toronto and Shanghai for such ready-to-wear brands as Club Monaco and Ports 1961.

“There was already a spark between us when I first saw him,” said Crisostomo. “For some reason, I found myself inviting him upstairs to our work area to show him more of my pieces.”

Before the day was over, the pair found themselves spending a “no-frills” dinner in a neighborhood restaurant. Crisostomo, who must have had a million things going through his head, forgot to bring his wallet.

“Rense (Alzate’s second name) ended up paying for our dinner,” he said with a hearty laugh. “Nakakahiya naman sa bagets. (It was so embarrassing to him.)”

The attraction, it turned out, was mutual.

“Before we met, I never believed that you could hear music when you find love,” said Alzate. “But the feeling was palpable from the start. I felt that I was home. Having met him gave me a feeling of utmost serenity, which I can’t explain up to now.”

Alzate’s initial fears about his family proved unfounded. Not only is Crisostomo welcomed by Alzate’s parents, he has also become friends with his siblings, dining out and going on holidays.

Putting his background in Fine Arts to good use, Alzate, a graduate of St. Louis University in Baguio and a lover of luxury designer brands such as Gucci, Hermés, Givenchy and Celine, soon joined Crisostomo in his business.

From office and production manager, Alzate became Crisostomo’s in-house stylist for photo shoots and fashion shows. Apart from mentoring by Crisostomo, Alzate took in everything there was to know about the business. Before long, he became his assistant designer.

“I taught him the basics, but our aesthetics are totally different,” said Crisostomo in our previous interview. “He’s really a talented and driven designer.”

With Crisostomo’s blessings, two years ago, Alzate took his career to the next level by going solo almost. He finally came into his own after winning the prestigious design contest, last year’s Look of Style Award by Look Magazine and the British Council.

“That’s why I’m on the lookout these days for cheap flights,” said Crisostomo. “It’s a good thing Philippine Airlines now flies to London.”

In a glamorous milieu where temptations and fleeting relationships are quite common, here’s how the two have managed to grow and keep their relationship.

“Rense and I love to do things together,” says Crisostomo. “We basically like the same things. We travel a lot especially when our business is good. We go on short trips at least every month. We also enjoy discovering things together.

“He is an optimist and a dreamer, and I love that about him. We both know that I’m not getting any younger, so I try to be realistic. But he has taught me to always see the glass as half full and to always dream big.

“We enjoy the same food. As much as possible, we have meals together. Losing weight has been a constant struggle for me because we like to discover restaurants and good eats.

“When Rense and I get into an argument, we make sure we do not sleep until we kiss and make up. And that, I believe, has helped strengthen our relationship. Through the years, we have learned to compromise and to accept each other’s shortcomings.

“Rense is my knight in shining armor! I know I’m being very corny, but it’s true. He’s always there to defend me.”

Alzate says: “I admire Noel’s heart. I’ve never met anyone as kind as him. He’s the type who loves unconditionally talaga, and that’s very rare these days.

“He’s also very giving and kind. He tends to spoil you. Surprisingly, he tends to deny himself some of the luxuries he so willingly gives others.

“It’s great that we can communicate and level with each other. There’s really no such thing as age gap because Noel and I click in so many ways. He values my opinion. It helps that we have similar tastes.

“Of course, we argue. But at the end of the day, we always try to arrive at a compromise, which I think is the key to a healthy, long-lasting relationship. It also helps that I idolize him for his design and work ethic.

“When we’re on trips, the mood is always celebratory. Every day we spend together feels like a birthday, a New Year, a Christmas. We celebrate everything. I mean everything! We celebrate the fact that we’re healthy, happy and alive.

“I find it funny when people sometimes mistake Noel for my father. One time, I really wanted to buy something, but he found the item impractical and expensive. I was about to throw a little tantrum before the smiling salesclerk asked Noel: ‘Your son, sir?’

“We just both looked at each other and kept quiet, but I knew he was upset. Big time! True enough, when we left the store, Noel told me that he wanted to punch the guy right there and then. I had a good laugh.”

“I’ve learned so many things from him,” adds Alzate. “He’s not only my mentor when it comes to the financial and artistic sides of running a business. Thanks to Noel, I’ve also learned a great deal about compassion, patience and the importance of cultivating good relations with other people. It’s because of him that I’ve come to learn more about God.”