Lucy on Richard: ‘Be the best of friends but don’t forget to be lovers’ | Lifestyle.INQ ❮ ❯ 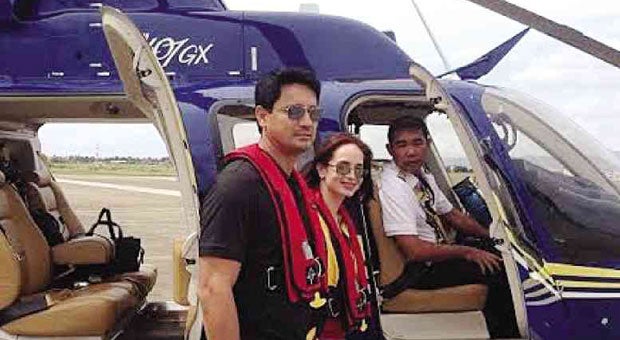 Lucy on Richard: ‘Be the best of friends but don’t forget to be lovers’

If you follow Rep. Lucy Torres-Gomez on social media, you know that she likes to share events in both her private life and her job as a public servant.

On Instagram you will find intimate snapshots of her husband and daughter and gatherings with friends, alongside her activities as representative of the fourth district of Leyte. It was one of the hardest hit areas by Super Typhoon “Yolanda.”

From Instagram alone, her 238,000 followers can glean what’s keeping this celebrity-turned-politician occupied of late. She has been helping her constituents rebuild in the aftermath of Yolanda.

“We’re an agricultural district, so we’re doing two things. First, to provide our fishermen with fiberglass fishing boats, and second, to give the farmers vegetable seeds and livestock,” she says. “We’re concentrating on that, because we’re afraid of what will happen when the aid stops coming.”

She refuses to institutionalize the culture of giving dole-outs, and she aims to empower them by giving them back their livelihood.

“After Yolanda, there’s no rich or poor. The rich lost their millions, the poor also lost their thousands. Everybody lost something.”

Her efforts are independent of the government, she says. “We’re not the only district that was hit. We can’t just sit around and ask the people to wait. The fact is, many homes are still roofless.”

She has been appealing to friends and NGOs, she says, who have been generous with their help.

“I don’t want to assume [that they’re giving because I’m a celebrity],” says the lawmaker. “I’m very careful about accountability and transparency.”

Her husband, actor Richard Gomez, who’s also her chief of staff, is a constant presence. (She ran in his stead in 2010 when he was disqualified for failure to establish residency in her native Ormoc.)

“We’re a team,” she says. “We’re very supportive of each other’s projects. And this is the first time that we’re so passionate about the same thing and in the same way,” she notes their Yolanda rehabilitation efforts.

The Gomezes have been married 15 years and have a 13-year-old daughter, Juliana. Everyone is familiar with their love story: a Southern beauty born to privilege meets her teenage crush, a dashing matinee idol. They fall in love, get married, and she leaves her quiet, sheltered life for one that’s constantly trailed by the spotlight. To this day, the beautiful couple is still among the most envied and admired in show business.

And now the once-shy heiress is also an outspoken lawmaker, unafraid to call out erring officials on the irregularities that marred aid distribution shortly after

“It’s very fulfilling,” she says of her job. “It demands so much of my time. It takes me away from my family. Often it’s just work, work, work. But this was what I was mandated to do, to do real work, so I’m doing it.”

Being in politics may not have changed the dynamics of their marriage, “but it did change the way I see things, the shape of my thoughts,” says Lucy, 39. “It’s a journey.”

She and her husband don’t fight about work, she says. They try to keep a balance and meet each other halfway. It does help that Juliana is an “easy child,” though she admits that being a parent as a whole is difficult.

“It’s hard to keep a balance between being a parent and a friend. Richard and I are lenient in different ways. He’s okay with Juliana going on sleepovers; I’m not, because we were never allowed to do that when I was growing up, though it was okay for us to have friends over.”

Juliana is athletic like her dad, but “she’s more like me when it comes to working with her hands. She’s also into art,” says this mom.

After 15 years, the Gomezes have reached such a level of familiarity that this wife is stumped when asked if she still discovers new things about her husband.

“We know each other so well now. You know, that kind of bond when you see the other from across the room and you know if they’re enjoying or if they want to go home now?”

Even then, she says, “He still takes my breath away. He does things that are very endearing. He’s spontaneous. He does things even when there’s no occasion. I’m more the milestone kind, so I guess I’m more predictable.”

Their fans might be surprised to know that, in the Gomez household, days like Valentine’s are not fancy, extravagant affairs. “We don’t have to mark every event in a grand way,” says Lucy. “We’re not ma-drama that way.”

5 things to keep the love alive according to Lucy:

1. Be the best of friends but don’t forget to be lovers.

3. Continue to grow as individuals. Allow him to pursue his passions in the same way that you also make a go of yours. That will keep you interesting and interested in each other.

4. Spend time together. There are no shortcuts, nothing comes from nothing.