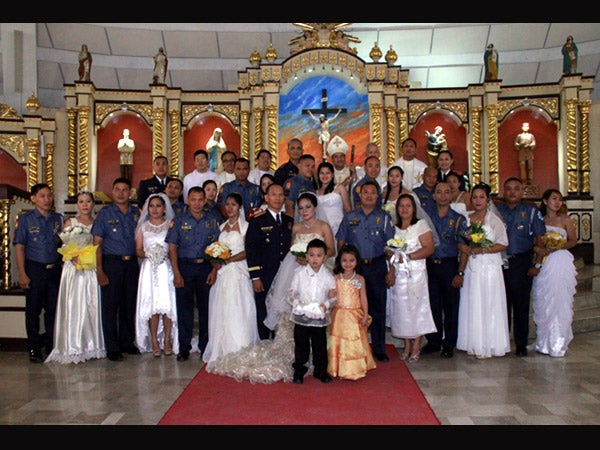 Twelve policemen and their wives exchange marriage ‎vows in a Philippine National Police-sponsored mass wedding on Frida, Feb. 14, 2014. Senior Superintendent Romulo Esteban of the directorate for personnel records management‎ chief in Bohol, and wife Yolanda is the most senior couple among the 12. CONTRIBUTED PHOTO BY PNP Public Information Office.

Cop, wife’s secret to 25 years of marriage: My wife is commander

MANILA, Philippines — Senior Superintendent Romulo Esteban may be the chief of records. But is there’s one record he wants to keep, it’s certainly his 25-year marriage to wife Yolanda who, he acknowledges, is the “commander” in his home.

At the same time, Esteban said being faithful to one another was also important to a happy marriage.

“Dapat laging tapat sa pagsasama. Ako kahit na chief na ako, pagdating sa bahay si misis pa din ang commander (We should always be loyal to our partners. Despite me being a chief, as soon as I get home, my wife is the commander),” said Esteban who, after marrying his wife in civil rites 24 years ago, celebrated their 25th  by renewing their vows in Church, along with 11 other policemen and their partners at a mass wedding sponsored by the Philippine National Police Chaplain Service.

“We chose to join the mass wedding on a Valentine’s Day since it’s also our Silver anniversary,” said Esteban, chief of the directorate for personnel records management in Bohol.

The couple is blessed with two children.

The mass wedding Friday at St. Joseph Chapel inside the PNP headquarters in Camp Crame.was officiated by Reverend Father Bernardino Cortez, the Auxiliary Bishop of the Archdiocese of Manila and graced by Chief of Directorial Staff Deputy Director Marcelo G‎arbo.

Director General Alan Purisima, PNP chief, and the PNP Command Group stood as the principal sponsors of the 12 couples, who would also receive cash gifts.

According to Garbo, the wedding rites allow police personnel to legitimize relationship with their partners consistent with the standards of “morality and decency espoused by the PNP.”

He stressed that the PNP has high regard for family life, marital fidelity and sanctity of marriage.

Apart from the mass wedding in Camp Crame, similar rites were also held in different police regional offices and units.