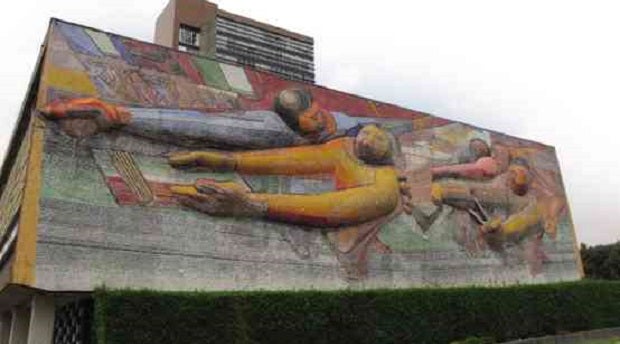 Most students of the University of the Philippines Diliman are probably unaware that there is a mural in the main lobby of Palma Hall, the largest building in the campus.

The mural is a surrealist piece by National Artist Vicente Manansala. It has images that speak of the quest to balance matters of the heart and the brain, to find a happy medium between science and the arts.

The Palma Hall painting’s uncelebrated status is so unlike that of the artworks in the Universidad Nacional Autonoma de Mexico or UNAM. In many ways, UNAM is the UP’s counterpart on the other side of the Pacific. Both are the largest and highest ranking universities in their respective countries, and there are many similarities between the two.

They were founded just a couple of years apart as a reaction to older schools influenced by Roman Catholic perspectives. Likewise, both had urban campuses which had become so overcrowded that, in roughly the same period, the 1930s to the ’50s, both took steps to move operations to larger properties outside the city.

When we review how these new school sites were developed, however, we will see some interesting differences. The nonpresence of the Manansala mural that we had noted earlier may well be related to the fact that painting does not seem to play as important a role in the structural fabric of the Diliman compound as it does in the Mexican one.

As was very evident during our recent visit, the visual arts were cherished at UNAM. Huge murals were splashed across the facades of prominent buildings shouting passionate messages about Mexican life.

As we learned later on, the entire UNAM campus, which is also referred as the Ciudad Universitaria, was conceptualized and built to express the essential ideals of the Mexican nation.

We suppose UP Diliman could not have been planned as a canvas for patriotic fervor since it was first mapped out under the auspices of an invading power. Mexico, on the other hand, had already come out of two successful revolutions by the time her premier state university was established.

To create this haven of learning for a brave new world, the Mexicans chose a 700-hectare site that was mostly covered with hardened lava flows from the last eruption of the Xitle Volcano. The igneous landscape added meaning to the setting of the future university. All the attributes long associated with volcanoes which were symbols of power and creation could be passed on to UNAM.

During the inauguration rites, one speaker intoned: “We are laying one more stone in the fervent construction of our Mexico.”

The task of planning the Ciudad Universitaria fell on Mario Pani, Enrique del Moral and Mauricio Campos. They were eventually joined by about 150 more architects and engineers.

The school’s founders sought to maximize cooperation as a manifestation of the populist spirit of the Mexican Revolution.

Even the layout would already be loaded with symbolism. The Science buildings were positioned at the very heart of the complex, indicating that it was this academic branch which held the key to Mexico’s development.

Buildings were clustered around an enormous mall, evoking Spanish plazas but also the so-called superblocks with gardens at the center as advocated by Le Corbusier.

These spatial cues signaled a break with Meso-American traditions. The new university was to embrace the progress which Western modernity would bestow. The only glimmer of indigenous ways could be discerned in the terraces of lava on which most school edifices stood.

But what really caught our eye were the fabulous outdoor artworks for which the scholastic city is justly famous. The Medicine College had Francisco Eppens’ “La Vida, la Muerte, el Mestizaje y los Cuatro Elementos” which spoke of the building blocks of life as well as the resiliency of the hybrid Mexican race.

We saw a masked being holding up an ear of corn while being encircled by a gigantic snake swallowing its own tail. This is a meditation of the mutability but also of the continuity of life.

UNAM has an Olympic Sports Stadium, its rambling expanse like the gaping calderas of the country’s volcanoes. One wall has a Diego Rivera mural, the title of which refers to the university, family, and sports life in Mexico.

We were especially impressed with the Administration Building or Rectory with its gargantuan “sculpture paintings” by David Alfaro Siqueiros. The first of these, “The People for the University, the University for the People,” required a three dimensional base of steel and concrete on which countless bits of glass were applied. The result was a sensuous, shimmering surface not unlike the skin of a colossal serpent.

We saw figures holding up a compass, a scale model, and a book. These most likely indicate that education could be a liberating tool for the working masses.

Initially, we were puzzled by another Rectory work which had what seemed to be dates: 1520, 1810, 1857, 1910, and a cryptic 19?. Then we remembered that 1520 saw the main battles of Hernan Cortez’s campaign to conquer Mexico which ended in 1521 with the fall of the Aztec capital. Coincidentally, the latter date was also the year of the Spanish discovery of what was to be the Philippines.

Mexico won its independence from Spain in 1810. We later read that 1857 marked the propagation of the liberal constitution while 1910 was the second Mexican Revolution.

The date with the question mark then indicated the enigmatic future of this fascinating nation.

Just beyond the Rectory stood UNAM’s most captivating building: The Central Library. Though its structure is quite straightforward, it has, as one writer opines, achieved the same iconic status of the more effusive Sydney Opera House.

This is largely because every side is covered by the wonderful mosaic murals of Juan O’Gorman.

Completed in 1952, the mosaics speak of the mythic and philosophical dimensions of Mexican life. The South facade depicts the Mexican domain before the coming of Spain. We saw the waters that surrounded the ancient Aztec capital, Tenochtitlan. We also saw the many gods of life and death, some of which had a dual nature indicating that all existence was a continuum.

In the left corner we espied a pyramid topped by a temple. At the center we encountered the open palms of the goddess Coatlicue.

Just below is an image of an eagle with a snake in its beak, standing on a cactus. This refers to the foundational myth which is at the core of Mexico’s identities.

The Northern façade narrates the saga of colonization. Filling up the space are two great orbs representing the Ptolemaic and Copernican world views. The former is the perspective which held that the earth was the fulcrum of the universe. This was challenged in the 16th century by the latter which substituted the sun as the pivot of all things.

The gnawing sense of displacement that this cataclysmic mind-shift brought would eventually give the West the vigor to develop the technologies with which to conquer the planet.

The Aztecs were one of the peoples that fell before this European onslaught which would eventually overrun the continent.

We saw the emblems of the conquest everywhere in the mural. We noted how the deities of old have been replaced by the Virgin Mary and Cortez, how a pyramid has been topped by a church. We also noticed how Coatlicue’s palms are now the hands of Christ bearing the marks of his crucifixion. What a gripping narrative to have spread before us!

Surveying all these as we finally retreated from the complex, we thought that it was, indeed, an apt set of images for a library building. For it is certainly the job of a repository of books to shake us, to rock our world.

The students of UNAM are fortunate. Theirs is a university whose founders understood that every wall and every stone should be able to proclaim what a nation believed in and what it hopes to become.

We thank our former boss, the Hon. Porfirio Munoz-Ledo who first told us about UNAM, his alma mater. Our gratitude, too, to the Mexican Embassy in Manila for assisting in our trip.