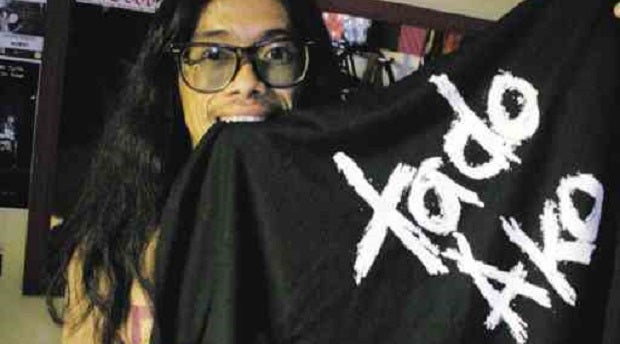 Eight years ago, Inquirer Super sent me a message that Rock Ed was to be given the “I am Super” award. It was to be held in the then-superclub called Embassy.

We thought it funny that an antipoverty awareness campaign was to be given an award in such a burgis venue, but we appreciated it, nonetheless. I told my good friend Tado Jimenez my anxiety about the event and he asked me, “Ba’t ka ba nag-aalala? Party lang ’yon na may take-home trophy!” I said it was nothing, really, so I just said, “Well, wala akong masusuot.”

So I asked him if he could be my escort and then we’d bring the rest of Rock Ed onstage as well—actor Ronnie Lazaro, entrepreneur Jaime Garchitorena, teachers and young professionals who were very active from the beginning.

On the night itself, Tado met up with me by the gate of the club with no shoes, no shirt, with jazzed-up red pants and angels’ wings attached to his thin frame. He even had a tin foil halo on his head and said, “Sa anak ko ’to.” We went in, got our award onstage, drank for free, partied drunk and danced on the floor.

Everything went well, and I remember he was the first one who suggested we leave since his nipples were frozen na daw. That night, I showed up in khakis and a black shirt and slippers, to which he said, “Wow, mag-shopping ka na nga ng mas makulay at makinang na damit, baka manalo tayo ulit next year!”

One time in Baybay, Leyte (we took a lot of trips together, you see), he wanted our rented van to go around one bend by the coast just so he could point out to me where he used to jump into the water as a kid, diving for coins that tourists threw down. He was so scrawny and tiny that people were always shocked to see him run, dive and swim like he did. “Akala nila yata toddler ako kasi ang liit ko eh, pero Grade 1 na yata ako noon.” Then he laughed loudly. And I laughed along with him.

I asked him how he got to Manila, became an activist and  ended up in show biz. He said he opened a T-shirt shop in Marikina that moonlighted as a tattoo parlor.  He silk-screened most of the shirts himself assisted by his wife Lei. He also bottled antibacterial gels whose scents were named after his daughters, Taja, Dyosa, Indi and my goddaughter Tila. He also fixed up bikes, rallied for and with the labor sector, partied with friends, managed a band, fronted a band called Live Tilapia, hosted everything we held in the provinces, hosted Luneta gatherings pushing for issues, was part of the backbone of Dakila, an organization pushing for everyday heroism; and above all, he made people laugh.

Of course, there was the shirt with a politically incorrect slogan that he wore on a TV program which drew the ire of a gay celebrity. But like what I told  a friend who’s still irate at the memory of that incident, “My God, if our lives were judged solely on one quote…” And I stick by that. I respectfully ask everyone else to shut up about it for now, while Tado’s wife and daughters grieve.

In as much as he made people laugh, Tado also made people think and move. He had many projects, his to-do list probably never fully crossed out by nightfall. He’d sometimes call me in the middle of the night and ask for the Office of the Ombudsman’s number because he had a Marikina official to complain about.

Sometimes he’d call me with those one-liners referring to things we talked about months, even years, back.  Like he’d remember a conversation, think up a conclusion, then call me with just the conclusion. Like an overdue, hanging closure he needed to toss my way. I got used to it after a while. One time I asked him, “Ba’t ba ang hilig mo mag-one-liner tapos babagsakan mo ako ka’gad ng telepono? Masyado ka namang pa-poetic!” To which he’d say, “Ha? Hindi no! Nagtitipid lang ako sa load.” Then he’d laugh loudly, then I’d laugh along with him.

In this world and life, there will always be lines. Lines to stay within or lines to cross. Divisions between what’s appropriate and what’s otherwise. Then you come across people who erase these lines for you. Tado was one such person. He raised and lowered bars for us to cross, making us braver because what would’ve been perilous leaps all of a sudden appeared to be effortless strolls because he erased the stripes on the life floor.

Tado was absurd, improper, minsan super-labo, enlightening, enchanting when he wanted to be; he was earthy, real, funny, irreverent, rude, silly, stupid, thoughtful, present, loud, silent and highly intelligent. He was absurd because the truths he faced, the truths WE still face about the Philippines, are absurd. He lamented about the state of affairs and said (once in a drunken moment in Cubao) that he was just mirroring realities because the Philippines needs to see how we put up with things that are completely ridiculous. I believe him. We all needed him around us. God knows, we still do.

I was part of the team that picked up his remains from Bontoc General Hospital. Friends brought him home to his beloved Lei, waiting in Marikina with Taja, Dyosa, Indi and Tila—hinatid namin siya with dignity. It was our honor to do so. It was the last physical favor we could do for a friend to whom we all owed so much.  Unquantifiable debts we owed our old buddy who made us laugh. While standing inside the makeshift morgue, my nose bled through my face mask, maybe because of the chemicals or the change in temperature, I wasn’t sure. While the dark mark spread like a Rorschach test on my mask, I laughed because when we used to talk politics and I’d use an English political term, Tado would say, “Ang dami mong English, Gang! Hindi siguro dumudugo ilong mo kailanman.” And right there, whether by coincidence or by some supernatural ewan, it happened. My nose bled.  I think the universe just made me laugh with him one last time.

Last Feb. 7, when an unregistered, illegally plying GV Florida Bus crashed at the foot of a mountain in Bontoc, the world was hushed a bit. It is now a little less funny. Sadder, for a time. I will laugh a bit less now. I am so sad.

My silliest friend is gone, how could this be?

Gang Badoy Capati is the founder of Rock Ed Philippines, a writer for Esquire Philippines, a volunteer of Dakila and the godmother of Tado’s youngest daughter, Tila.