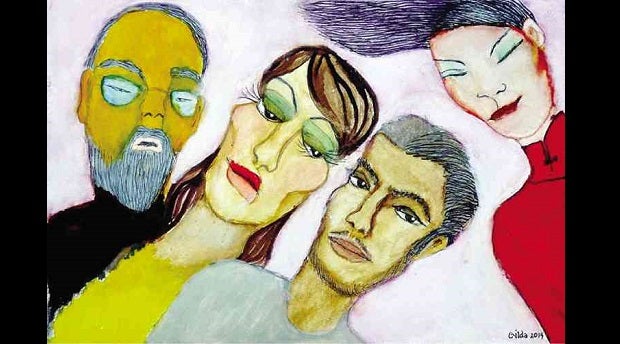 “CHINESE geomancers read the future of an engaged pair,” art by GCF 2014

How difficult it is sometimes to distinguish love from intrusion, from what is ignorance, from what is good intention gone awry; or to untangle love from possessiveness, from discipline, from cariño brutal or from plain lousy delivery.

And so it was that, one day, a dear friend whom I had not seen in a long time came to visit. Barely had she sat down when she asked, “Gilda, do you still believe in God?”

My knee-jerk reaction was to retort, “None of your business!” But I decided to be good. I could have just answered, “Yes!” But I knew it would just lead to a sticky and pointless discussion on what one’s idea of God was.  Instead I called the maid for some merienda.

But, soon enough, she was back on track. Did I still receive the sacraments? Did I still go to Mass? Did I contribute to the support of my pastors?

It must have been as frustrating for her as it was exasperating for me. She left with both our unspoken resolve to pray for deliverance of each other’s endangered souls. We kissed and parted, still friends.

But was I incensed! I told my son (the most prayerful one) about it and he said, “Ma, can’t you see that as just a manifestation of her love? She really thinks your views are leading you to a bad end, and she will do what she can to prevent it.”

Well, that was quite another view. I tried to understand it and eventually accepted the good intention. For, indeed, some may call fanaticism the love of a father who flagellates himself bloody on Good Friday or joins the rowdy procession of the Nazarene to set straight a drug-addicted son. But love nevertheless it is.

Another guy, 10 years into a quiet, gay relationship, was asked by his aging, gravely ill mother who no doubt knew about it: “Son, when will you get married?”

Such questions can only break people’s hearts. But its subtext is the same: I love you.  Let us be together in the afterlife.

How poorly indeed we read love. On a nonreligious point, I remember my strictly corporate mate decided to surprise me once by having pin lights installed over my collection of paintings on the sala wall. Go look, he said.

I did and almost fainted. The pin lights were red, yellow and green! “Da-a-d,” I said, “you could have asked me!” He threw up his arms in exasperation: Can’t I ever do anything right in this house?

I really felt sorry. To this day I still wonder whether I should have spoken up, or just borne up with the red, yellow and green gift!

If hell is paved with good intentions, so do good intentions pave some earthly assumptions.  The patriarch of a big family took great pains to acquire a green card so he could petition all his seven children. He was sure they would have a better life in America. Imagine his shock when none of his children wanted to go! Poor dad, their hearts were committed to the Philippines.

One child may express her love for an ailing parent by smuggling to him all the chicharon and forbidden candies he craves.

Another believes in keeping the sick man well by keeping the room antiseptic, the patient’s medicines regular, the diet strictly per doctor’s orders.

One wealthy matron’s unwavering motherly love was to raise her big brood to be hardworking, disciplined, successful and thrifty. To this end, she never allowed them instant gratification. For instance, when she brought them to a bookstore, it was only to acquaint them with books, never to buy the books they wanted.

Did the mother produce hardworking, disciplined, thrifty and successful children?  Yes! As adults, though, they often wondered why they had to abnegate so much since they were well-off. Were they happy? That was not the point.

Some old people like to know and read all about death. Others are terrified of death and will avoid any talk on the subject. (In one’s dealings with old people, don’t mistake one for the other).

Some people like to plan their death, from what clothes and jewelry they’ll wear, what songs will be sung, what flowers to have around, how the ceremony will go. Others just want to be dead. Let their children decide everything.

One family member, however, may see it a different way—that having the courage to pull the plug is the greater kindness.

One pretty lady, widowed very young, couldn’t let go of her husband’s memory that she celebrated it by wearing widow’s weeds for more than 20 years. Fortunately, black became a normal color and, thankfully, she began to just look fashionable instead of morbid.

Some old people prefer to be surrounded by many relatives living in the house with them.  They enjoy the fuss, the noise, the attention, even the extra expense. They are comforted by the endless TV, the ceaseless patter of feet and clanking of plates. And they feel loved.

Since I got widowed, I don’t know how many offers of home companionship I’ve been offered. They loved me and were concerned that I’d be “alone” and therefore “lonely.” (No men asked me!) “You mean you’ll be living only with the help?” was a main concern.

The cook has been with me 42 years; the driver who comes in the day, 18 years; the gardener-handyman, 12; and the part-time clerk was someone dad sent to college. Besides, I really preferred to be on my own.

That’s why it’s very easy for me to understand friends who are gregarious like me, but also value aloneness. Someone explained to me that it was impossible for her to watch the sunset alone on the breakwater. The person or persons who brought her there would insist on keeping her company—because it’s dangerous, unnatural or simply not done.

Some of the most genuine offers of love become annoying because there is no awareness that they demand more of the receiver than its giver. The more open of the two individuals should try for a wider perspective to understand where the other is coming from.

Perhaps learning how to read love is trying to figure out what a person really wants, instead of insisting on what one thinks is better for her. And allow her to do it.