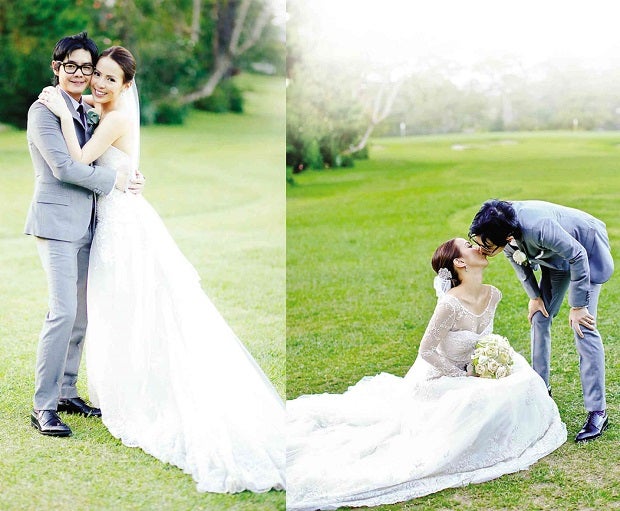 GP Reyes and Andi Manzano. After two happy years, they vow “till death do us part” and seal the deal with a kiss amid cool Baguio air.

GP had always found Andi super attractive and unpretentious, so he tried to meet her through the traditional route by a “bridge”: Andi’s cousin, Lucky Manzano.

Lucky immediately called her up and said, “Hey, my friend GP has a crush on you, can I give him your number?”

Understandably Andi refused, because she didn’t even know who GP was at that time.

Luckily (pun intended), GP didn’t give up so easily. He quickly sent her a trés nice and proper message on Facebook:

They started a cyber friendship and, after a month, she agreed to meet him, palangga.

She said she would be at Barcino’s in Greenbelt 2 in Makati with her cousin. He arrived in a suit trying, he said, “to look debonair, suave and cool,” when, in fact, he was sweating all over because he was nervous and it was really hot.

Since then, they’ve been inseparable. He met her parents and they have traveled abroad almost every month for the last two years.

“In spite of all evidence to the contrary,” Andi told moi, “true love does, indeed, exist and when you find it, it’s never hard. In fact, it feels so natural, instantaneous; it’s so automatic.”

Coming home from one of their many trips, GP proposed to Andi at the arrival area of Naia 3. As they walked out of the baggage carousel, one by one different singers began to surround Andi, until an entire flash mob were singing in chorus the song that Andi had sent to GP via YouTube when they started dating—“Marry Me” by Train.

GP then got down on one knee and asked her to be his wife, and she joyously said, “Yes!” Now if that ain’t love, what is, n’est ces pas?

GP and Andi chose to be wed in Baguio in part because it was one of the first places where they had dated out of town. So, it was some sort of a homecoming for them, a return to the scene of the crime, as it were.

Porsche fanatics, GP and his buddies drove up in various sports cars to the country’s summer capital, forming a fast and furious convoy up Kennon Road.

Before the wedding, Andi had a special bowling tournament for her friends, while GP organized the GPR golf cup for his buddies.

Aprés, the couple hosted a rehearsal dinner for members of the entourage and sponsors at the Hilltop restaurant the evening before the big day.

And then at 2 p.m. the following day, a wonderful and truly emotional ceremony was held at St. Joseph’s church as GP, escorted by his mother, beautiful Daisy Izon, and his four brothers Paul, Jappy, Chuck and Francis, waited at the altar.

The radiant bride walked down the aisle escorted by her good-looking parents, Bobit and Rose Manzano.

Surrounded by gorgeous blooms, the couple exchanged “I do’s” and kissed to the wild, er, I mean wild applause of all their friends and kin.

The glorious reception for 300 guests followed at the prestigious Baguio Country Club, dahlings. Guests were rolling out of their seats because of the uproarious toasts and speeches in praise (or grilling?) of the lovebirds, palangga.

Next was a mini concert from Andi’s tito Gary Valenciano. Then the top DJs of Republiq, Opus and Privé  had the guests dancing till early morning. Would you believe that the high-gear party was such that it ended with the sun actually melting the thick of fog that covered Baguio? Now, that was high-adrenaline party that was hard to beat, dahlings.

Truly it was a magical weekend—a grand celebration of love and romance.

Cheers to my two palangga! May their Valentine’s last forever!