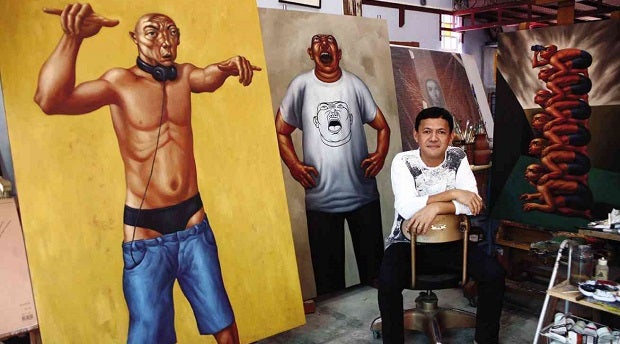 PAINTER Elmer Borlongan in front of two new large-scale canvases that will be on display at Art Fair Philippines 2014. The pieces for his retrospective at the Ayala Museum were collected two weeks ago. KIMBERLY DE LA CRUZ

The drive to San Antonio, Zambales, to visit artist Elmer Borlongan took a little over three hours. This was five hours shorter than when he first made the trip as the first artist-in-residence at Casa San Miguel in the early 1990s.

“The eruption of Mt. Pinatubo in 1991 had made the roads very difficult to traverse, so I remember the bus ride taking eight hours,” he said.

Not that it bothered him. Since Borlongan had no car and didn’t know how to get to Zambales, he had to be accompanied by one of the owners, Plet Bolipata, whom he ended up marrying a few years later.

Although they first settled in Mandaluyong where Borlongan is from, the couple decided to leave the hustle and bustle of the city and moved to Zambales in 2002. The sprawling property had been cloaked in lahar, but Plet’s mother, the Bolipata matriarch, almost single-handedly oversaw its rehabilitation.

Anyone who has seen Borlongan’s works before and after 2002 might notice a number of differences. When he was still based in the city, his paintings captured urban blight. His canvases were peopled with the gaunt masa trying to eke out a living on city streets, and the colors were darker, more somber.

“The colors I used then were mostly earth tones and grays including Payne’s Gray, which is a stormy gray that changes color when you mix it with black or white,” said Borlongan.

Once he and Plet moved to Zambales, however, he began drawing more rural scenes: vendors carrying a basin of freshly caught fish, a family seated in what looks like a fabric boat.

His colors were also brighter. He couldn’t help it because, in the province, colors seem more saturated, more alive.

“When we moved to Zambales, we didn’t have a house, so we first lived with my in-laws whose house was located within the Casa San Miguel property. It took four years to build our own house, and for a long time it didn’t even have a roof,” Borlongan recalled

This didn’t stop him and his wife, who is also an artist, from creating. Even before the big move, he had trained himself to paint practically the entire day.

“When we were living in Mandaluyong, however, there were so many distractions. People would be calling and there would be exhibit openings to attend, artist friends to meet. We would often end up at Art Walk at the fourth floor of SM Megamall back when it was busy.”

Now, the Borlongans have their own perfectly sized studios located side by side where he works from 8 a.m. to 5 p.m. every day.

“I wake up at 6 a.m., have breakfast, and walk our dog Henri (after French painter Henri Matisse) around the property,” he said.

By 8 a.m. he is at the studio sketching ideas or painting on one of his large scale canvases. Borlongan also rediscovered his passion for vinyl records. He plays rock music such as Led Zeppelin on most days, because he finds that he works faster this way.

“When I got a record player, I went to all my friends who had borrowed records from me through the years and asked them to return them. I ended up getting even more since they no longer had any need for their own records.”

Listening to Borlongan speak, one gets the feeling that he is blessed with a photographic memory and a grateful heart. He remembers the names of people who have done him a good turn in the past, naming then and narrating how they helped in whatever way.

Articles always mention that he received training at 11 years old from visual artist Fernando Seña, but Borlongan’s father also made him undergo drawing exercises at home.

“My father would tell me to draw objects from different angles. For example, I would draw a bottle from all sides as well as from the top and the bottom. This way, I learned the basics of 3D, unlike most young children whose drawings are flat and two-dimensional.”

Borlongan also recounted that it was his aunt Fely Borlongan-Anama who first suggested that he take up art classes with Seña, after she had met and done a story on him. Since Borlongan was a scholar of sorts and did not have to pay for the classes, he would stay behind to help clean up the classroom and erase the blackboards.

“My classmates would sometimes leave small bits of pastel crayons lying around, but I would pick them up and collect them since they could still be used,” he said.

Back home in Mandaluyong, the young Borlongan would re-echo what he learned from his teacher to a bunch of young kids who also liked to draw.

“Sena always said that we should share what we learned from him with others. This is why I also give classes here at Casa San Miguel during the summer,” he said.

This heightened sense of frugality and of making the most of what’s available has served Borlongan in good stead. While some of his contemporaries have been forced to sell off most of their pieces to make ends meet, Borlongan still has a sizable collection, especially after his wife told him they should keep at least one from each of his collections.

He also sought paid work, which included doing charcoal and pencil sketches to illustrate fables in the lifestyle section of the defunct Manila Chronicle.

“The editor only asked for the photocopies, so I ended up keeping the originals. Last year, the book ‘The Cat & the Bat and Other Fables’ was published by Canvas and features those same sketches I made 20 years ago.”

On Monday, Feb. 17, a total of 44 paintings by Borlongan will be on display at the ground floor gallery of the Ayala Museum. The 20-year retrospective exhibit “In City and Country: Elmer Borlongan, 1992-2012” will be on view until April 6.

Elmer Borlongan will also hold an art class for children on April 5. Call 7598288.