Building a home out of clay | Inquirer Lifestyle 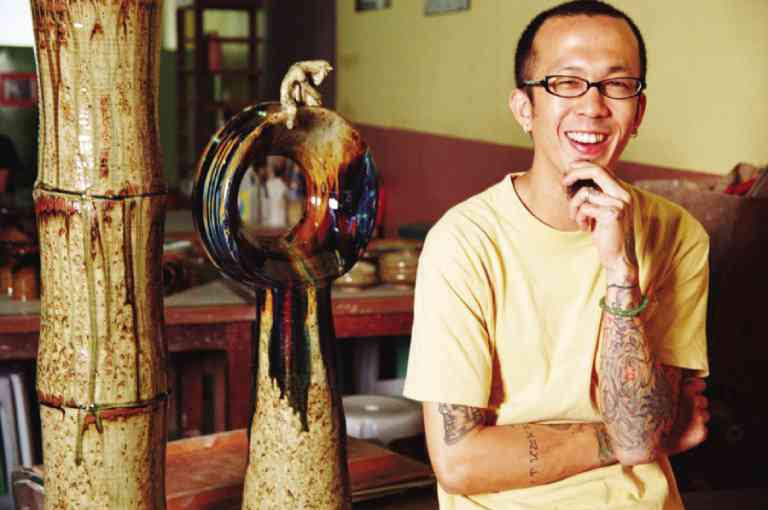 Building a home out of clay

The objects, gorgeously glazed, sensuously curved and loaded with more texture than you would believe possible in this medium, are shot through with references to the Philippines—a haphazard-looking bahay-kubo, bulol heads with enigmatic expressions, bamboo of varying lengths.

The title of ceramics artist Hadrian Mendoza’s upcoming show at the BenCab Museum in Baguio, set for Feb. 18-March 18, says it all: “Home, Sweet Home.”

Now based in Virginia, US, Mendoza is exhibiting in the Philippines for the first time in a while, and he’s making up for lost time: a concurrent show, “Deconstructed Rings,” this time featuring pieces with less obvious but nevertheless thought-provoking meanings, runs  Feb. 13-March 3 at  Ayala Museum.

“‘Home, Sweet Home’ represents my homecoming exhibition in the Philippines, the first since I set up a studio in Virginia in 2009,” Mendoza explains. “While in Virginia, I created pieces with images associated with the Philippines. Having these pieces around me made me feel at home, and brought me back to my studio in Mount Makiling.”

The connection is almost uncanny; although the works were created between March and June 2013, Mendoza feels there were already suggestions of the chaos that was Yolanda, such as in the battered, empty huts he fashioned from clay. “In the end, it will still be home, sweet home.”

Mendoza’s route has been a tug-of-war of sorts between the Philippines, where his roots are, and the United States. He discovered pottery as an elective course in his senior year of business studies at  Mary Washington College in Fredricksburg, Virginia. Exploring the medium at  Corcoran School of Art in Washington, DC, he was awarded the 1996-1997 Anne and Arnold Abramson Award for Excellence in Ceramics.

Mendoza came to the Philippines in 1997, where he worked with potter Jon Pettyjohn, put up his studio at the foot of Mount Makiling, taught pottery and had his first one-man  show at the Metropolitan Museum of Manila, “7 Months in the Philippines: A Diary Created Through Clay.” He married artist Kim Dacanay in 2005.

Numerous shows all over Asia followed, and as a moving force in regional contemporary ceramics art, Mendoza was awarded the 2007-2009 Toyota Foundation Grant to organize Ring of Fire, the first Southeast Asian Ceramics Festival in Manila; and the Futo Industries Grant for Clay Unity, the second conference, held in Fuping, China. The third conference will be in Virginia in October of this year.

In 2009, Mendoza moved his growing family back to the US, “because things got a little dangerous where my studio was in Makiling. Daily life wasn’t as pleasant as it was before. It was difficult to work, there was a lot of stress.” He is now the resident artist at The Workhouse Arts Center in Lorton, Virginia.

What took him so long to come back? “Well, it’s been four years and two months—that’s too long,” Mendoza admits. “I want to stay active on the Philippine art scene, and I will attempt to do a solo show here every other year. I just needed time to reset my mind before I came back; the last year I lived in Makiling was pretty crazy.

“When we moved to Virginia, I focused on establishing myself in a new environment. It was an interesting journey. But in the Philippines, you have your own space, you work with local hand-processed clays that have a lot of character. The ceramics artists are friends. We jam together, work together and exhibit together. It’s more close-knit.”

Mendoza has always been adventurous in his work, speaking with an eloquent visual vocabulary that is primitive and polished, solid and precarious at the same time.

The eloquence hasn’t changed. For the Baguio show, the bulol figures prominently, because he considers the iconic granary god “a powerful yet quiet sculpture. I’m always drawn to the face, the trance-like, silent look.”

Lest he be accused of taking himself too seriously, perhaps, there’s a wry variation in the 45 self-portraits collectively titled “Space Invaders,” each one treated differently. “Some have one lens of the glasses, some have two; some have eyes, ears and hair. None have mouths. All these small differences in facial features and firing effects stimulate the mind. When you see the whole installation, it’s interesting how all of these dynamics work together. It’s eye candy.”

Meanwhile, the rings for the Ayala show are breathtaking in their smoothness and richness, with the perfection suddenly broken by space or variation. “Kalabasa,” for example, inspired by a sliced squash, is smooth on the outside but marked by a deep gash in the middle. (We tell him it reminds us of a fortune cookie.)

“This show is about taking apart something whole and perfect, which is a circle. I break it down, slice it and destroy it. Then I take the pieces and attempt to make something beautiful out of them, to find balance with these parts. Sometimes perfect circles aren’t the most beautiful things. Sometimes we have to break things down and reconstruct. By doing this, you bring new life into a piece. If it doesn’t work, there’s always another ring!

“My vision has always been the same,” he continues. “Shapes that dance from one form to the next, with slight changes. Like telling a story. I always try to do something new, but I’ve forced myself to slow down a bit. When I come across a particular shape, I work it longer. Maybe I will make 10-12 of a series now, with small variations, whereas before, I would only do about two or three. By doing this, I discover more subtle changes which could be very strong, too.”

Mendoza has no problem with the notion that pottery is primarily of utilitarian value, with aesthetics coming in second.

“To me, being able to create something utilitarian is an advantage. I can make plates, mugs, bowls or trays which people use in their everyday lives. It’s a deep connection between the artist and client—a piece that is used every day. On the other end, I can also make heads that just go on a wall.”

So yes, Mendoza admits, the Baguio show is about “being homesick, and also building a home out of clay. My family and I always miss the Philippines, the lifestyle, the clay, the food, the mountain, the art scene, the musicians, the sunsets, the beach, the fire… what I miss most? The wind blowing in my face, while watching a sunset on  the beach.”

Thus, while the balancing act of creating, teaching and taking care of children Banaue, 7, and Roja, 5, while Kim is at her day job at the World Bank gives Mendoza a steady routine for now, you can already guess where his heart is.

“So I opened the ‘fortune cookie,’ ate it and read the piece of paper. It said, ‘For now, we will work in Virginia. But someday, we will live in the Philippines.’”