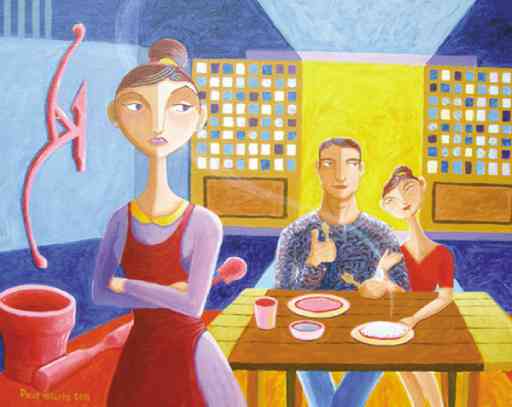 Broad strokes, grand gestures and the art of romance

Gallery Big’s Valentine group exhibit, “The Love Show,”  locates love in the broader realm of passion, and manages, without being overbearing, to interrogate love’s performative dynamic and the often unquestioned rhetoric of commodified romance.

J. Elizalde Navarro’s “The Session” provides viewers a glimpse of the National Artist’s creative process.  A woman poses naked before a faceless artist.  Curiously the work is framed from the vantage point of the viewer who, as such, necessarily becomes the invisible third subject in this love triangle, a transactional tableau with strings attached where both model and artist stage a performance of embodiment and skill.

Marcel Antonio’s “The Eternal Husband” is also a ménage-a-trois of sorts.  In his composition, the artist lays out a surreal narrative of mystery, deceit and entrapment.  Amid a backdrop of verdant foliage, a woman shares an intimate moment with a man.  Elsewhere in the visual plane, a pair of eyes, engulfed in the dark, watch in secret.  What illusions, whose memories, are being conjured here?  What indiscretions need penance?

Antonio Austria’s “Mahalan,” rendered in naïf style, effectively strips any hint of vulgarity and malice from its interlocked subjects, framing the erotics of coitus in the intimacy of singular moments and spatial confinement.

“The Kiss” also gets a playful makeover courtesy of Roel Obemio’s re-imagining.  Gustav Klimt’s gilded couple is replaced by rotund cherubs, relocated from European fin de siècle romanticism to 21st-century   kawaii.  In Obemio’s reworking, we are treated with a dose of whimsy and educated in the corporeal possibilities of affection.  Love, on Obemio’s canvas, is an enfleshed experience, materialized in bodies of differing shapes and sizes.

Maya Ladyong’s “Geisha (in the Field of False Love)” speaks of a different social dynamic altogether.  Her courtesan, demure and perfectly coiffed, appears stoic and beautiful but is really no more than a paper doll, a simulacrum drowning in a sea of illusion.

Susan Fetalvero Roces’ “Para Ti” depicts a woman, her back to the viewer, as she prepares to go to an unseen stage before her.  The graceful contour of her body, even at this tentative moment, evokes the promise of an inspired dance enactment, the kind that is in itself a gift of profound generosity for those lucky enough to witness its performance.

Clarence Chun’s “Until You Can’t See Land, You Swim” takes its inspiration from the Hawaii-based artist’s love of the ocean.  A paean to Hawaii’s majestic waves, Chun’s work also echoes the rhythmic qualities of love and desire, its highs and lows, its certainties and confusions.

The exhibit also manages to throw in a few dialogical pieces for good measure.  The contributions of husband and wife artists Angelito Antonio and Norma Belleza, taken together, make for an interesting take on familial devotion.

So do the two pieces by Jaime Gubaton, both beautiful renditions of childhood innocence that, viewed side by side, form a diptych celebrating sibling revelry.   Gubaton skillfully peoples his canvases with emphatic, everyday faces in a style akin to portraiture, and in so doing gifts his viewers with a sense of warmth and familiarity.