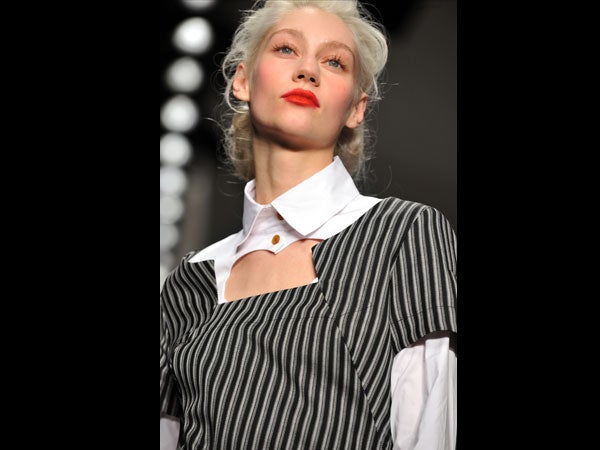 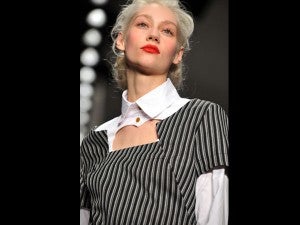 LONDON – Paul Smith brought Paisley prints and pyjamas to the catwalk at London Fashion Week on Sunday, while Vivienne Westwood took a look through her back catalogue for a thoroughly English collection.

On a day filled with shows by established British names, Greek designer Mary Katrantzou also showed her maturing style with a line of clothes drawing on symbols from around the world –including road signs.

To the soundtrack of a mash-up of Fleetwood Mac’s greatest hits, Paul Smith’s autumn/winter 2014 collection was a mix of printed silk dresses, pyjamas and jumpsuits, soft grey suits and cosy fur gilets in blue and bright red.

There were Paisley prints – in black and white on a coat, in muted colours on flowing silk dresses, or on neckscarves worn with simple suits – as well as striped pyjamas.

Stripes were also a feature of Westwood’s Red Label show, where pinstripes adorned skirts, dresses and trousers, matched with a clean white shirt, yet more stripes or a jacket in bright red – a colour that struck a bold chord across the collection.

The designer drew on her archive for this season’s quirky take on aristocratic English style, which used Harris tweed for swaying coats and skirt suits with matching pillbox hats, and black velvet for jodhpurs cut off at the knee.

There were sophisticated outfits worn with pearls and court shoes, but also fur-edged berry hot pants, the imagined wardrobe of a privileged, adventurous woman.

Speaking to AFP backstage before the show, Westwood pointed to the “swagger and volume” of a fitted black tweed coat worn over a frilly shirt.

“This girl is going somewhere. She cares about the world and she wants to find out about the culture of the past, and about the future and to help save the planet,” the designer said.

Westwood is a committed campaigner for action against climate change, and dedicated Sunday’s show to her fight against shale gas exploitation in Britain.

It was a day of classic British brands, including Pringle of Scotland, Margaret Howell and Temperley London, which showcased some beautiful prints in blue, one of the season’s key colors.

But day three of London Fashion Week also saw shows by Unique, the high-end label of British high-street chain Topshop, and one of the young stars of the event, Mary Katrantzou.

Katrantzou made a name for herself with stunning dresses adorned with tromp l’oeil prints of oversized jewellery, but now in her fifth year at London Fashion Week, she is expanding her repertoire.

Staying sexy and feminine with sweeping gowns and short shift dresses, the designer played with texture, overlaying pleats, intricate laces, applique and brocades and a shimmering chain-mail that clinked as the models walked down the runway.

Katrantzou drew on historic and modern symbols for her embellishments, including road signs — a web of No U-turn signs and warning triangles were applied to fragile lace dresses.

“I love prints, and so many people know my work through print, but I felt this season I could diversify,” the designer told AFP backstage, still buzzing after the show.

Creating her famous graphic prints has in the past taken up much of her time, but “this season it felt right for me to free myself up a little” to work on other areas, she said.

Among the models walking at Katrantzou’s show were two older women, who she said reflected a “more complete collection” offering a range of clothes for customers young and old.