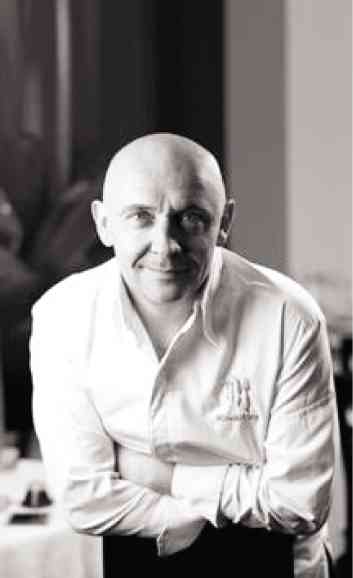 The Tivoli at the Mandarin Oriental Manila will once again host a Michelin-starred chef from Feb. 24 to March 2. This time, Richard Toix of Passions et Gourmandises in France is set to whet the appetites of gourmands and gourmets alike.

The chef—whose restaurant in the charming village of Saint-Benoit received its first Michelin star in 2008, just nine months after it opened—will be working with a combination of imported ingredients and local produce. Unlike other chefs who prefer to work with meat and seafood they are familiar with, Toix is actually preparing to go to one or two local wet markets to see what’s available and then work with what he finds there.

In a Skype interview with Inquirer Lifestyle, he said that, as a rule, he works only with seasonal vegetables. His willingness to experiment with local seafood during his weeklong stint at the Mandarin makes Toix someone to watch.

Guests can look forward to the chef’s take on the Tivoli’s signature three-course Business Lunch menu at P1,950 as well as the six-course Degustation Dinner menu at P3,400 (add P1,800 for wine pairing).

When creating a menu, Toix starts by writing down the recipe and maybe sketching what he wants the dish to look like once it’s plated. This attention to detail has resulted in a collaboration with contemporary Chinese artist Zhou Tiehai at a grand exhibit in 2010, which combined Zhou’s painting with Toix’s traditional French pastries.

Born in Perpignan, a city in southern France, Toix studied in a Lycée Hotelier, getting his first job with the Roux Brothers in London, a restaurant with three Michelin stars, before working in various restaurants across France.

In 1993 he and his wife Laure opened their first restaurant, Le Champ de Foire in Lencloitre, half an hour from Poitiers. In 2007, he launched Passions et Gourmandises, a modern restaurant focusing on fresh seasonal produce.

This is not the chef’s first trip to Asian cities, as he has been to Jakarta, Shanghai and Saigon in the past.

“I really enjoyed myself in Saigon because I discovered many exotic things like different kinds of fish and vegetables,” he said. “I felt like a kid!”

Toix, who celebrated his 50th birthday on Valentine’s Day, has been cooking for the past 36 years. He has never seen it as tedious, because “it’s not work, it’s my passion.”

“Chef Richard’s visit comes close on the heels of the highly successful promotion recently with chef Nicolas Isnard, and we are certain that our diners will be delighted to again savor the sublime flavors of contemporary French gastronomy by a Michelin-starred chef.”