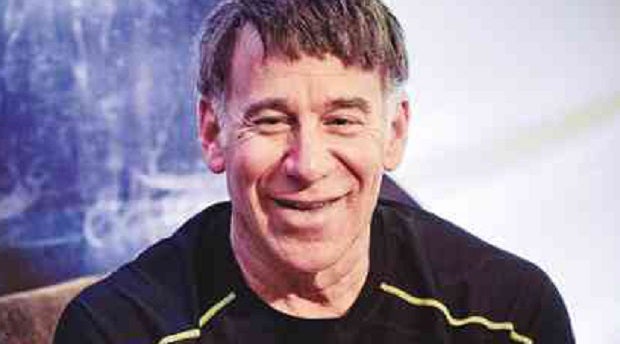 SCHWARTZ is gearing up for a stage adaptation of Disney’s “The Hunchback of Notre Dame,” as well as a film production of “Wicked.”

If you were part of the “Wicked” audience at the evening show of Feb. 2, then you’d be thrilled to know that watching with you was none other than composer-lyricist Stephen Schwartz—the wiz behind the hit musical.

He said he tries to catch the show wherever it’s touring, and described the run here as “virtually exactly the show that’s on Broadway.”

“Our two leads are exceptional, and [so is] the director Karen (Mortimer). It’s especially gratifying that we were able to bring you such a good production [of the show],” said Schwartz.

But Schwartz wasn’t just here in Manila for work—he had also set aside some time to enjoy a “Philippine adventure.” He was able to meet up with longtime friend Lea Salonga, explore Taal Volcano, and enjoy some R&R on an island resort.

“Taal Volcano is really beautiful—and quite a hike, which is good, because I got some aerobic exercise,” said Schwartz.

“I was also glad to take the drive going there and back, to see the surrounding areas,” he added. “There were towns that were starting to plan their fiesta, so there were a lot of wonderful edifices that were being put up.”

Schwartz particularly enjoyed sampling civet coffee, something he said he’s bringing home with him to the States.

He also had dinner with Salonga, her husband Robert and daughter Nicole. Schwartz has known Salonga since her “Mulan” days, when he was involved in the production and composed a song called “Written in Stone.” He eventually bowed out of “Mulan” to work on “Prince of Egypt.”

The two also worked together on a concert that was staged during the inaugural voyage of Disney’s Fantasy Cruise ship.

“We talked about what else we wanted to do—what other cruises we wanted to take,” said Schwartz. “I’ve become very fond of her, her husband, and her wonderful daughter who is turning into quite the young lady. It was good to see them again.”

Schwartz is no stranger to Pinoy talent. He has worked with Filipino-American actors Anna Maria Perez de Tagle and George Salazar on the Broadway revival of “Godspell,” and had nothing but praises for the two.

“Both of them are so talented. George, in particular, is very funny; Anna Maria is such a lovely personality,” said Schwartz.

After his brief Manila visit, Schwartz flew to Los Angeles to continue his work with DreamWorks Animation on a Bollywood-theme animated feature. He is collaborating with fellow composer AR Rahman, who wrote the music for “Slumdog Millionaire.”

There was a collective gasp at the press conference—to which Schwartz responded, “Thank you for that reaction”—when he announced that he is also working on a stage adaptation of Disney’s “The Hunchback of Notre Dame.”

“We had an extremely successful workshop of it in New York, and the first production is going to happen in the fall in a theater in California,” said Schwartz.

And will there be a “Wicked” movie?

It may take a few years, but, yes, there have been talks about it, said Schwartz.