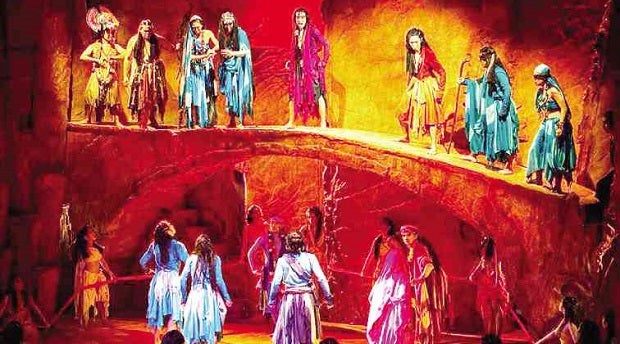 Dulaang UP’s “Ang Nawalang Kapatid” (with remaining performances Saturday and Sunday at Guerrero Theater, UP Diliman) is billed in press announcements as a musical adaptation of the Indian epic “Mahabharata,” the theatrical transposition courtesy of Floy Quintos and the music by Ceejay Javier.

That billing is misleading, or at least thoroughly inadequate. Because, while “Ang Nawalang Kapatid” indeed simulates the form of a musical, with characters telling their stories through song and melodic motifs lending shape and propulsion to the narrative, what director Dexter Santos has created is a production that blends music, movement, text, character, color, drama and design into an astonishing theatrical experience that beggars description as a mere musical.

That is not a knock on Javier’s score, which is one of this production’s strengths—lean and disciplined at only about eight songs (“Lukso ng Dugo” is a standout), the rest piquant instrumentals, done live by a five-piece band. Rather, it is a recognition of the breadth of imaginative firepower Santos has managed to conjure on the cramped Guerrero stage.

Peter Brook had once described the “Mahabharata”—one of the world’s greatest and oldest texts, a Sanskrit poem said to be about 15 times the length of the Bible—as incorporating “diversity, multiplicity, noise, movement, activity, on such a rich and extraordinary scale…”

Brook, of course, is the esteemed British director who brought the “Mahabharata” to the stage in 1985, in a now-legendary 11-hour production that ran from sunset to sunrise at a stone quarry in Avignon, France. (He condensed the play into a five-hour film version in 1989.)

We’re not saying Santos is Brook (that’s not a slur, either—who is, anyway?), but the best compliment one can give his “Ang Nawalang Kapatid” is that, in its fiercest moments, not only does it live up to Brook’s appraisal of the text; it also seems to partake of the mystical, sacral life force at the heart of this most ancient of stories.

Quintos’ Filipino retelling retains the poem’s original framing device—the narrator Vyasa inviting the elephant-headed god Ganesha to record his central story of a primeval kingdom destroyed by a cosmic war between family members, the bloodbath then leading to an Edenic rebirth (in the formulation of Brook’s playwright Jean-Claude Carrière, “le grande poème du monde,” or “the poetical history of mankind”).

But the narrative has been streamlined even further—the five Pandava brothers that make up one side of the clan now reduced to three; their first cousins the Kauravas, originally a hundred brothers, now only one, the firstborn Duryodhana; and Draupadi, the princess shared as wife by all five Pandavas, assigned only to the oldest, Yudisthira.

Out of that stripped-down foundation, Quintos tells the story in plainspoken if melodious Filipino (“Mahabharata—ang dakilang kasaysayan ng sangkatauhan! ‘Yan ang aking itutula, ‘yan ang aking itatala,” promise Vyasa and Ganesha in the beginning). A keen decision, because what Santos has proceeded to do to bring the text to life would have made any attempt at a richer, more poetic language superfluous.

Within the confines of Ohm David’s two-tiered rock-cavern set drenched in the red sandstone tinge of Agra Fort (Gino Gonzales did the costumes, John Batalla the lighting), Santos unpacks from his capacious theatrical arsenal a dazzlingly stylized world of the simplest props and the most vivid gestures evoking a whole universe of men and deities, heroes and legends caught up in all-too-familiar jealousies, betrayals and frailties.

The public shaming of Draupadi in the hands of Duryodhana occasions the magical appearance of a seemingly inexhaustible piece of linen undulating across the stage—only for the cloth to become, moments later, the rope that would imprison the Pandava clan and send them to exile.

In the opening scene, each character is introduced by Vyasa in the form of clay figurines; Ganesha then mashes them all up into a ball of earth, to begin the tale of the conflagration that would grind everything to non-distinction.

Later, to illustrate a skirmish between the cousins, Santos utilizes (if gone too soon) a marching column of backlit cloth panels etched with shadow puppets—in one blow referencing a pan-Asian classical art (wayang kulit in Java, Nang Yai in Thailand, Nang Sbek in Cambodia, ah myinth thabin in Myanmar), and how the immense primordial river of Indian civilization has enriched neighboring tributary cultures.

The most enthralling theatrical flourish—cloth suspended from above, grasped by a writhing woman to denote childbirth—appears to be a paraphrase of a Brook touch. Frank Rich, then the New York Times theater critic, took note of “billowing cloth [that] can represent newborn children…” in his review of Brook’s “Mahabharata” when it played in Brooklyn’s Majestic Theater in 1987.

He also mentioned “the battles of multitudes… conveyed by acrobatic displays of Eastern martial arts, by dozens of white arrows flying through the air, by horizontal ladders spinning violently on a vast stage carpeted with dirt.”

There are no horizontal ladders or volleys of arrows in the local version, but there is physical exertion aplenty, performed by an extraordinarily energetic all-student ensemble. And the stage does end up awash in dirt—as well as blood, sweat, water and heaving bodies—in the all-consuming finale.

Those who’ve seen Santos’ earlier works may recognize his signature touches. A director who honed his chops as a choreographer, Santos once again confirms in “Ang Nawalang Kapatid” his talent for extracting cohesive visuals and emotional expressiveness out of art-directed chaos.

While that bent for loud, relentless staging can be exhausting, it’s an aesthetic that lends itself well to larger-than-life material. His debut directorial work “Orosman at Zafira” in 2008, for instance, was a proto-tribal reimagining of the Balagtas komedya, with similarly warring kingdoms and mythic, outsize characters.

In Santos’ two productions last year, “Collection” and “Maxie The Musical,” the best moments were also those that benefited from his sure touch with grand imagery—the coup de théâtre transition in “Collection” from the contemporary milieu to the pre-Hispanic, for instance; or Maxie’s infatuation with the cop Victor turned into a whimsical fairy-tale number brimming with endearingly outlandish touches (ball-and-ribbon gymnastics routine, anyone?) that simultaneously parodied and embraced the tropes of musical theater.

For this reason, some moments in “Ang Nawalang Kapatid” are bound to look repetitive, even tedious (the cousins’ overlong weapons practice in early Act 2, the crowd processions and mass celebrations), from the standpoint of its director’s earlier works. However, the tumult feels mostly right this time, as an echo of the country and culture “whose defining image is the crowd… superabundant, heterogeneous, many things at once,” as Salman Rushdie put it.

At just under two hours, the show is also surprisingly fleet-footed; the transitions are seamless, the pacing gripping.

As “Ang Nawalang Kapatid” barrels toward its climax, one wonders how Santos would top the thundering mayhem he had devised for “Orosman.”

Here, the Parkour-like routines he had made the cousins go through in a buoyant early musical number (with a yoga headstand even thrown into the mix) would transform into the apocalyptic panorama of the Pandava and Kaurava brothers—now clad only in loincloths, the emblems of their human stations all stripped away—somersaulting, careening, slamming into each other in a fight to the finish on a dirt-strewn, blood-spattered stage, the rest of the ensemble meanwhile also tearing one another to pieces, until, with thunder and lightning, the cataclysmic upheaval freezes into a wasteland of death.

It’s an indelible scene—mesmerizing in its theatricality, horrifying in its truth. We’re tempted to call it Shakespearean, except, of course, the universality depicted is way older than Shakespeare.

British critic Michael Billington, who was there in Avignon in 1985, reported about Brook’s play: “Eleven hours later, with the birds singing in the Provençal dawn, the show finished with a vision of Paradise with sitars playing and candles bobbing gently in the onstage river.”

No birds sing in the haunting denouement of “Ang Nawalang Kapatid.” But as a new dawn begins, the characters journey to the afterlife, and Lord Krishna’s admonition that everything passes finally makes sense, the sense of cathartic communion is complete. One is left simply spellbound.

DUP should thank its gods that it has a corps of impressively agile and tireless actor-dancers (even if they are constantly shortchanged by mikes on the blink, and the grind of multiple shows a week that leaves a number of them with barely-there voices).

For many a show in past seasons, they had filled up ensemble ranks, but young student talents like Vincent Pajara (a commanding Duryodhana—also one of the choreographers along with Santos, Al Bernard Garcia, Jeff Hernandez and Stephen Viñas), Jon Abella (Yudisthira), John Paul Basco (Krishna), Gabo Tolentino (Shakuni) and Ronah Rostata (Kunti) finally get their chance to shine, and they do.

Comparisons are invidious, we know, but it has to be said. The other and way more popular spectacular in town, now playing at the Cultural Center of the Philippines, came to life on the back of a $14-million price tag.

That’s how much it cost to mount the original production of “Wicked” on Broadway in 2003. Add to that the countless workshops, revisions, tryouts—the entire regimen of fine-tuning it went through to become the international juggernaut that it is, now on its 11th year deigning to grace Manila (with top-price tickets at P7,000+).

We do not begrudge “Wicked” its success, because that is also the product of great talent and hard work. The first-rate production in Manila (its electrifying “Defying Gravity” sequence is even better than the one we saw in London three years ago) can teach local theater companies a thing or two about how investing in modern backstage technology—the crucial element of amplification, for instance—and how proper training that can help performers sustain an eight-show workweek without pushing themselves to breaking point, can make theatergoing in these parts an even more engaging experience.

But we must also acknowledge how the presence of a giant inevitably forces a sense of perspective on us—or on anyone, really, willing enough to be clear-eyed about it.

Here is “Ang Nawalang Kapatid,” after all—a production from a campus-theater organization, with an all-student cast (none has alternates), a budget next to nothing, ticket prices at P350 (P160 if you’re a student), a rehearsal period of four months and a run of three weeks, but with the sheer talent to create something breathtaking out of the barest of circumstances on tremendous display (and that holds true for other Filipino productions and theater companies in the same straits).

All things being equal, the scale of achievement arcs higher with the underclassed, don’t you think? Makes you wonder which kind of show truly defies gravity.

“Ang Nawalang Kapatid” has remaining performances on Saturday, 10 a.m. and