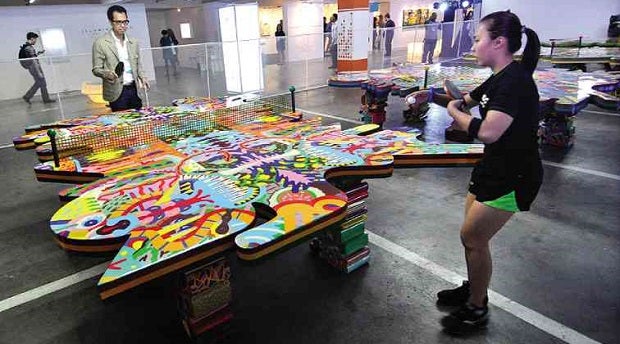 Art lovers have only until Sunday to catch Art Fair Philippines 2014 at The Link beside Makati Shangri-La.

This is the second year that the fair is being held; and gauging by the number of people who added to their art collection during the preview on Feb. 19, it can already be considered a success.

Doors opened at 3 p.m. for the launch of the Swatch VIP Lounge and the unveiling of the artwork that National Artist BenCab made for Swatch. The painting of a beautiful black horse in mid-gallop was punctuated by a swirl and a swipe of red paint on the left and underneath the horse.

The artist told Inquirer Lifestyle that Swatch was expected to launch his design for the Swiss watch group featuring his muse, Sabel, by September.

The fair had been open only for about an hour, but people this writer met said that almost all the pieces for sale had been sold or were already reserved.

Designer Joey Samson was lucky to snag the lone piece young artist and sculptor Alab Pagaringan had created for the fair—a sleeping figure made of twisted copper wires and suspended from the ceiling, surrounded by a flock of origami cranes.

“I had seen his work at the house of a friend and really liked it. At the fair last year, Alab exhibited two pieces but they were both purchased immediately,” Samson said. This time, the designer made sure to secure the piece for his atelier.

Hotelier and Inquirer Lifestyle columnist Melanie Cuevas’ first purchase was a prickly piece by artist Olivia d’Aboville. She was also able to buy another art piece at the Silverlens gallery.

Art Fair Philippines organizer Trickie Lopa told Inquirer Lifestyle that there were three more participating galleries compared to the 25 that joined last year, but that this time, more space was devoted to the fair’s featured designers.

“Those we featured last year included artists Ronald Ventura, Gabby Barredo and Norberto Roldan. This time we are featuring BenCab, Rodel Tapaya, Marina Cruz, Jose John Santos III, Louie Cordero and Pio Abad. The only returning artist this year is Ventura whose installation piece, ‘I wish it was just a dream, but it wasn’t’ is on display on the seventh level.”

Since there were more participants and featured artists this year, the organizers thought it wise to expand the space to include two floors of The Link, floors 6 and 7.

The featured artists were thus given ample space to display their works. Tapaya’s large-scale paintings tackle Asian mythology and include horse-headed characters and human figures locked up in bird cages.

His wife Marina Cruz focused on childhood remnants like party clothes and much-loved toy dolls now with missing limbs, heads and bodies. Her space on the seventh floor featured oversized paintings of doll heads, and tableaux that called to mind abandoned orphanages.

Santos’ fabric bags displayed in rows and arranged on two walls at the reception area look like the lost-and-found section of a school or store. All of the off-white bags appear to be filled with items—there is a heft to each of them—but then no one has come to claim them.

It is Cordero’s “installation” of brightly painted but irregularly shaped ping-pong tables, however, that seems to have caught the attention of many. Not only do the tables occupy the center of the sixth level, but they can actually be used by art fair patrons. That afternoon, pairs indulged in a game or two using the neon-colored paddles and ping-pong balls provided.

At the Archivo 1984 gallery, over a dozen paintings by the reclusive artist Jaime de Guzman are on display. De Guzman is credited for introducing “the distortion of the human figure as a projection of the harsh and pained contemporary reality,” one reads in notes provided by the gallery.

The artist, who now lives in Candelaria, Quezon, made a rare appearance on Wednesday and gamely posed for photographs beside his self-portrait.

A huge floral installation piece by artist RM de Leon made of galvanized iron and acrylic was too big to display at Archivo, so the gallery owners decided to set it up at the parking lot, believing it would express a stronger message about contemporary art.

The rock star of Art Fair Philippines 2014, however, is BenCab. During the preview, people sidled up to him, requesting to have their picture taken, and not once did he decline. A display of his newer works on the seventh floor includes several pieces on painted and perforated metal, as well as sculptures mounted on pedestals.

Need more proof of his iconic status? “Monsoon Season,” an earlier painting exhibited at another gallery, was quickly snapped up during the preview for the princely sum of P1.1 million.