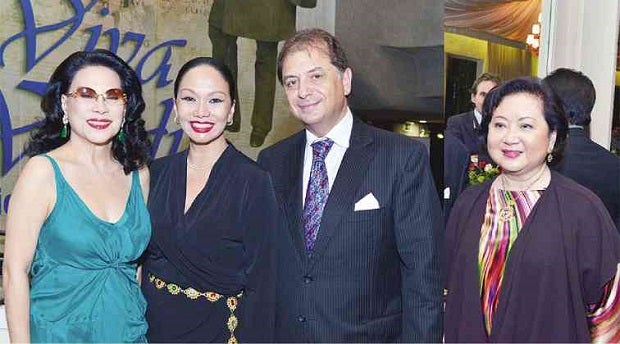 The Embassy of the Republic of Italy, Philippine Italian Association, Rustan’s and Cultural Center of the  Philippines staged an awesome opera showcase honoring the 200th birth anniversary of the great Romantic opera composer Giuseppe Verdi at the CCP Tanghalang Nicanor Abelardo.

“Viva Verdi 1813-2013  Bicentennial Gala Concert” was both  an exhibit and a performance.

Tomasino, most of them alumni and faculty of the Conservatory of Music of the University of Santo Tomas. Dance numbers were rendered by Ballet Philippines.

Jaime del Mundo played narrator and provided the plots of the operas so as to guide the audience on the excerpts.

Before the concert, images of the devastation wrought by Supertyphoon “Yolanda”/“Haiyan” were projected onstage, arousing “great emotion,” as confessed later by Ambassador Massimo Roscigno. The concert, in fact, said the envoy, sought “to provide moral support at a time of great sorrow.”

Roscigno said part of the proceeds from the concert would be donated to the typhoon victims.

Makati Shangri-La unveiled its newest dining destination, Sage Restaurant and Bar, in what used to be the iconic Red Restaurant.

VIP guests enjoyed endlessly flowing chilled champagne in flutes, natch! The service staff made sure that everyone had a proper drink in hand at all times, palanggas.

As we entered Sage from the Tapas Bar entrance, we first noticed a wall of teal chevron inspired by the inner lining of a suit. A floor-to-ceiling Enomatic machine is installed on the left side from the bar entrance, and across it, metal rows consisting of leather strips to connote belt buckles.

The central bar and marbled floor are made from England onyx, and plush chairs at both the bar and restaurant are locally custom-made and hand-sewn from leather, suede, velvet and tweed, and the wooden flooring is patterned after a herringbone design. Wall panels have a pinstripe pattern.

More surprises awaited the guests. They were led to a winding staircase leading to the eye-catching restaurant on the second level, with an intimate setting for modern European fare and an awesome wine cellar for all vino lovers.

Later, Borgers introduced the new kid in town, Sage’s chef de cuisine Gilles Galli,  from Grasse in Southern France, where you find endless fields of lavender flower, dahlings. He has previously worked for Michelin-star restaurants, including the très prestigious Michel Rostang in Paris.

The Chillittes band provided entertainment. Then the popular Zombettes spinning duo Ornussa Cadness and Sanya Smith took over with DJ Marshall White, and they made sure the guests were rocking the floor before they staggered out for home.

Leave it to Shangri-La group to come out always with the best of the best, n’est ces pas, dahlings?