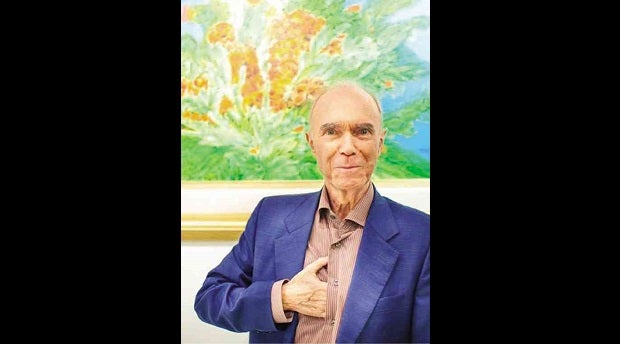 We were extremely excited when we found out that Juvenal Sansó was coming to Cebu. We’ve heard so much about the world-renowned, multiawarded living art legend—that it seemed as surreal as his bright, dreamlike landscapes that he would actually hold an exhibit of his personal collection at Qube Gallery’s first anniversary and grace the affair.

The 84-year old master artist-intellectual delighted us with his “Rare and Essential” collection—a body of work done in Paris in the 1980s and early 1990s that depicts lush green landscapes, summer water and beach scenes, and flowers in a vase.

But what truly made an impression was how he regaled us and his fans with stories of his childhood as well as his enthusiasm in posing for the camera.

Dedicated Instagramers couldn’t help but take turns getting their photos taken with the twinkly-eyed octogenarian, who was jovially making faces at the camera, saying “Sex!” before each camera click, and essentially showing off the playful kid in him.

Born in 1929 in Catalonia, Spain—home to many great artists, including surrealists Salvador Dalí and Joan Miró—Sansó moved to Manila with his family when he was 4 years old. His father, a sculptor, established a decorative wrought-iron business called Arte Español, which for a time, was the biggest wrought-iron and steel furniture manufacturing company in the country.

He had hoped that his son would someday take over the design aspect of the family business, so he encouraged him to get into the arts. But Sansó eventually fell too deeply in love with painting.

Influenced by masters such as Fernando Amorsolo, Ireneo Miranda and Dominador Castañeda at the University of the Philippines’ College of Fine Arts, his early works started winning award after award.

He eventually moved to Paris to further hone his craft. Sansó held his first one-man show there before traveling extensively to hold solo exhibitions in Manila, Italy, US,  UK  and

He may have won innumerable awards and heaps of praise throughout the world, but, apparently, what this man cherishes the most are the three awards given to him by three countries that he had called home: The Presidential Medal of Merit, awarded by President Gloria Macapagal Arroyo in 2006; The Distinguished Cross of Isabela given by the Spanish King Juan Carlos in 2007, which is akin to a knighthood given by the Queen of England; and The Chevalier de l’Ordre des Arts et des Lettres, which was conferred by the French Ministry of Culture and Communications in 2008.

It wasn’t all peaches and cream for Sansó, however. He was in his early teens when World War II started, and his family had to shutter their business temporarily and set up a horse-drawn buggy transportation service, where the young Sansó worked as a dispatcher and conductor.

He suffered a great deal during the war, and became deaf in one ear when a bomb exploded a few feet away from him during an air raid.

There was no trace of anguish in the Sansó we got to met, however. In fact, the artist radiated nothing but an infectious joviality, a great sense of humor and a playful charm.

Sharing his great mood were Galerie Joaquin’s managing director Jack Teotico, who has been representing Sansó for almost 30 years, and Qube Gallery’s Jon Gotiong and Maris Holopainen, who were simply overwhelmed not only with the turnout of art afficionados at the gallery but also at the number of paintings that guests were snapping up, including key tempera paintings from the artist’s circa-1960s “Fundamental” collection.

It’s great news for Sansó, who has finally decided to exhibit his personal collection to raise funds for a museum he wants to build for his foundation. The foundation, he said, is where he will leave everything he owns.

His legacy isn’t only that of a great artist. For the people who know him well or who have had the luck to meet him, he is, above all, a great man.