She lost herself in the slums of Africa to find God | Lifestyle.INQ ❮ ❯ 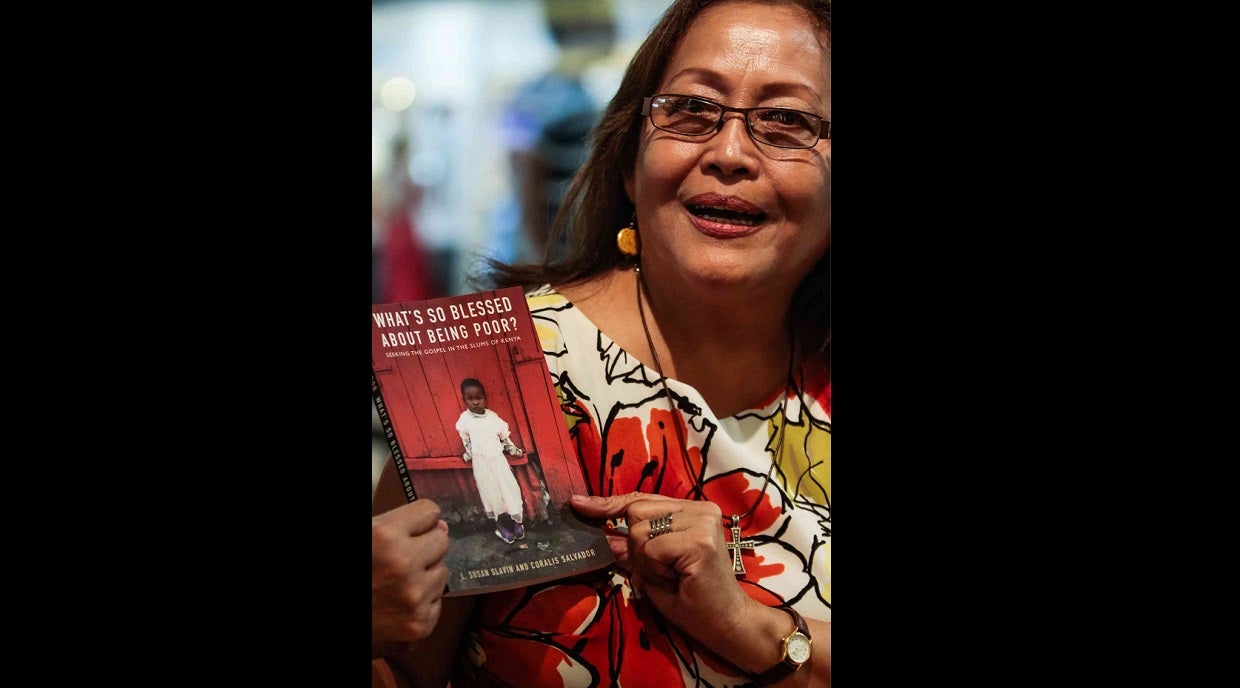 HER STORY. Salvador with the book she co-authored on working as a missioner, “What’s So Blessed About Being Poor?” LEO M. SABANGAN II

She lost herself in the slums of Africa to find God

This is the story of a woman who brought her five children to America, flew to Kenya when they grew up, lost her “self” in Africa and found God.

Coralis Obligacion Salvador also did other things, like work as an office manager of an investment banking firm in San Francisco, and become a grandmother of four.

And while most other people feel the Lord’s presence within their families, Salvador’s apparent restlessness led to her ongoing work as a missionary in Kenya helping AIDS orphans and epileptics.

She is currently the administrator of the Kikambala Catholic Dispensary and the Kanamai Health Center and Epilepsy Clinic under the Catholic Archdiocese of Mombasa.

From 2001 to 2010, Salvador was a hands-on social worker who established the AIDS Orphans’ Project, providing healthcare and education to children of AIDS victims.

She is also involved in creating awareness on the plight of deaf children, and in building the first secondary school for the deaf in the Coast of Mombasa.

Salvador is on a short visit to attend the Golden Jubilee homecoming of St. Paul’s College, Manila, before she goes back to Mombasa, where her fourth contract as a Maryknoller lay missionary ends in August.

In a chat, Salvador showed Inquirer Lifestyle a copy of a book, “What’s So Blessed About Being Poor? (Seeking the Gospel in the Slums of Kenya),” that she co-authored with New York-based lawyer-litigator L. Susan Slavin, also a missionary like her.

The book documents the two women’s experiences working in the slums of Kenya, and how they found God amid the squalor.

Becoming a missionary was not in Salvador’s plan while growing up.

In an earlier interview aired over Radyo Inquirer, she talked about life in a middle-class Catholic household and taking up Foreign Service in college while being exposed to other philosophies, great thinkers and religions.

“Practicing my religion was not my priority; I was the ‘cafeteria-type’ Catholic. I got caught up with the question ‘What now?’ after college. After a couple of years being employed, I felt there should be more to life than work; I then decided to get married, with the hope of finding fulfillment in it,” she recalled.

She went on a pilgrimage to Spain in 1987 and was touched by stories about St. Teresa of Avila, one of the great doctors of the Catholic Church.

St. Teresa’s spiritual journey inspired Salvador to read about the life of the saint, and eventually, to discover spirituality.

Salvador eventually left for California with her five children. While nurturing a new career in San Francisco, the realization that the children would eventually grow up, fly the coop and leave her made her think of “other options” that would finally fulfill her “selfish” motive of being closer to God.

She first thought of joining a religious order for men and women who are divorced or widowed.

The parish priest in St. Cecilia’s Church, however, thought her idea “was not a good fit” and urged her instead to join the Maryknoller lay missioners.

Salvador underwent a rigorous orientation at the Headquarters of St. Maryknoll in New York from August to December 2000. She was sent to Kenya a month later, only to discover that no amount of prepping could have prepared her for what she saw in Nairobi.

There were one-room hovels for families with numerous children, with nothing but muddy ground as the floor.

She talked of soot and smoke from clay pots lighted inside as families prepared their meals, and of having to see only the eyes and teeth through the smile of a woman dying from AIDS, because her hovel was so dark.

“It’s nothing compared to what I’ve seen in Manila, where the poor still have their TV, their electric fans and other conveniences. It was so bad, and my heart was just so broken. I was overwhelmed, I was literally in tears and I wanted to go home.  The sense was, ‘There is nothing I can do here,’” she said.

Salvador remembered the onslaught of guilt (“all the facilities, luxuries and food, and you waste so much while living in the States”) and reminded herself of her main objective of becoming closer to God.

Meanwhile, her superiors wasted no time in sending Salvador to school to learn Swahili.

Within six months, she was given the AIDS Orphans’ Project, received further training as a social worker and used the administrative skills learned in San Francisco to oversee five areas manned with scores of volunteers, counselors and other social workers.

For the next 10 years, Salvador was also tasked to seek grants and write the regular newsletter that reports all that is happening on the ground.

And then, more work ahead. Salvador apparently pleased the Maryknollers, such that she was sent to an epilepsy clinic along the South Coast to observe and receive training from the Kenya Association for the Welfare of Epilepsy.

If AIDS victims and orphans are crippled by social stigma, Salvador observed that persons with epilepsy are dealt a worse hand.

The mix of superstition and ignorance made epilepsy a cause of family shame in most of Kenya.

Salvador said that when epileptic children and adults would collapse during church service, the people would immediately suspect demonic possession.

“Parents hide their children or leave them in the forest to die. The condition is seen as a punishment; the family did something wrong and they are cursed,” she said.

Salvador added that even the Kenyan registry of health apparently does not formally recognize epilepsy as a health condition.

Anyone admitted to the hospital would have to check the box marked “others” before a doctor sees him/her.

“Myth is always the answer to anything that has not been factualized. We had to have a lot of meetings with the community to educate them, make them understand epilepsy is a brain condition. It’s a surge of energy that doesn’t know where to go so the person ends up falling…” she trailed off.

Salvador said the Kenyan environment is unique, as malaria is more prevalent. In many cases, the effects of a high fever suffered during a bout with malaria can be seen years later.

“Epilepsy would show at a later stage, a side effect that comes after three, five years. So when a small child becomes six or seven, that’s when the condition manifests itself,” she explained.

The woman who went to Kenya for selfish reasons eventually realized that finding God meant losing the “self,” as it is known in Western society.

“Whatever I was doing in San Francisco was not enough. There was that hunger that cannot be addressed. After doing service to the poor and marginalized, I found that the hunger could only be satisfied through service,” she said.

But why find God in Kenya when Manila also has slums?

Salvador said it was a decision made for her by the mission. Besides, Africa was a challenge because seldom is it listed as a first choice by anyone who wants to become a missionary.

The task itself of finding God remains a work in progress.

“You have to be grounded in your prayers, you have to have a practice of prayer, of going to Mass everyday or meditation or whatever gets you grounded and takes you away from yourself,” she noted.

Salvador said the constant awareness of oneself bars one from performing true service.

“You have to die to yourself, what you want, what you expect, what you hope for.  Coming from a Western culture, there is a tendency to have a checklist. You’re proud of doing 10 things today. But in Kenya, there is no checklist. You can’t write down what you did,” Salvador said.

Being with a sick person for one whole day, for example, may just be one item on a person’s mental checklist.

“But your presence is an affirmation that someone cares for that person. That you made his day, and it also makes your day, so it’s never one way,” she added.

“It is difficult; it took me 13 years to reach where I am spiritually. I guess others could go faster. To each his own pace,” Salvador pointed out.

When her third three-year contract with Maryknoll ended in 2010, Salvador took a yearlong sabbatical and flew back to America to reconnect with her children, her mother who was still alive then, and other relatives.

She observed that, as she told the story of her spiritual journey, there are those polite enough to listen, but just “not interested, since they are so involved in their own lives.”

She realized that to encounter God’s presence, one must be open to a relationship with others—a task that is actually harder to achieve in modern cultures.

“That is how the poor are blessed. The Kingdom of God is theirs because they are open. I miss that. I renewed my contract and went back in 2011,” Salvador said.

The missionary’s mother died just before she was about to fly back to Kenya. She still went back to Africa, confident that God’s will, and not hers, must prevail.

The homecoming provided some respite and allowed Salvador some soul-searching, and a declaration that, this time, she is indeed “in the arms of my Lord.”

“I don’t have to wait until after death, it’s here and now. God has shown me unconditional love, and I’m in a joyful place. It’s beyond imagination but just a touch of God, a glimpse. You don’t have to wait to die. You die to yourself right now and give yourself totally in the moment,” Salvador said.