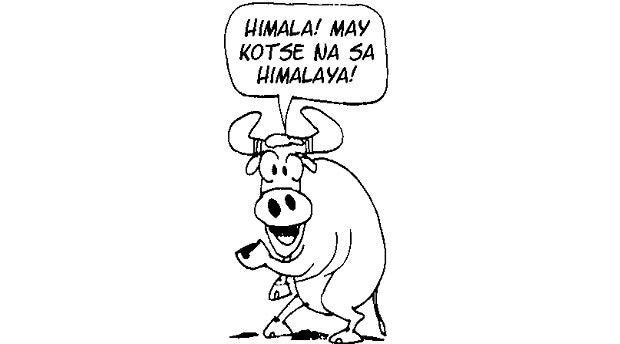 Bhutan: Shangri-La gives in to technology THIMPU, Bhutan—It was the world’s last holdout against television and is regarded by travelers as a Himalayan Shangri-La.

But Bhutan’s decision to make itself the poster boy for electric transport is further proof of its willingness to embrace technology as part of its unique Gross National Happiness development model, says its prime minister.

In an interview with Agence France-Presse after signing a deal with Nissan on Friday to import a fleet of battery-powered compact cars to the remote Himalayan nation, Tshering Tobgay said Bhutan was happy to be at the technological vanguard.

“Technology is not destructive. It’s good and can contribute to prosperity for Bhutan,” the prime minister said.

It was not always thus. The tiny kingdom was famously the last country to ever get television, finally embracing it in 1999, at a time when less than a quarter of households had electricity.

But it is rapidly shedding its reputation as a technophobe—it now exports electricity thanks to an ambitious hydropower program, while smartphones are a common sight, at least on the streets of the sleepy capital Thimpu.

“Internet, cellular phones, smartphones, they are ubiquitous, you can’t do anything without them, now they are essential tools,” said Tobgay.

“Cellular phones became a reality 10 years ago. We adopted it very well, almost everybody has a cellular phone, that’s the reality.

“Similarly today we launched the Nissan Leaf … Our goal is to make the best of all options,” he added.

Under the deal with Nissan, dozens of battery-powered Leafs should soon be motoring along the streets of Thimpu, helping it avoid the kind of pollution pervasive elsewhere in South Asia.

“Growth is important but it should be balanced with other aspects of life including culture, spirituality, heritage and sustainable development,” said the prime minister.

“During the development of the last 30-40 years, we placed a lot of emphasis to promote the environment, clean industries.

“We are looking to become 100-percent organic, (although) it will take some time. And we are looking to develop a zero-emission goal. This formulates a narrative of Bhutan, about what Bhutan is about and where Bhutan wants to go.”

Tobgay, who came to power last July after winning Bhutan’s second elections, has previously voiced a degree of skepticism about GNP—a philosophy originally espoused by a former king—as a distraction from tackling the country’s problems.

But in his interview, the prime minister said addressing issues such as corruption, unemployment and the environment would allow Bhutan to practice what it preaches.

“GNH should guide us, this philosophy should not be compromised,” he said.

“But my stance has been that rather than talking about the GNH and debate the philosophy, we have to operationalize it.” With a population of just 750,000, Bhutan is in many ways a study in contrasts with its giant neighbors India and China, with their billion-plus populations and mega-cities.

Despite its stunning scenery, few tourists can afford to pay the $250 daily rate to visit the “Land of the Thunder Dragon.” But its abundant waterfalls and crystal-clear rivers have allowed Bhutan to become a significant player in the hydropower sector.

Bhutan now operates four hydroelectric plants which between them have almost 1,500 megawatt capacity—at peak output roughly equivalent to a large nuclear power station—and the surplus is sold onto India.

Tobgay said Bhutan would struggle to meet its capacity target of 10,000 megawatts by 2020 through the building of 10 new plants.

But he said there should be no doubting Bhutan’s commitment to a zero-emission target which would involve other renewable energies.

“We are looking also at solar panels, windmills, biogas,” he said.

“The important point is to make progress toward achieving our goal which is to harvest renewable energy and to use that renewable energy to power our own country and to power the energy needs of our neighbors with clean energy.”   AFP

Bhutan royal wedding: We saw the colors of the rainbow