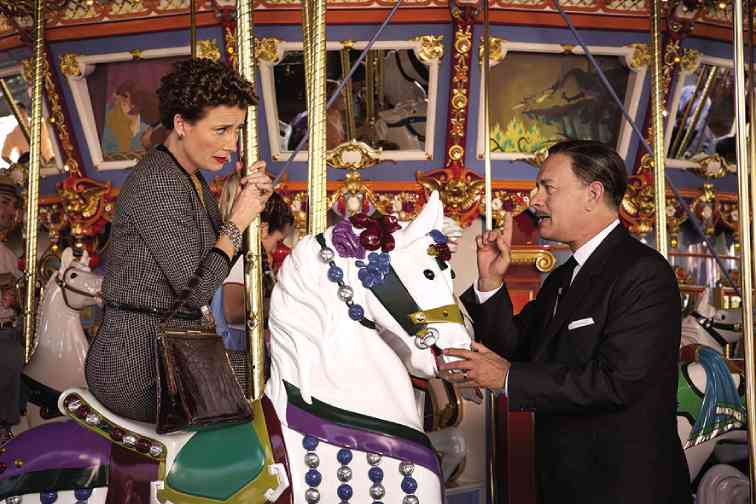 It is an unlikely clash: the charming Walt Disney with the curmudgeon author of the well-loved children’s classic “Mary Poppins.” But it makes for a gripping tale.

In 1961,  Disney invited  P.L. Travers to his studio in Los Angeles to discuss, in person, his continued interest in obtaining the movie rights to her beloved book and character—a pitch he first made to her in the 1940s.

Still hesitant and disinterested after all those years, Travers wanted to tell the Hollywood impresario to go fly a kite, but with dwindling sales of her books and a bleak economic future looming,  Travers said yes and embarked on a two-week sojourn in Los Angeles that would ultimately set the wheels of the beloved movie in motion.

“Mary Poppins’” journey to the screen begins the moment Disney’s daughters beg him to make a movie of their favorite book. He makes them a promise,  but it is a promise he doesn’t realize will take 20 years to keep.

In his quest to obtain the rights, Walt comes up against an uncompromising writer who has absolutely no intention of letting her magical nanny get mauled by the Hollywood machine. But, as the books stop selling and money grows short, Travers reluctantly agrees to go to Los Angeles to hear Disney’s plans for the adaptation.

For those two short weeks in 1961, Disney pulls out all the stops. Armed with imaginative storyboards and chirpy songs from the talented Sherman brothers, Walt launches an all-out onslaught on  Travers, but the prickly author doesn’t budge. Soon  he begins to watch helplessly as Travers becomes increasingly immovable and the rights begin to move further away from his grasp.

It is only when he reaches into his own childhood that Walt discovers the truth about the ghosts that haunt her, and together they set Mary Poppins free to ultimately make one of the most endearing films in cinematic history.

Expounding on the premise of the film, director John Lee Hancock says: “It’s really a fantastic story, but it’s not the behind-the-scenes look at the making of  ‘Mary Poppins.’ You’re not on a soundstage with a young Julie Andrews and Dick Van Dyke. Our story takes you back two to three years before the actual production of the movie began.

“Walt Disney saw the promise of that movie, which made it worth dealing with P.L. Travers to secure the rights. That’s our story, a fantastic story, about a beloved movie, its own story and characters, and the origins of how it became this amazing, groundbreaking film.

“On a deeper level, it’s also about two storytellers and Disney’s journey trying to discover why P.L. Travers holds on so dearly and protectively to her story and the image of this father she adored.”

Emma Thompson says of  Travers: “She was a wonderful case study, requiring so many different shades. She’s one of the most complicated people I’ve ever encountered.

“I’ve never played anyone more full of contradictions, which makes it fascinating, because she oscillates all the time. Her early life interfered so radically and so successfully with her capacity to have relationships, particularly her relationships with men. Her father had been so emotionally unstable and unreliable that, for her, love was always a very tricky thing. There was a brokenness and an emptiness and a sadness in her.”

The movie is directed by John Lee Hancock (“The Blind Side,” “The Rookie”) from a screenplay written by Kelly Marcel (creator of FOX-TV’s “Terra Nova”) and Sue Smith (“Brides of Christ,” “Bastard Boys”).