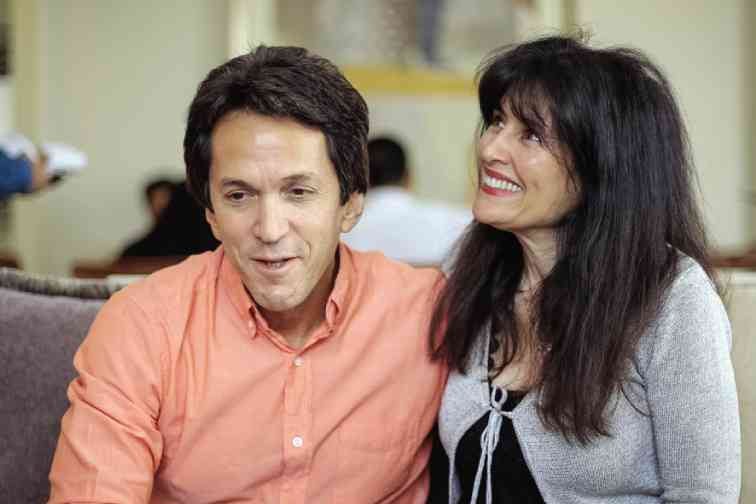 This bright morning, Mitch Albom will emerge from the cool shadows of an airplane and finally get a glimpse of what he came here to see—the ruined city of Tacloban in Leyte. And he has come not to sign books or sell them—he’s come to give them away.

After being mobbed at signings in Manila and Cebu, Albom has come here with his wife Janine ready to help. He braces himself for what he might see, especially after what he witnessed when he went to Haiti to help after the earthquake in 2010.

Helping is the whole reason the 55-year-old Albom is in the Philippines. He says that he’s been asked to come to the Philippines every year since 2003.

“I’ve always said no just because it’s very far away and not an easy place to get to,” Albom explains.

But when his new book, “The First Phone Call from Heaven,” was about to be released, he was asked by National Book Store to come to the country again—then Super Typhoon “Yolanda” struck hard.

“Maybe this is a sign that I should go because then maybe I could use my notoriety—people tell me I’m popular there—to bring some attention to the situation and help rebuild,” he says.

He noted that the trip would be in February, four months later. “By that time, the story’s faded a bit and I can help,” Albom says, explaining that he made that wish part of the trip and National readily agreed.

So today, he will donate 40 fishing boats he has bought to the relief effort. He will visit Pawing Elementary School in Tacloban to help open the library there—as well as nine other libraries with the help of the National Book Store Foundation.

“I’m donating several hundred of my books to seed them,” he says, adding he has asked other American writers to give 10 books each to the libraries.

“Everyone has said yes so far,” he notes. “Stephen King, Amy Tan and Scott Turow. Ten of them have already signed up. We’re gonna try to get John Grisham and James Patterson, Khaled Housseini. I know all these guys, some of them are close friends, some of them I know a little bit. I think us American authors should show support for young readers here.”

He’s trying to help out in the long term in his own way. He’s had experience working after the Haiti earthquake. “So what I’ve done in Haiti is take over one orphanage, one little place, 40 or so kids. That’s my little corner. So if everybody does their little corner, they can help out.”

Albom wants to find his corner in Tacloban, and if it bears fruit, then he sees no reason why he wouldn’t come back and help it grow. “Hopefully, we’ll work with the Red Cross to set up a second fund for this part of it. If I can establish something that’s ongoing, then I’ll come back.”

His visit to the Philippines is only the latest stop in his unusual, extraordinary journey.

Weaned on sports books and comic books (his favorite is the brooding, philosophical Silver Surfer), Mitchell David “Mitch” Albom first gained popularity as a much-awarded sportswriter—then a little book called “Tuesdays with Morrie” happened. Featuring conversations with his former professor Morrie Schwartz, Albom’s book eventually sold millions of copies and begat a TV movie and a play, leading him to become a novelist. He has never grown tired of talking about how much that book means to him.

It certainly wasn’t expected. “I was a sportswriter and planned on staying a sportswriter for pretty much my whole career. ‘Tuesdays with Morrie’ only happened because I was trying to pay Morrie’s medical bills and the only way to raise any money was if we got a book deal. It would be a one-time diversion and no one would read it. Everything that’s happened since then has been an accident.”

He thought only older people approaching their mortality would appreciate the book, but is surprised by the realization that now more young people are reading it.

Since then, Albom has written a series of reader-friendly novels that have been inspiring reflections on the afterlife and the lives we live. He explains that the roots of these novels can all be found in “Tuesdays with Morrie,” because people kept asking him where he thought the late Schwartz would be now, leading him to ponder what lies beyond.

“I’m more a believer than a skeptic, although I think doubt is healthy,” he says. “I don’t blindly take what anybody says and take it as true. I ask questions. But I’ve come to the conclusion that there is something bigger than us here.”

His first novel, “The Five People You Meet in Heaven,” focused on a World War II vet named Eddie who served in the Philippines and accidentally killed a girl named Tala.

That little Philippine reference came because Albom actually had an Uncle Eddie who was here during the war. He lucked on the name Tala (he did not know at the time it meant “star”) when he was searching for a name for the girl. “That was God watching over that because it sounded right.”

Albom has since written three more novels and another nonfiction book. His books have sold over 35 million copies in 44 languages.

“Just like John Grisham always has a lawyer in his book,” he says, “I always have a theme of life’s lessons. But I try to do it in an entertaining fashion. I’m not a how-to author. I’m telling stories.”

Albom is always conscious of his broad audience, working to be easily accessible by keeping it simple, and so there are no curse words and no sex scenes. “The worst word you’ll find in my books is ‘damn!’”

“The First Phone Call from Heaven” is his most ambitious so far. It is set in the small town of Coldwater, Michigan, where for some unknown reason people begin receiving phone calls from departed loved ones.

“As you get older, you become more sophisticated,” he says. “It’s a much longer book than any other book I’ve written before, by about 100 pages. The characters are more developed. The suspense is much greater. Really, it’s a mystery thriller almost right up to the very end.”

He also describes the book as being written like a movie—and true enough, talks are ongoing for a possible screen adaptation. Four of his books have already been adapted for the screen.

Albom is already hard at work on his next, as yet untitled, novel, due out in 2015.  “It’s going to be a novel about a musician. The book that’s going to span his whole life and all the bands he was in at different times and how he affected them. He has a guitar that’s sort of magical. The book takes place at his funeral. It’s a parallel for what we do in our own lives.”

This is close to his heart because music is his true love.

“I’m probably a better musician in terms of natural skill than I am a writer. Music comes to me very easily and naturally,” he says.

He had really wanted to be a professional musician but was much more successful as a writer. He plays the piano and likes listening to all kinds of music. He has 23,300 songs on his iPod. “And I know every single one of them.”

Ironically he can’t listen to music when he’s writing because, he says, “my brain immediately goes to the music and I start listening.”

He writes a couple of hours without distraction (no TV, no Internet) everyday after a cup of coffee and a shared prayer with Janine. (He is Jewish, she is Christian.) “We share and celebrate our faith,” he says.

He keeps notes for possible books. “A couple of years ago, I realized even if I lived to be 85 I don’t have the time to write each one of these books if they took me two or three years. So I’ve decided to write more frequently and stop doing other things to make room.”

He already has two books due out in 2016. In the works are a nonfiction tome about Haiti and his first trilogy.

“I’m the only author whose every book is a brand-new book. I’ve always wanted to do that,” he says. “It would be fun to have the same character come back and continue the story.”

He adds:  “I’m going to try be a little bit more productive because you don’t know how long you’re going to live.”

In his spare time, aside from spending time with his family, Albom likes listening to music, playing basketball and pinball, and working on his many charities in Michigan and Haiti—and maybe soon Tacloban.

Albom knows he is fortunate to be making a living through his art. He makes sure he does not take anything for granted. He’s amazed by every moment of the journey. “I think it’s good to be astonished everyday.” That’s why he’s here, too.

When you prod him about his inspiring example, he demurs.

“I’m not sure I consider myself an inspiring person,” says Albom. “I think that I meet a lot of people who are inspiring and that I write about characters who are inspiring. Myself, I’m always surprised when anyone finds me inspiring.  But I always hope my stories leave people inspired.”