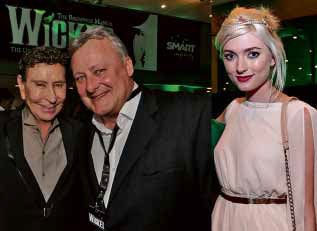 Dear palangga readers, friends and followers, I must warn you that impostors are using me through Facebook, Twitter and Instagram. I have no such accounts at all.

My friend Pepper Teehankee deleted the impostor-accounts and advised his friends to be on the lookout for criminal accounts using my name.

Nor am I an endorser of any brand, except of course Belo Clinic and products, Svenson, Moet et Chandon & Hennessey, and Cinderella.

The gala opening of the Manila tour of the Broadway musical hit “Wicked” was said to have surpassed the glamour of even Broadway and the West End.

We saw the CCP “greenified” and transformed into the “Emerald City” as Manille’s leading theater and society figures dressed in fab costumes depicting their favorite characters from the show.

I have already written about “Wicked,” but what I must add now is that the two  leading ladies, Jemma Rix and Suzie Mathers, are impeccable and outstanding. The music, set and costume designs, and the cast are all magnificent—words cannot further describe how enjoyable the show is.

The songs are electric, the dance numbers flawless, the projections spectacular, and the stage filled with technical wizardry. My senses were extremely satisfied when I saw it, dahlings.

“Defying Gravity” was one number that moi was looking forward again because I knew that this is the point where Elphaba literally flies and belts out such intense notes that you’d be holding on to your seat the whole time.

Meanwhile, the song “For Good” cast its spell on the audience and everybody was in total silence as the two women sang their final song together as friends.

After the finale, the audience gave the cast a standing ovation.

It’s no surprise, palangga, that producers have extended “Wicked” till March 9.

“We are thrilled that the audiences here have taken ‘Wicked’ to their hearts as audiences have done around the world,” said James Cundall of Lunchbox Theatrical Productions.

He added: “We have managed to squeeze in 16 more shows prior to its Melbourne season, with no further extensions being possible. So this really is your last chance to buy tickets for this sensational show!”

The production is directed by Joe Mantello with musical staging by Wayne Cilento. The Philippine season of “Wicked” was produced by Marc Platt, David Stone, Universal Pictures, The Araca Group, Jon B. Platt and John Frost. It is presented by Lunchbox Theatrical Productions, David Atkins Enterprises, 105.9 Radio High, and Concertus Manila.

Converse unveiled its spring-summer collection at the Converse Trade Hall in Orient Square along Emerald Avenue in Pasig City, palangga.

Also presented during the event were the sneaker collections of Converse’s sub-brands such as Chuck Taylor All-Star, Cons and Jack Purcell.

“Our Spring of 2014 is, quite literally, all about splashes of colors,” said Oliva. “Our designers explored the whole spectrum of colors available to the human mind and craftsmanship. Especially since spring is the time when nature unfolds its colors gloriously.”

Oliva added that the “explosion of colors reflect the excitement and the mood for new adventures and possibilities.”