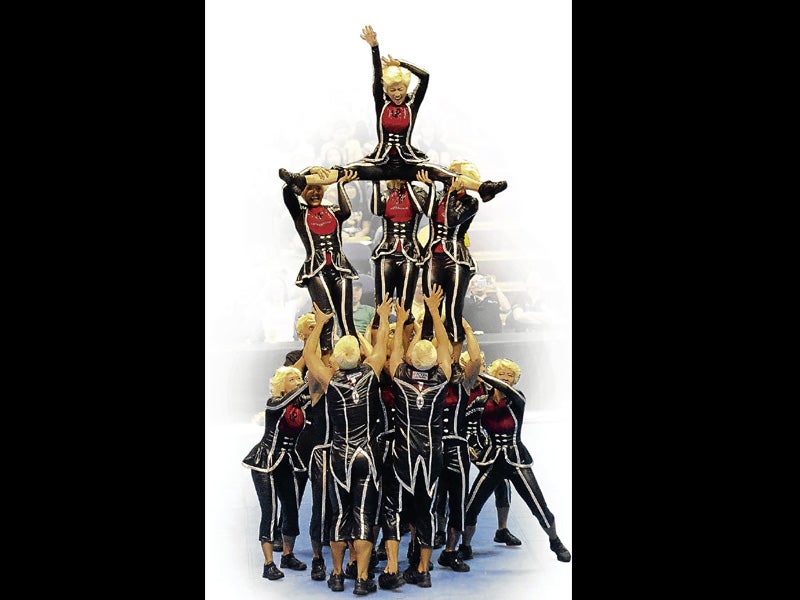 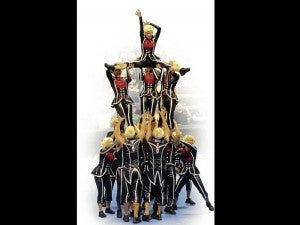 Blondes do have more fun.

UP Pep Squad looked indistinguishable from one another as they all sported the same hair ‘do and the same uniform. They channeled pop icon Madonna and they were blessed with their seventh UAAP title; their first group stunt category award; while their dancer Nesza Salvador was named as the Samsung stunner awardee. They started their routine with a bang, with a partner stunt lift. They nailed the routine to perfection. They were larger than life, as they made use of all available areas of the mats to their advantage. After a series of basket tosses and a pyramid, they pulled out their golden pompoms from their sleeves.  The effect was nothing short of magical, it seemed to appear out of nowhere. With their win, the squad qualified for the 6th World Cheerleading Championships in Hong Kong later this year.

The De La Salle Animo Squad clinched the second spot with an Archer-themed routine.  This was the squad’s first entry into the top three, after they changed their name to “Animo” from “Pep” right after their ’07 routine. “It feels so good!  This is what La Salle wants—to redeem ourselves from the 2007 routine. The expectation to do well is high because we just won the FilOil-(Flying V Cheerleading Competition) last summer,” said head cheerleader Paolo Ian Lucero. Lucero refers to the year their team interchanged the boards that spelled out their school name.  That squad was disbanded to form a new team.  Their redemption came this year, with their fly-over toss and precise execution of stunts. But it is the members’ sheer determination that left the audience in awe.  When one of the flyers wobbled at the beginning of a lift, she kept her composure and managed to complete a scorpion. Another flyer, Aiana Lontok, became the poster 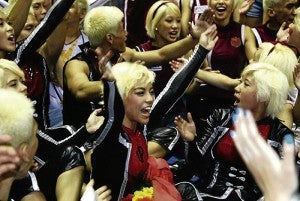 girl of what cheerleading is all about after she continued with the routine, despite the broken arm she incurred halfway through the routine.  Coach Alessandro Garde said that they didn’t even notice anything wrong until after they finished their routine and found her slumped on the dug-out floor, crying. “That’s why they didn’t get to complete one pyramid.  She was already hurting at the time,” he says.

For more on that story, visit http://sports.inquirer.net/.

The FEU Cheering Squad’s Bollywood routine fell short of expectations as they landed on third place. They were faithful to the Indian hand gestures. Their transitions and tosses showed that they, arguably, have the most athletic and talented dancers in the league. However, the risks they took to do complicated stunts took their toll on the team.  A variation of their trademark heel stretch wobbled as three flyers were unable to complete it and committed a few errors after. The jar props that the dancers carried near the end looked heavy and made the movements appear awkward.  It was a huge heartbreak for the squad that had been working on their routine since last year.  They placed second in the group stunt category. 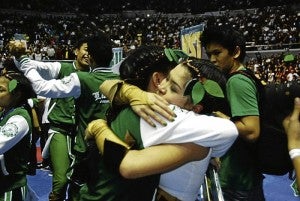 The UST Salinggawi Dance Troupe got their own dose of heartbreak as they slid to fourth place.  They had a Catholic-religious theme as their alma mater is celebrating its quadricentennial foundation year. There were flashes of brilliance in their stunts and they gave a clean and solid performance. However, they lacked snappiness. The whole routine looked like they were submerged under water and it made everything appear in slow motion.

The Adamson Pep Squad gave a respectable performance as they tapped into their inner childhood.  Their movements mimicked toys rolling on the floor.

An invigorated National U Pep Squad finished sixth with its surprising matador routine.  Only 10 members were retained from the previous lineup as the squad had been beefed up with gymnast recruits. Their group stunt team placed third.

The Ateneo Blue Babble Battalion also had an Indian-Bollywood theme but their performance was marred with errors. The UE Pep Squad did a lackluster routine.  It seems that they didn’t get enough support as they came to the floor with unremarkable uniforms.  Their only prop was a Styrofoam headpiece. The scores garnered by the team were not released this year.