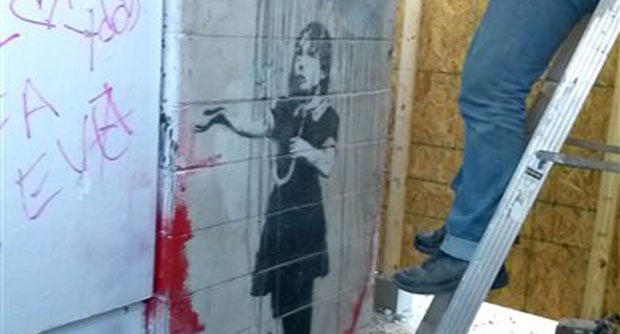 In this Friday, Feb. 21, 2014 photo provided by Mohan Choppala, an unidentified man cuts into a wall with a mural created by the artist Banksy, in New Orleans. AP

NEW ORLEANS, Louisiana—Neighbors in New Orleans foiled what police say was an attempt to steal a chunk of a cinderblock wall bearing a painting by the elusive British graffiti artist Banksy.

Investigators say the building owner called Friday afternoon, saying someone was attempting to cut out the painting that was created after Hurricane Katrina.

Word of activity at the site appeared earlier Friday on Facebook. Pictures showed part of the wall had been removed above the image.

A neighbor says he asked a man working there for proof of a permit to remove the painting. By late afternoon, the man had left.

Known locally as the Umbrella Girl or the Rain Girl, it shows a mournful girl holding an umbrella from which rain pours onto her as she extends a cupped hand.

Big Banksy piece from gas station up for auction