Shop as in a deli, dine as in a resto | Inquirer Lifestyle ❮ ❯ 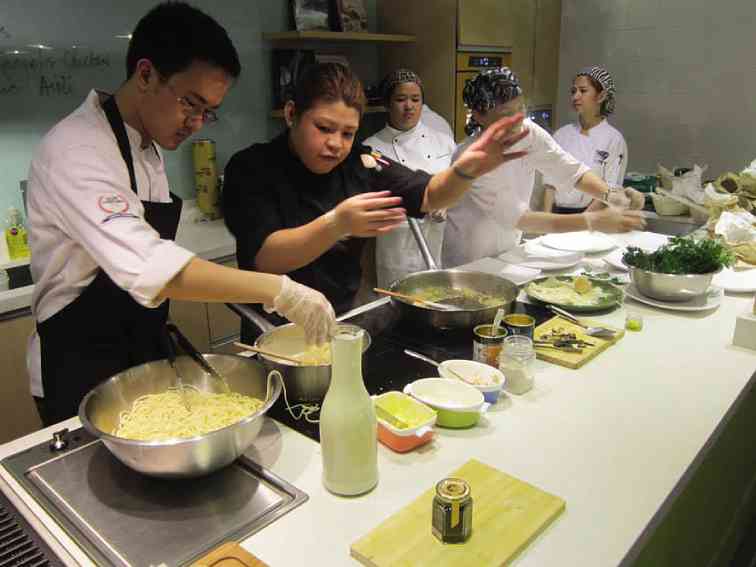 AT THE open kitchen, the chefs whip up a storm.

Shop as in a deli, dine as in a resto

The scent of truffles cooking wafted through the ground floor corridor of the East Wing at Shangri-La Plaza earlier this month. It could be traced to Epicurious, the new dining concept from The Cravings Group.

Inside the establishment that opened late last year, one is greeted by the sight of fresh produce like plums, kiwis and nectarines in fabric-lined baskets. An array of brightly colored vegetables arranged on a table cascades to the floor, while refrigerated displays hold a deli’s worth of assorted cheeses, cold cuts and cuts of meat ready for the grill. Racks arranged at the back have rows of imported crackers, flavored oils and bottled truffles.

While customers have the option of simply buying what they need and leaving, Epicurious is also a restaurant with an open kitchen where the cooks prepare customers’ orders a la minute.

“The idea for Epicurious is actually two-fold. I like going to markets whenever I travel. I can spend the entire day in a market just looking at their wares and the different produce,” said Badjie G. Trinidad, chief operating officer of The Cravings Group, which also has a culinary academy, the Center for Culinary Arts (CCA).

To this end, the store-resto stocks its shelves with both local and imported products like those that can be found at delicatessens.

“Secondly, this is also a place where our students can sell or test the products they make, like some of the dips and sauces we now use. I always tell my students not to gauge if their skills are improving by trying their dishes out on their families. Their families will always find favor, but if a customer is willing to buy from them, then that’s real feedback,” she added.

Trinidad describes working or selling at Epicurious as an “incubation period” for the students. In case customers think that they will be treated merely like guinea pigs, the selection at the restaurant is wide and varied.

“We want to give our clients options so we have a selection of olive oils at different prices. There are imported vegetables and ready-to-eat salads but we also carry the local versions.”

Because of this, the menu is a changing one as it is dependent on what is available from their suppliers.

The restaurant has a motto, “Satisfying Foodies,” which it hopes to achieve with its Shop-Cook-Eat concept where visitors can have what they bought cooked by the chefs.

The food at the press launch consisted of appetizers served in tiny jars, a mixed and already dressed salad tucked into an empty mayo jar, and a heavy pasta dish topped with shaved truffles.

The main course of seared salmon and pork chops was a bit of a misstep—the salmon was perfectly cooked but the meat tasted odd and had a rubbery texture. Even the pasta was heavily sauced but would have shone with half the sauce.

As there is already a dedicated cooking counter available, cooking lessons for adults will start next month. This early, Trinidad said they plan to open a second Epicurious, most probably in Makati City.

“Our intention is really to give people healthier options such as our freshly made juices and salads,” she said.