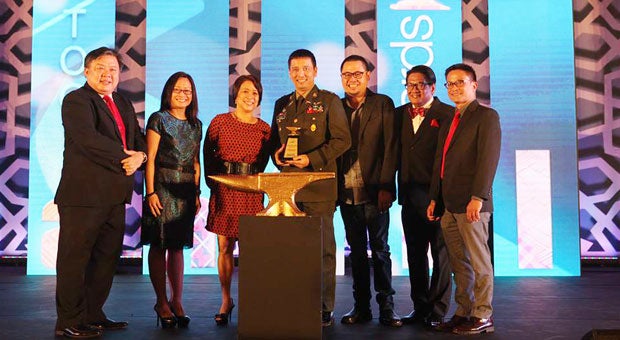 MANILA, Philippines — That “special” branding just got even better.

Considered as one unorthodox fighting unit of the Philippine Military, the Army Special Forces just got another winning card, this time on the public relations battlefield.

After publishing a book to commemorate its 50th anniversary, the Army Special Forces won an Anvil Award for Merit at the 49th Anvil Awards Wednesday night at the Solaire Resort and Casino.

Titled “Philippine Army Special Forces: 50 Years of Valiant Service,” the coffee-table book features the 50 years of the Special Forces and its battles that made the regiment an elite brotherhood and one of the best regiments in the Armed Forces of the Philippines.

“I can’t describe the feeling for the recognition of our hardwork, and I’m very happy because we were recognized,” AFP Spokesman Lieutenant Colonel Raymond Zagala said. “It’s surreal, I never expected that the book will win an award.”

He said that the book has not only met the expectations of others, but was also worthy to chronicle the history of the Special Forces.

“It is an enormous task,” said Zagala whose Special Forces had former president Fidel V. Ramos as its first commander. “The expectation that’s on our shoulder was to create something worthy of the anniversary of the courage and determination of the Special Forces.”

Narratives and stories from the frontlines and the veterans that lived it are featured in the book.

Zagala said that the book will shed light on the Special Forces’ history and its main goal for the country, to defend its sovereignty and its people.

Though the Special Forces is looked upon as one tough brotherhood, the book gives the human, and sometimes quirky, side of the honored men sporting the green berets.