RODRIGO Santoro as Xerxes in “300: Rise of an Empire”

The reign of Rodrigo Santoro

It was one of the more striking transformations in any personal filmography. In the 2003 ensemble film “Love Actually,” Brazilian actor Rodrigo Santoro played Karl, a handsome, sweetly shy tech guy in the early stages of an office romance with Laura Linney’s Sarah. Then, in a truly astonishing change, Santoro was unrecognizable but utterly unforgettable as the grotesquely pierced, inhumanly tall, power-mad god king Xerxes in the kinetic historical action epic “300.”

Based on the graphic novel by Frank Miller and Lynn Varley, “300” recalled the heroic last stand of 300 Spartans against Xerxes’ countless Persian forces. Director Zack Snyder and cutting-edge graphic effects turned “300” into a box-office behemoth—a slow-motion, spears-and-abs extravaganza—and changed the look of action films forever. But Santoro gave the film’s most memorable turn as the human ruler who considered himself immortal. 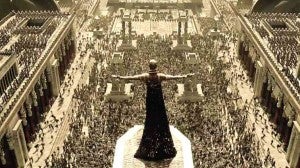 To hear Santoro tell it, none of the people behind the film expected it to be a big hit. On the phone from his hometown of Rio de Janeiro, Brazil, the 38-year-old actor explains in his fluid, slightly accented English how “300” changed his career. “It really had an effect, a big one. It was a turning point for me outside of Brazil,” he said, the excitement clear in the speed and spirit of his words. “I had already been doing things but the movie was just a big surprise hit. In Hollywood, a big hit can change things for you, so ‘300’ was important for me because it opened up a lot of opportunities for me.”

Now, Santoro returns to the role that made him world-famous in “300: Rise of an Empire.” Directed by Noam Murro and based on Miller’s “Xerxes” graphic novel, “300: Rise of an Empire” features the Greek general Themistokles (“Strike Back’s” Sullivan Stapleton) as he directs the united Greek forces against Xerxes and Artemisia (Eva Green from “Casino Royale”) who commands the seaborne swarm of the Persian navy. 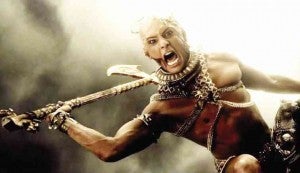 Santoro had a good reason to be recruited back into action—it was all about Xerxes. “I had never revisited a character before and I thought it was a very interesting idea,” he told Inquirer Super. “It’s six years later and I’m now a different person. The most important thing was the chance to humanize the character. When the first movie came out, the character got a lot of extreme reactions. But I didn’t get to explore the character as much as I wanted.

He was powerful and exotic, but you didn’t know what was going on underneath. It’s a way of exploring the character, why he became what he came. It gives you a way of looking into the character in a different, deeper way. What you couldn’t understand in the god king character in the first movie, you can see here.”

He says that this is bolstered by Green’s character, Artemisia. “They have connections and she knows him. Artemisia is a mirror that reflects the humanity of Xerxes. You can see his vulnerability through her.”

Returning to Xerxes was not easy, requiring three months of nonstop working out, a very strict diet and five hours of makeup every day to get into character. For Santoro, it was also a mental change. “He’s such a different character from me. It’s amazing to go into another zone far away from myself. We are in a movie that is hyper-fantasized. I’m mean, I’m a man whose 9 feet tall with the voice of thunder, according to Frank Miller.” Truth is, he’s still doing it. “I’m still doing scenes by myself against a screen. I don’t work with the other actors because I’m supposed to be 9 feet tall. It’s all very technical but I’m happy to be able to do it.”

Santoro has been able to do both Hollywood feature films and movies in Brazil. “It’s a constant exercise. I still want to keep working in Brazil. There’s a lot going on here. Portuguese is what I speak; it’s my mother tongue. Still, I’m happy with all the opportunities I get outside of Brazil. I don’t have a formula or an exact plan. I don’t start the year saying I’m going to shoot here and here. You really can’t predict these things. For me, you have to keep up the balance.”

One of the projects he’s excited about is the currently filming “Pele,” the story of the world-famous Brazilian football player who is considered the best ever to play the game. “It is the year of the World Cup in Brazil and Pele has done so much for Brazil,” says Santoro, who has a small part as an actor but is actually an associate producer in “Pele.”

This new film offers something for those who have seen the original “300” and those who haven’t. “This movie can be watched independently from the first one,” he says. “But if you saw the first one, then it’s a very rich movie experience. We call it a companion film that explores the conflict in Greece at the time. There are new characters and a fresh story. You still have the stylized graphics that made ‘300’ a hit. But the textures and the colors are different.  There is a dialogue between this film and the first film. The film starts after the scene in ‘300’ where Leonidas is killed. It’s also bigger because you get to see the size of the Persian navy, the size of the battle and it’s out there on the water. Everything is just bigger.” That’s just royally right for Rodrigo Santoro, who continues to build on a career crowned by uncanny cinematic choices.