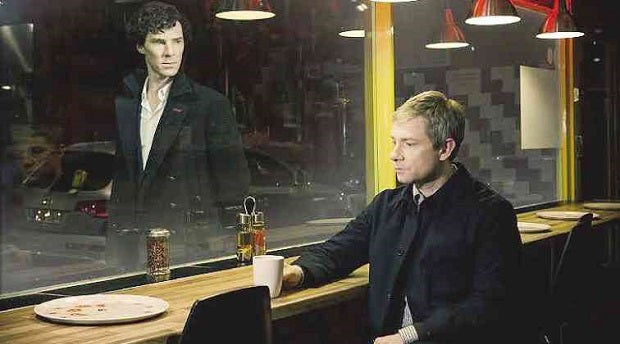 After two long years, “Sherlock” fanatics in this part of the globe will finally get their detective drama fix as the third series is set to hit Asian television screens this February, courtesy of AXN.

The 21st-century reboot premiered with a three-episode series in 2010, followed by a second series in 2012. The two-year gaps only fueled fans’ anticipation for a third installment, especially after a cliffhanger finale in series 2 that has been the subject of heated debate and speculation among its loyal viewers.

“We spent a lot of time after the series going online and seeing everyone’s theories,” producer Sue Vertue told Inquirer Super and two members of the regional press in a recent phone interview. “I loved the fact that people were engaged in it and talking about it. It made it slightly tricky, actually, when we were filming again [for series 3].”

This time, everyone’s favorite supersleuth (literally) comes back to life to track down a new villain who may be the mastermind of a fresh string of crimes that coincides with a happy event in his sidekick Dr. John Watson’s life. 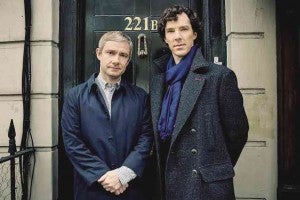 Created by “Doctor Who” writers Steven Moffat and Mark Gatiss, the BBC crime drama “Sherlock” is loosely based on selected short stories from Sir Arthur Conan Doyle’s well-loved collection. It stars Benedict Cumberbatch (“Star Trek into Darkness” and “The Hobbit: The Desolation of Smaug”) as the title character and Martin Freeman (Bilbo Baggins in the “Hobbit” films) as Watson. Executive producer Gatiss also doubles as Sherlock’s older brother Mycroft, a British government “employee” who occasionally consults and butts heads with Sherlock on certain cases.

To date, “Sherlock” has amassed millions of viewers as well as several BAFTA and Emmy nods, among others. The show has even spawned a fanbase dedicated to Cumberbatch, whose high cheekbones and melodious British accent has crime drama addicts melting into puddles across the globe. Who knew that the art of deduction could be so, ugh, seductive?

“Well, certainly a lot of ladies seem to look at the show,” said Vertue. “Benedict is a stunning actor and he’s done many shows before ‘Sherlock,’ but I think this is the one that suddenly brought him forward as a sex object!”

Judging from the countless adaptations made over the years, what makes “Sherlock” such a lucrative venture is that these Conan Doyle classics remain as relevant and intellectually stimulating as when they were first written, even if the audience isn’t well-versed in Sherlock lore. Interestingly, Vertue happens to fall in that category.

“Honestly, I wasn’t a huge fan of Sherlock Holmes and I hadn’t really read the books, but Steven and Mark had read all of them about 150 times, and they made up for it,” she revealed, chuckling. “Since then, we made a decision that I’m sort of the ‘litmus paper’ … So when I look at the script, I look at it as a viewer, not as a Sherlock Holmes/Conan Doyle fan.”

There’s also the fact that Sherlock now relies on the Internet and GPS instead of just a magnifying glass to hunt for clues. But modern technology aside, the fact that the stories weren’t written for a specific era makes it easier to adapt. “The stories were written for the modern man,” Vertue said. “In the very first story, where John Watson comes back from Afghanistan, we said, ‘Look, there are still problems in Afghanistan, we can do that again.’ And after that, it was quite a natural and easy progression to say what would happen now. Funny enough, by season 3, we don’t even think about it being modern-day, it’s just a very natural thing to do.”

Here are more excerpts from the phone interview:

It was actually BBC that suggested that … There was another show, “Wallander” (2008 British detective drama starring Kenneth Branagh), that had the same format and it worked well. With a 60-minute, you might miss something. But with a 90-minute, you have to sit down and look at it properly. There’s a lot of story that goes on in a 90-minute; I think when you watch it, you’ll feel quite full.

And it’s not a cheap show. (Laughs) Yeah, we can’t do any more than three episodes (per series). It’s trying to get the actors and the writers together, and it takes quite a long time to shoot it.

On casting Benedict Cumberbatch as Sherlock:

I always turned to Steven and Mark about how they would see the perfect Sherlock, how he would look like. And they sort of had the same description— you know, tall, thin man with a big nose. Benedict doesn’t have a big nose actually, so … (Laughs) But he was the only person we saw for the role; as soon as we saw him, we knew that was it.

He takes his role very seriously as well, when you look at him and what he’s done with the character. He knows in his head that he was an army doctor; actually, even when he walks, you can see that he has this army walk. He’s stunning that way.

So in the same way as Benedict, once you’ve seen what they can do, you can throw anything at those two boys because their acting abilities are extraordinary. You want to give them a lot to chew on.

On casting Lars Mikkelsen (“The Killing”) as Sherlock’s nemesis in series 3:

Oh, he’s a lovely villain. He’s based on Charles Augustus Milverton who, in the stories, was this huge blackmailer whom Sherlock absolutely loathed, more than the other murderers he’s come across, I think. [Mikkelsen] is a great actor, very cool.

On setting “Sherlock” apart from other current TV/film adaptations:

You have to ignore the other shows around you and make your own show. From what I understand, the shows (“Sherlock” and “Elementary,” the American CBS reboot starring Jonny Lee Miller and Lucy Liu) are very different. Also, bear in mind that it takes ages from the time we write a script to the time it goes out. At the same time we were writing series 1 and series 2, the Robert Downey Jr. film was being made. So you just have to sort of ignore each other, really—make your own show, and not worry.