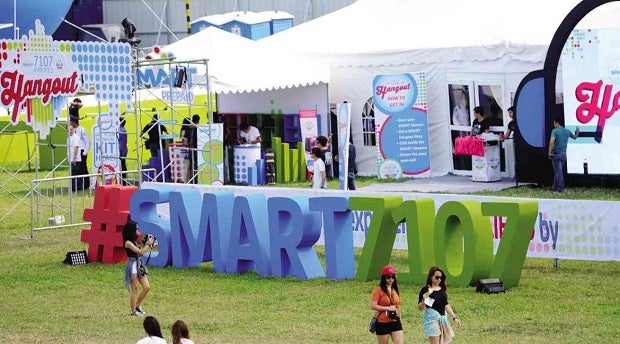 SMART Hangout tent where subscribers can charge gadgets and chill

Chilling with Smart at the country’s hottest music fest

Smart subscribers who attended the 7107 International Music Festival got to chill in the Smart Hangout, an air-conditioned tent with plush seats where one could charge gadgets, play games for freebies, load up, connect to WiFi and take refuge from the outdoor heat.

Smart Prepaid users got “survival kits” with a mat and water bottle. Those who bought P30 worth of load and subscribed to the AT20 package had a chance to play volley pong and giant foosball. Postpaid subscribers who downloaded the Spinnr music app were treated to smoothies and ice cream.

Those who shared their photos online with the hashtag #Smart7107 also got souvenir prints.

Spinnr has a database of 3 million songs that users can listen to or download. First-time users could avail themselves of a 15-day free trial, then buy affordable packages for as low as P7. (Spinnr is available in Android and iOS for Smart, Talk ’N Text and Sun Cellular subscribers. One can use prepaid load or charge the fee in the postpaid bill instead of a credit card.)

There was a video wall in the Smart Hangout that kept guests updated on what was happening onstage. The proceedings were also available for streaming on Huawei tablets through an app called Evolved Multimedia Broadcast Multicast Services, which made way for the first LTE broadcast for Smart.

Smart also offered HSPA+ and WiMax as part of its 4G features.

The Street Smart bundle was also launched at 7107. It is a data pack with navigation and information apps, available at P10 a day. Included in the bundle are Waze, a traffic navigation app; Easy Taxi, a taxicab booking app; Pinoy Travel, a bus reservation app; NLEX Assist, a North Luzon Expressway traffic app; RaincheckPH, for rain updates, and InterAksyon.com, the news site. Also, check out the PowerApp bundle for social apps, including Facebook, Twitter, Waze and Foursquare.

Smart highlighted the event with more music at the Amplified 7107 After Party at V8 Bar and Restaurant in Clark where DJs Funk Avvy and The Diegos played party tunes. Irene C. Perez