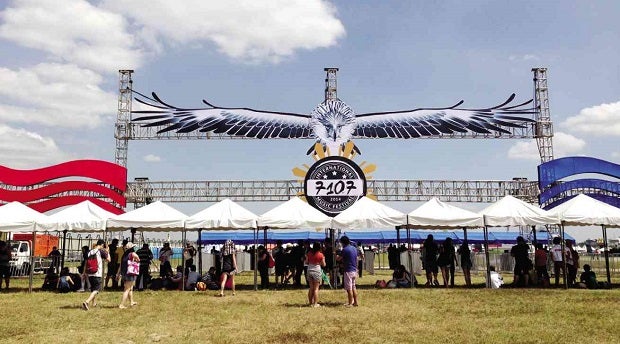 The 7107 International Music Festival held from Feb. 22-23 in Clark, Pampanga province, had people posting their “gig hangover” online a week after the festival (#weare7107 on Twitter and Instagram). Inquirer Super attended the two-day event and here are some of our favorite moments.

3. Empire of the Sun brightening up the stage with psychedelic costumes, spiky headpieces and equally dramatic backup dancers

4. Kendrick Lamar promising hip-hop fans: “I will be back.”

5. British group Natives going local by taking a shot of Tanduay, as seen on Instagram

6. DJ Kaskade working the turntables to a high-energy crowd that started off dancing and rolling like crazy, but later on chilling to the two-hourlong set

7. Red Jumpsuit Apparatus’ Ronnie Winter egging the crowd: “We came from Florida, and in punk rock, we move around in circles. Can you do that?”

10. Marc Abaya of Kjwan saying, “We made it! We’re all at 7107 International Music festival! … If I see the Red Hot Chili Peppers, I’m gonna French kiss those mother*******!”; “Every single person here is a music fan and that matters. Next time this happens, ask more people to come, tell your friends.”

11. Up Dharma Down’s hourlong set, with people singing along, waving their hands in the air at sunset.

12. The view of Mount Arayat from the venue, Global Gateway Logistics City, which is said to be the “Philippines’ first aerotropolis” or airport city

13. Local culture in the festival’s production design: a giant image of the Philippine eagle by the gate and the two stages featuring a sun and carabao horns

14. The 7107 app that shows the lineup, artist profiles and their official links and online accounts; the app also shows maps, food stalls and even the weather and temperature on the festival ground

16. The good weather! Things would have been bad if it had rained. We also love the cool, festive vibe and the fireworks display that capped off the event.

17. Organizers tweeting about a possible repeat next year and asking for suggestions: @7107IMF: “Planning 2015”; “Which Pinoy artists do you want to see next year?” Irene C. Perez