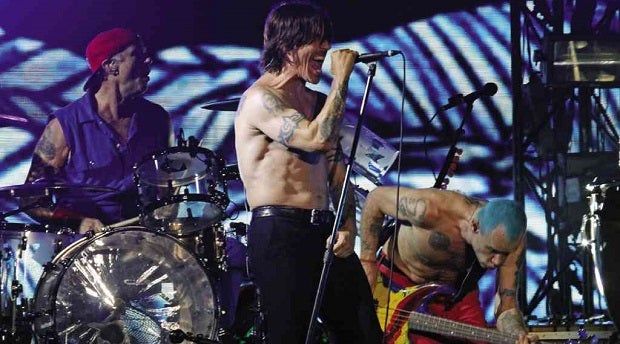 The 7107 International Music Festival is by far the biggest gig in the Philippines, with over 50 local and foreign artists playing for two days before a crowd that primarily came to watch the Red Hot Chili Peppers.

It was like getting full-on appetizers before a scrumptious main dish, or having a long foreplay, if you will.

We raised our hands and closed our as eyes as frontman Anthony Kiedis sang the autobiographical “Under the Bridge.” The band closed with the funk-rap classic “Give it Away” and a message from bassist Flea to “support live music.”

The festival had a cool, beatnik/hippie vibe, which was enhanced by a technically proficient audio crew. The sound was great and the sprawling outdoor venue allowed the crowd to move around—whether one fancied dancing to Empire of the Sun’s electronica or chilling with Radioactive Sago Project’s spoken-word jazz grooves.

We went to the gig on the invitation of Smart Communications, the main sponsor. A giant image of the Philippine eagle greeted guests by the entrance of the venue, the Global Gateway Logistics City in Clark, Pampanga province. An open area of the former US Air Force base was transformed into the concert grounds where people laid out mats and watched the performances from noon till midnight. Dust blowing in the grassy field was a bit of an annoyance (“grassy,” later on, became a lingering scent in the air).

The main stage featured a magnified sun emblem from the Philippine flag while the second stage (not to be called the “local stage,” organizers said) was framed with the gigantic horns of a carabao.

Filipino-Canadian Mike Pio Roda, 7107 copromoter, said the stages’ local touches aimed to identify the gig with the Philippines “without really saying ‘Philippines.’” The festival, after all, is named after the number of islands in the country and was held to pioneer a “global” music fest similar to Coachella in the United States and Glastonbury in the United Kingdom.

Roda said he and his partners had a global audience in mind while finalizing the lineup. “When you have someone like Kaskade, Kendrick Lamar, Red Hot, you mix the genre and you get a mix of men and women.”

The festival attracted a fair-sized crowd, with the majority arriving only on the second day. There was a mix of yuppies and students, plus a number of foreigners. “Festival fashion” included bikini tops, all kinds of tank tops, resort wear, corsets, leather and lace, neon and skimpy shorts.

There was a buffed guy who partied without a shirt on—for two days. We also saw a lot of hats at daytime, glow sticks at night, Doc Martens, sneakers and boots, hipster glasses and pretty much hipster everything.

Groups of friends camped out as early as Sunday noon of the first day to secure a spot near the main stage for the Peppers’ set, which started a bit past 10:30 p.m.

There was no cordoned-off area for VIP ticket holders but most of them stayed in an elevated viewing deck several meters away from the stage.

We were also surprised to find a “VVIP” viewing deck with tables and chairs, and a bar.

Oh, we also spotted several scalpers who made it all the way to Clark on the second day. They were selling day passes and asking us for “extra tickets” as soon we got off the car.

We shuttled to and from the main and second stage to catch as many performances as we could.

EDM fans danced to music from Kid Ink, Alvaro, DJ Riddler and Reid Stefan who played on the main stage. DJ Kaskade closed Day 1 with a party mix featuring his songs “Something, Something” and “Atmosphere.” The crowd partied until the two-hour set wore them out.

Kendrick Lamar fans got their fill of hip-hop on Day 2 and sang along to the hit “Bitch Don’t Kill My Vibe.”

Having two stages far from each other could have been tricky. We were glad to have the 7107 app that gave alerts on what was happening on both stages.

Multiple stages “make it an actual festival,” said Roda. “In the future, we can hopefully add more stages to accommodate more performers.”

We checked out the Smart Hangout Tent as we crisscrossed between stages. Some stayed put under the sun, beach-bum style, until evening. Surprisingly, there were ample food stalls (and a dining area!) that sold chow, including tempura, nachos, sausages and ribs, but scoring booze was a challenge. Lines were long and beer was gold at P120 per can.

The money factor in putting up an enormous event like 7107 became controversial because of reports linking it to Janet Lim-Napoles, suspected pork-barrel scam mastermind. But in the end, 7107 was all about music.

DJ Reid Stefan said people came in “bringing their A-game … Energy is the major difference between playing in a club and in a festival. It was a good opportunity to debut songs and show people how you’re different from other artists.”

Filipino audiences, he added, “definitely love to sing along.”

De Veyra said 7107 might create an “element of habit” among Filipinos to come out and attend music festivals.

So, will 7107 have a repeat next year, and can we please have it in Manila?

“Definitely,” Roda said. “We were overwhelmed by the audience and the talents that came to perform, but we still need to meet and discuss the possibility of staging something like this in Manila.”