All in the family–for better or for worse | Inquirer Lifestyle ❮ ❯ 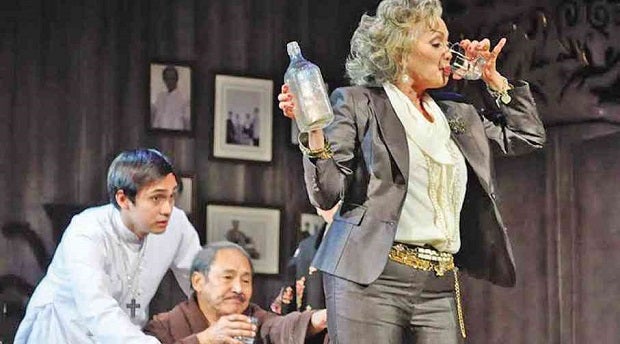 All in the family–for better or for worse

Think “Romeo and Juliet” restaged in a kaleidoscope universe with the lovers as karaoke-loving teenagers, or the prince’s heroic battles in “Ibong Adarna” set to hip music and worded in “jejemon” lingo, and you get the picture. (The critics may carp, but that’s another story.)

A classic play, however, that remains almost entirely faithful to its material and structure demands more from a modern audience who, if they find themselves unable to move beyond the “museum piece” quality of the play, may relate to the material simply as a depiction of history.

The literary pedigree of Tanghalang Pilipino’s “Mga Ama, Mga Anak” makes it a must-see for young Filipinos. It was written by the late National Artist Nick Joaquin and translated by another National Artist, Virgilio Almario, and prominent editor/screenwriter/poet Pete Lacaba.

The storyline and the struggle in it are timeless and something one can relate to: The dichotomy between parents and children, the struggle to emerge out of the shadow of one’s forebears, making up for past mistakes and secret sins, and painful self-acceptance.

Set in the 1950s, “Mga Ama, Mga Anak” deals with the buried, burning issues in the Monzon family that are erupting to the surface now that the patriarch Zacarias (Robert Arevalo in this performance, Spanky Manikan alternating) is on his death bed.

The former “calesa king” lost all his fortune—his political influence, his mistresses, his hold on children legitimate and illegitimate, a life lived in glory—when the jeepney started conquering the roads of the Philippines. Now in his 80s, the hedonistic, cantankerous old man lives in the past, and for the caresses of his 20-something girlfriend, nightclub hooker Bessie (Cris Villongco).

Wrestling to take control of the Monzons’ huge ancestral home, the only remnant of their once illustrious lifestyle, is his sole legitimate son Marcelo (Nanding Josef), who has made his own fortune and name away from his father by making it big in Manila.

The struggle between father and son is more than just about the estate. To Marcelo, it’s about finally triumphing over a humiliating childhood where his father would strike him on the face with his “calesa” whip and force him, his sister, and mother to dine side by side with his mistresses and bastard kids.

Caught in the crossfire are Bessie, who defies a prim society by choosing to stay with the man she believes loves him for who she is; Sofia (Celeste Legaspi, alternating with Jackie-Lou Blanco), Marcelo’s socialite wife who is more accepting of his father than her husband, and who keeps wondering about her husband’s authenticity; Nena (Madeleine Nicolas, Banaue Miclat-Janssen alternating), Zacarias’ only daughter who became a spinster because no suitor was good (or courageous) enough to match her father’s standards; and Chitong (Marco Luis E. Viana), Marcelo’s seminarian son who must choose between tradition and compassion.

The one-setting stage created by production designer Tuxs Rutaquio does take you back in time with its bleak but sturdy cavernous walls, fading chandeliers and set pieces that, for all of their elegant simplicity, can seem to stifle the characters in the room.

Time did not progress in this place, and clearly imprisons those who were not able to leave it. The symbolic centerpiece of the play—the old man’s extremely long table that hosted his unending feasts during his glory days—is wisely left to the imagination.

All the drama takes place in this living room, effectively making it a watering hole and confessional box for the players. Director Joel Lamangan brings out the best from his veteran performers who attack their roles with sincerity and gusto, and in their expertise make archetypes out of their structured characters: The prostitute with the heart of gold; the good son; the devoted “old-maid” daughter; the meddlesome gossipy neighbor (Peewee O’Hara) and the macho clan head raging against the dying of the light.

The two characters who break out of the stereotype and have deeper layers are Josef’s Marcelo and Legaspi’s Sofia.  Josef makes his repressed anger simmer, fume and rumble under the “Americana” that seems too large for him. This is not yet a man who has come into his own and wants to finally show he is better than his father; this is still the little boy who is scared shitless of his father.

Sofia could have been played as a fun-loving matron, but Legaspi makes her a full-blooded mature woman of the world who has painfully realized that her husband’s inability to come to terms with the past is making their marriage suffer.

The emerging archetypes do make their roles, dilemmas and struggles easily identifiable to an Internet-weaned audience with a short attention span— that’s one advantage. On the other hand, the repetition of several points makes the whole thing a bit too obvious, and lessens the challenge for this young audience to read between the lines.

The scenery does not just show—it tells, and tells, and tells. Characters narrate past experiences, cry over frustrations, point out relationship gaps, confess their inner demons, and finally, in the last act, resolve their problems through conversations. No disrespect to the wonderful cast, but a viewer can close his eyes and just listen to what’s going on stage—and he still would get the point.

Then again, that is the theatrical tradition represented by Joaquin’s opus, and it is something that this tablet-wielding audience has to take time to get used to as part of their education. In the performance that I watched, some of the poignant lines were greeted with humor because they were, again, obvious and repetitive.

It is also recommended that the viewers catch up on their history before watching this play, or some of the nuances would be lost on them. Zacarias’ dalliance with Bessie was scandalous then—now it’s the stuff of teleserye. Chitong’s seeking sanctuary and redemption in a religious calling and his insistence on wearing his out-of-place soutane might seem even more out of place in a modern society where churches are having a hard time looking for shepherds.

Without any idea of the context of the struggles of these characters, the audience would wonder what the big deal is. A disconnect happens—and that’s when, unfortunately, uncomfortable chuckles replace empathy, and chatter fills up the silence that comes with contemplation.