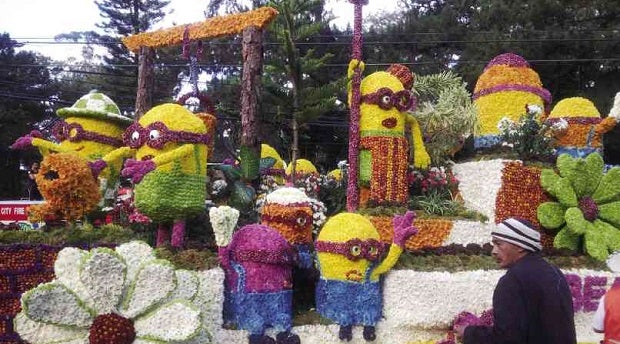 Hollywood (think ‘Despicable Me’ Minions) all over Panagbenga

Hollywood’s influence on Cordilleran culture was evident in the 19th staging of the Panagbenga or Flower Festival in Baguio last week.

Baguio’s local government, which spearheaded this year’s much anticipated Grand Float Parade, had for its float The Minions from Universal Pictures’ “Despicable Me.”

Not to be outdone, a wedding shop had a Disney-inspired float with a “flying” carpet and a pumpkin-shaped carriage.

In an interview at The Manor at Camp John Hay, Baguio Mayor Mauricio Domogan allayed fears that the culture of the Cordilleras is being undermined, saying that this part of the Panagbenga is where ethnic culture and modernity mix.

“One cannot construct a purely Cordilleran float since the Igorots do not have one to speak of. It’s a modern concept,” Domogan said. “But if you look at the materials used, they reflect Cordilleran culture.”

It is in Panagbenga’s street-dancing competition, event co-chair Freddie Alquiros said, that culture is evident. For over two hours, one was treated to various Igorot dances and music interspersed with students playing Jennifer Lopez’s “Dance Again” and Rihanna’s “Where Have You Been” with an ethnic mix.

Panagbenga, which means “season of blooming” in Kankanaey (South-Central Cordilleran language), was organized in 1995 by lawyer Damaso Bangaoet Jr. to bring together the people of Baguio and generate tourism revenue for the city which was then still reeling from the devastation of the 1990 Luzon earthquake.

Apart from showcasing the unique culture of the Cordillera region and sustaining Baguio’s tourism industry, Domogan said that Panagbenga is a time to thank God for a bountiful harvest and to reflect on the people’s obligation to the environment.

“Regardless of your tribal origin, we want you to feel that you’re a member of the Baguio community,” Domogan said.

From Session Road to Athletic Bowl, thousands of spectators lined the streets to watch the spectacle that is Panagbenga. No one seemed to mind the chilly morning of the Panagbenga weekend, with the temperature dropping to 10.5 degrees Celsius.

Domogan said the cold weather of recent months has affected the production not only of flowers but also of vegetables. But this didn’t dampen this year’s Panagbenga celebration which featured 22 flower-decked floats, 19 of which competed.

A crowd-pleaser was International Pharmaceutical Inc.’s (IPI) Egypt-meets-Mardi Gras float. It brought back the splendor of the Middle East with an Egyptian queen atop a mechanical snake and Anubis statues clad in floral bahag holding offerings, while echoing America’s vibrant Mardi Gras with percussion-playing Egyptian “warriors.”

However, its pyramid drew mixed reactions as an image of the Sto. Niño emerged, accompanied with billowing white smoke. Still, it won top honors with a P200,000 cash prize.

The Department of Agriculture-Caraga Administrative Region placed second with an enchanted forest float complete with fairies. Notable was the giant butterfly and bird perched on a giant vegetable basket with carrots and radishes.

Every year, the floats get bigger than the previous ones, and with more intricate details. Event  chair Anthony de Leon said that dressing up the floats would easily amount to P500,000.

Spiking the cost is the addition of animatronics, like the dinosaurs on Baguio Ecopark Inc.’s float.

However, these floats, De Leon said, are not only about beauty and grandeur. “We make sure that the participants are in harmony with our theme of protecting and preserving the environment.”

Panagbenga, with this year’s theme of “Inspiring the community for a greener tomorrow,” has been one of Baguio’s highest revenue-generating events. Before its inception, De Leon said that Baguio’s tourist earnings totaled P17 million. But with Panagbenga, the city now generates over P250 million annually in tourism revenues.

Alquiros added that the city experienced a surge in tourism starting last December. “We still can’t pinpoint the reasons but it may be because of the calamities—Supertyphoon ‘Yolanda’ and the Bohol earthquake. Also, the record-low temperatures may have contributed as a lot of local tourists wanted to experience the cold weather.”

There is no official count yet of the Panagbenga attendance this year. But De Leon said that “from last year’s count of 2.2 million, we can safely say that we had more spectators this weekend.”

With the construction of the Tarlac-Pangasinan-La Union Expressway, Baguio City and adjoining municipalities have become more accessible.

However, this influx of tourists bothers residents, especially in a mountain metropolis where garbage remains a sensitive issue.

But Domogan pointed out that the city has mechanisms in place to deal with the expected increase in garbage.

Alquiros said that the group is planning to meet with former Cultural Center of the Philippines president Nes Jardin on how to improve the elements of the Panagbenga dance competition without making it difficult or boring for the children and open-category participants.

“We guarantee that you’ll see something different next year,” Alquiros said.

One of the innovations introduced in the parades this year is the synchronized stop and dance, which limited the gaps among contingents to 10 to 20 meters. This shortened the spectators’ waiting time for the succeeding contingent.

As Panagbenga gears for its second decade, De Leon said that Baguio might be the new home of the hot air balloon festival.

“I’m in exploratory talks with the hot air balloon organizers. I’m trying to bring them up here in Baguio, but it will not coincide with the street dance and float parade,” De Leon said.