Past and present converge in Taal Vista | Lifestyle.INQ ❮ ❯ 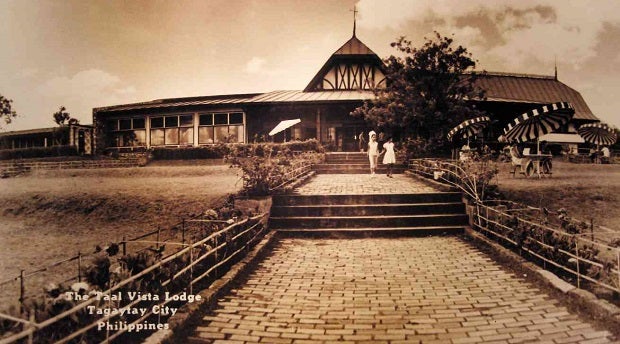 TAAL VISTA Lodge in the midcentury

Past and present converge in Taal Vista

Under a billowy canopy, a long dining table stretched out on Taal Vista Hotel’s veranda, overlooking the misty volcano.

A string quartet played sentimental music. The unexpected high style and pomp revealed that the hotel wasn’t the fusty lodge of yore, but rather a destination of unprecedented standards in Tagaytay.

Since 7 a.m., the waiters had been rehearsing their procession, the sequence of serving the meals, and familiarizing themselves with the guest list.

The guests were journalists who attended the launch of Taal Vista Hotel’s 75th anniversary activities. They were feted with exquisite meals by celebrity chefs who will be holding their own food festivals at the hotel in the midyear.

Built by the Zamora family, the then Taal Vista Lodge opened its doors on Oct. 7, 1939. Mimicking a cottage in the English countryside, the hotel adapted the roof and half-timber framework typical of the Tudor Revival architecture.

In the mid-20th century, Taal Vista was renovated into a modern structure.

The place was patronized by Manila’s elite, among them taipan Henry Sy, because of its resplendent view. His daughter Elizabeth, president of SM Hotels and Conventions Corp., recalled that the family enjoyed Taal Vista’s signature ice cream on a coconut shell while sitting at the veranda.

The taipan bought the property in 1988 and assigned the younger Sy to run the business. Having lived in Europe with building codes on preserving old architecture, she reverted to the hotel’s original Tudor style. Despite the extensive expansion and renovations, the hotel maintained its original facade. “People wanted to demolish it and make it boxy. I said, let’s keep the heritage look. In the past, the lobby was enclosed. You had to go out to look at the views,” Sy recalled.

Sheathed with expanses of tempered glass, the renovated lobby blurs the boundary between the ridge and the inside. With more guest rooms and banquet facilities, it was renamed Taal Vista Hotel.

Sy also retained the cultural dance show, still a major attraction for the guests and their balikbayan friends, and opened the grounds for the children to enjoy.

“Taal Vista was part of your memory as kids. I want to build this for the next generations,” said Sy.

Walid Wafik, area manager of Taal Vista Hotel, Pico Sands Hotel and Pico de Loro Beach and Country Club, gave a tour of the renovations of Taal Vista guest rooms and ballrooms in the Mountain Wing, the lobby lounge and the underground meeting rooms. They were all spruced up with fresh color schemes and rich fabrics.

“With the changes, we wanted to make this anniversary grand. This isn’t the hotel that people once thought it was. Let them hear about the hotel and see it again. They will keep coming back. It’s a nice product, and the place has value. When I first joined the hotel, everybody whom I spoke with said they’ve been here. A famous place like this deserves some recognition,” said Wafik.

The Egyptian hotelier has served the Shangri-La Hotel Group for a decade. He was resident manager of Shangri-La Mactan before joining the SM Hotel and Resorts, owners of Taal Vista Hotel and the Pico de Loro estate.

Two years ago, Wafik did his homework on TripAdvisor, the official site for tourist reviews. He was amazed that Taal Vista ranked No. 9 among hotels in Tagaytay.  How could a pioneering 261-room hotel with facilities  such as two ballrooms and several function rooms fall way behind a seven-room bed-and-breakfast inn which was voted No. 1?

Wafik studied the hundreds of feedback from the guests. “Something was wrong. Nobody has my space, my banqueting rooms, my landscape and the number of rooms, why can they beat me? I put myself in the guests’ shoes. What can I do to make their visit a good experience? After reading their comments about the room, food and service, you start tweaking to amend the services and set a benchmark,” he said.

Wafik worked fastidiously from the staff service to the restrooms. “I didn’t want the employees to carry their old habits. They need to have presence of mind. It’s not just standing and serving for eight hours and then going home. We created a culture, training them on how to smile, how to attend to guests, how to answer the phone, how to greet. It’s not where to put the plate. It’s the interaction with guests that makes a difference.”

Consequently, Taal Vista climbed to TripAdvisor’s No. 1 hotel in Tagaytay. In 2013, the occupancy rate went up to 55 percent from 30-40 percent the previous year.  Likewise, the hotel set a record 54 days of 100-percent occupancy—as in fully booked—last year. Although Taal Vista is known for conferences and banquets, especially on weekdays, it becomes a family vacation place on weekends.

Since the hotel is patronized by the domestic market, the restaurant fare is a mix of Filipino and international dishes. Its specialty is the heritage cuisine which uses local produce and fresh catch from Tagaytay, all served in native pots.

During a trip to Pico de Loro, she discovered sugarcane and Batangueño vinegar which wasn’t too acidic. These became the inspiration for “Adobo Sa Tubo ni Tatang,” the favorite dish of the Sy patriarch, who is fondly called “Tatang.” The sugarcane neutralizes the sour and salty flavors of the classic adobo recipe.

Her ukoy, made of tagunton or baby prawns, is sweet and fleshy unlike the other ukoy-ukoy in which the flour masks the flavor of the shrimps.

She also developed the hotel’s famous sardines, made with bangus cooked for eight hours in olive oil and tawilis from Talisay.

Austria also cultivated a vegetable garden in the hotel which produces oak leaf lettuce, Brussels sprouts, cherry tomatoes and mint leaves that enhance the flavor of desserts and marination.

Executive chef Edwin Santos, with 20 years of experience with the Shangri-La hotels, said that bulalo is the most popular fare among Taal Vista guests. He introduced an international style in which bulalo steak is served on a sizzling plate, accompanied by gravy.

The guests also crave the plated kare-kare, the inasal and the spring rolls with jackfruit.

Santos and the hotel’s corporate chef are girding for the opening of the Magnolia Steakhouse this summer. Santos is unfazed by the competition from Tagaytay’s other famous restaurants.

“The steaks will be different in texture and cooking style. We will offer a wide selection of meats that will be grilled, roasted or char-broiled, char-grilled or pan-seared according to specifications. You can have the roast prime rib cut in different sizes and weights,” said Santos.

The new steakhouse will be vegetarian-friendly. In his previous stint as executive chef of Shangri-La Maldives, he developed a wide repertoire of meatless options due to Muslim and vegetarian guests in the resort. “We can make a grilled vegetable cutlet, served like a burger with chimichurri sauce without the onions and garlic,” he said.

Taal Vista Hotel has come up with several promotions leading up to its 75th anniversary.

On social media, fans have been sending photos of their visits. Every month the hotel will run the guest list and reward the 75th and the 193rd guests with a P75 room rate. The hotel will also hold sales booths in high-traffic SM malls where people can get good rates for accommodations and dining.

From July to October, Cafe Veranda will feature prominent chefs. Aside from Austria and Santos, Jackie and Rolando Laudico, Fernando Aracama, Sau del Rosario and Bruce Lim will concoct special dishes at the weekend lunch and buffet.

On Oct. 7, a weekday, the hotel will honor its long-serving employees. The celebration will culminate in an Art Deco-theme ball on Oct. 9.

“This isn’t the old Taal Vista Lodge. It’s new and competitive. I want this to be the only top hotel in Tagaytay,” declared Wafik.