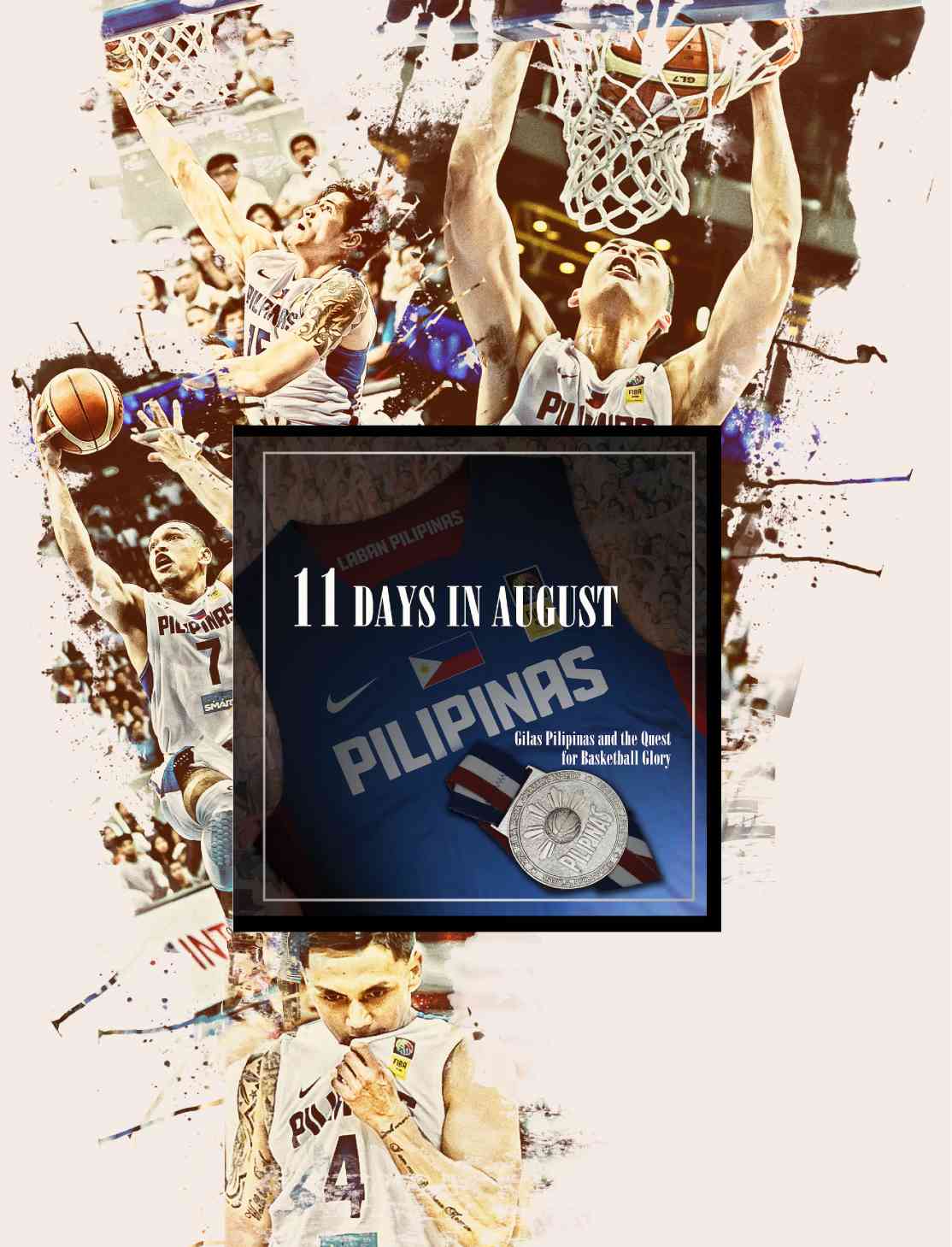 Among the cage stars in the book are (clockwise from top left) Marc Pingris, Japeth Aguilar, Jimmy Alapag and Jayson Castro (Contributed photos)

It was a step towards greatness. On Aug. 10, 2013, the Philippines rejoined the ranks of the world’s basketball elite, an achievement that resonated in a nation addicted to basketball. To do so, the team, known as Gilas Pilipinas, had to overcome the team that had emerged as its nemesis in international play through the years: Korea. Bucking the odds and in front of a frenzied home crowd, Gilas did just that, winning 86-79, ensuring the team of at least a second place finish and one of three slots to the basketball World Cup in Spain in 2014.

On Dec. 17, 2013, the coffee table book “11 Days in August: Gilas Pilipinas and the Quest for Basketball Glory” had its soft launch at the Smart Araneta Coliseum attended by some Gilas players, among them Jimmy Alapag, Gary David, Larry Fonacier and Gabe Norwood. The book took readers back into history, tracing the exploits of national teams past, the impact of business mogul Manuel V. Pangilinan on local basketball, the formation of the Gilas team and the detailed insider chronicle of the Philippine team’s dramatic turn at the 2013 Fiba Asia Championships, all illustrated with glorious photographs.

Published by the AdMU 616569 Foundation for Sports 5, “11 Days in August” spent four months in furious but inspired production as the team behind it sought to encapsulate the Gilas Pilipinas experience in 280 glossy, full-color pages. Much like the actual team’s eventful rise to basketball nirvana, the team behind “11 Days in August” faced its own trials before achieving what it set out to do.

It was less than a year before when the book’s team began its journey. On December 19, 2012, photographer Philip Sison was shooting at an event when he was approached by businessman and Ateneo sports benefactor Arben Santos. The Ateneo Blue Eagles had by then won five straight championships in the UAAP men’s basketball and Santos asked Sison to do a book about it. An investment banker for 17 years, Sison had been taking photographs since sixth grade and gotten increasingly proficient and serious in the craft. “In 2003, I decided to shoot Ateneo sports as a way of giving back to the community,” he says. Together with Nono Felipe, he founded the Ateneo Sports Shooters and in 2006, decided to drop banking to become a full-time professional photographer. “I felt I really needed to make a choice,” recalls Sison, now one of the Chroma Philippines photographers and shoots the Blue Eagles consistently. “Santos said, put the team together and I will take care of the financial portion,’” Sison recalls. “He was instrumental (in getting us started).”

Sison’s first call was to Ateneo batchmate Rick Olivares. The top sports blogger in the country who had previously lived in New York had returned to the Philippines and become a top shelf sportswriter, he was on board as the book’s writer. Sison then recruited Franco Sevilla to be the book’s designer and art director. Not only was Sevilla a former art director handling Coca-Cola for McCann-Erickson and currently chief dreammaker at ActivAsia, Inc., he had actually played ball for the Ateneo in high school and college. “I do my creative work on a freelance basis,” Sevilla explains. He, too, signed on.

Completing the team was Alfred “Krip” Yuson, who would serve as the book’s editor, and Addie Sullivan, as production assistant. “It was our consensus that Joey San Juan of the House Printers was the only person who could do the printing job locally,” Sison says. The book, “5: A Tribute to Excellence,” was launched on June 7, 2013—and soon sold out.

While all this was going on, Santos had a fateful time out on the tee with his golfing buddy, national team coach Vincent “Chot” Reyes. Santos had told the Gilas coach that perhaps the team could make a book for the Gilas team as well. The Gilas team was in a crucial position as the Philippines would serve as host country for the 2013 Fiba Asia Championships. A third-place finish would give the Philippines a slot in Spain. “But coach Chot didn’t want to jinx the team.

He might have felt it was asking too much at that point,” Sison says.

Publishing a book was a good idea, Sison thought and Olivares agreed, saying, “Yes, there are a lot of stories to tell here. Win or lose, it would be a great story.”

Olivares would be doing double-duty at the Fiba championships as he would also serve as Media Officer for Online Publications. Sison would have a more circuitous route getting into the games though he managed to get accredited at the last minute, thanks to Reyes and Gilas manager Butch Antonio. “Everyone else was there to cover it for news and I was the only one there to cover it for a book,” he says.

The Gilas team had captured the imagination of the rabid Filipino sports fans, who had followed the group’s journey to the games, from the dramatic Philippine romp in the 2012 Williams Jones Cup on point guard LA Tenorio’s heroics, to the necessary dropping of fan favorite big man Beau Belga to get to the required 12-man line-up right before the games.

After several wins and one loss, the Gilas boys faced up to the tough Koreans and beat them, winning a ticket to Spain. Tournament juggernaut Iran would top the heap by beating the Philippines the next day. “We were quietly hoping for a third place and we got something even better,” Sison says.

At the press conference after the Korea game, Olivares espied a jubilant Reyes who looked at him and said, “Better get that book ready, Rick.” A week later, the team behind “5” had been reassembled, and a few weeks later, Dr. Severino “Sev” Sarmenta, Jr., the veteran sportscaster and professor, had come in as editor. Santos would again be in charge of business development, while Sison would be project manager and principal photographer.

“The most challenging part about writing ‘11 Days in August’ is getting in all the back story,” Olivares says. Sevilla (incidentally a former Ateneo teammate of Reyes) had difficulty sourcing the photographs for the section tracing the history of the national team. For Sarmenta, the challenge was keeping as much text while still having enough space for a lot of photographs to properly get a feel of the events. There were passionate disagreements, with people swearing never to work with each other again. The way the team members talk about the disagreements makes production sound like hand-to-hand combat.

Reyes was heavily involved, as well. “In a way, this is his Gilas journey,” Sarmenta says. “This was his dream fulfilled, to be national coach.” Sison adds. “Everyone can come up with a book, but without the insight of the national coach, you would lack the inside scoop.” The book would benefit from Reyes’ game notes and TV analyst Andy “Dr. J.” Jao’s game analyses. “I think there was a built-in pressure in the group in that we were telling such a big story. The story was bigger that all of us combined and we didn’t want to do less of a job,” says Sarmenta.

Then, Supertyphoon “Yolanda” hit and the team pondered the appropriateness of their enterprise. “But we said, ‘no, we made this personal commitment to Chot and his group, so we (have to do it),” Sison explains. Finally, a bright moment in a cold month, “11 Days in August” arrived in December.

“It was already pretty on the screen, but it became beautiful in print,” Sarmenta gushes. For someone who has been avidly following the national team since 1987, Olivares called the final product “a labor of love.” “Covering Gilas at home and abroad abroad stoked my dream of writing a book about the national team. Gilas Pilipinas turned it into a reality.”

The initial print run of 1,000 copies at P3,500 has sold out, with a subsequent limited printing of 200. Because the original book was somewhat pricey, the “11 Days in August” team is thinking of alternatives. “We do not intend to reprint the coffee table book,” Sison clarifies. It’ll be a different version, most likely a less expensive softcover.

The skeleton crew of books about Philippine sports usually reflects the popularity of athletic disciplines. For example, the publication of “A Decade of Shakey’s V-League: Where the Spirit of Volleyball Lives On” in 2013 reflected the dizzying rise of women’s volleyball and the role the league played in that rise. Professional boxing has its hero in Manny Pacquiao. Veteran sportswriter Recah Trinidad wrote “Pacific Storm: Dispatches on Pacquiao of the Philippines,” published by Anvil Publishing, which also published the Filipino edition of Pacquiao’s autobiography, “Pacman: My Story of Hope, Resilience, and Never-Say-Never Determination.”

It only stands to reason that basketball, being the top spectator sport, would have the most titles. There’s Talk ‘N’ Text forward Kelly Williams’ memoir, “Rising Higher: Faith and a Little Bit of Roundball.” There’s Christian Bocobo and Beth Celis’ “Legends and Heroes of Philippine Basketball.” Then, there is the magnificently insightful “Pacific Rims: Beermen Ballin’ in Flip-Flops and the Philippines’ Unlikely Love Affair with Basketball” written by Fulbright scholar Rafe Bartholemew and published by Penguin’s New American Library. “11 Days in August” joins this august company.

Sevilla thinks the lack of sports books, particularly hardcovers, can be traced to a lack of material and the problem of commercial viability. “Usually coffee table books are expensive,” he notes. “I think the Filipino sports market is more a masa market.”

“Sports books serve a purpose for the next generation,” Sarmenta says. “You talk to the book publishers and they’re just waiting for these stories to be told. They need just a little push. We’re hoping our contribution can be the start of so many other books.”

Olivares says a lack of sponsorship and funding hamstrings many sports book projects. “I think people should just go out there and write them,” he says.

“11 Days in August” is the visually powerful, well-written and timely product of the production team’s rising over the challenges before them, echoing in a small personal way the history-changing feats of a Filipino basketball team that fulfilled a basketball nation’s fervent wishes. •

Editor’s note: The writer is an Ateneo alumnus and lecturer. For inquiries on the book, please visit labanpilipinas.sports5.ph.