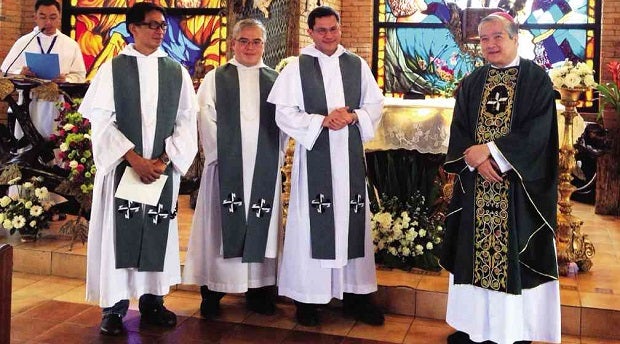 Today, March 2, we commemorate the  eighth and last apparition of the Virgin of the Poor to 11-year-old Mariette Beco in 1933.

On March 2, 1933, Our Lady made her eighth and last apparition in Banneux, Belgium, to Beco. After identifying herself as the Virgin of the Poor on Jan. 19, she “signed ” her message: “I am the Mother of the Savior, Mother of God,” with a final advice: “Pray much. Adieu.”

The observance is taking place a month after the Belgian parliament passed a bill allowing child euthanasia without any age limit.

Bishop Pablo David’s family built a chapel dedicated to the Virgin of the Poor at their property known as “Bahay Pari” in Brgy. Pita, Dinalupihan, Bataan. He learned of Banneux and actually visited Our Lady’s shrine, while studying at Katholieke Universiteit Leuven in Belgium.   Mila Dolores, well-known author of the book “The Virgin of the Poor: A Tribute from her Filipino Children,”  wrote about that visit in her book (available at National Bookstore).

The show wants to inform Filipinos of the reality of overseas employment.  This is done  by storytelling, narration and dramatization of the lives of OFWs featured on the show.

The new program is not the usual problem-solving program; it fosters the sharing of actual experiences of success and failure of an overseas worker. Overall, the show portrays “best practices” and cautionary tales.

The Basilica Minore de San Sebastian in Quiapo  has a new parish priest and rector in the person of Fr. James Bumangabang, OAR, who was  installed Feb. 22 by Fr. Rolando Aquino, SVD, Vicar Forane of the  Vicariate of San José de Trozo to where the Basilica belongs.  Bishop Camilo Gregorio of the Prelature  of Batanes was main celebrant and homilist.

With Ash Wednesday happening on March 5, the Presentation of the Child Parish in BF Parañaque is already  inviting owners of holy images related to “Semana Santa” for the Holy Week procession in April. Those interested may text Fr. Steve Villanueva at 0908-8616218.

The Friends of St. Joseph headed by Dr. Danilo Reyes and professor Geminiano de Jesus and the Daughters of Charity are holding the  exhibit of St. Joseph images and a Novena of Masses  on March 10-19 at the Hospicio de San José.

Unless indicated otherwise, all Novena Masses are at 6 p.m.

Wishing for blessings on  Pining Tengco Reyes on her birthday today.

Fr. Benjie Ledesma, parish priest of Our Lady of the Assumption Church in Leveriza, Malate, has untiringly been organizing Lenten pilgrimages for his flock since he took over as pastor.

This year, the priest will bring the pilgrims on April 5-6 to the National Shrine of the Divine Mercy in Marilao, Bulacan;  Holy Rosary Parish, Angeles, Pampanga;   St. Sebastian Cathedral in Tarlac City, then up San José hills to venerate the Relic of the True Cross of Jesus Christ in Monasterio de Tarlac, which is under the care of the religious order Servants of  the Risen Christ headed by Prior  Archie Cortez;  then St. Michael de Archangel in  Camiling;  St. Raymond of Penyafort in Mangatarem, Pangasinan; and   St. Joseph Cathedral in Alaminos.

The pilgrimage fee is P2,500 only (accommodation and transportation) and registration is ongoing until March 29.  Those who are interested may register either at Our Lady of the Assumption Parish on Leveriza St. in Malate or at Harrison Plaza Chapel.   Please call  tel.  5235797 or text  0915-7844446.

Lingayen-Dagupan Archbishop Socrates Villegas, who’s also president of the Catholic Bishops’ Conference of the Philippines, is this year’s recipient of the Domingo de Salazar Preaching Award.

The award, which is named after the first bishop of Manila, is conferred by the Institute of Preaching of the Dominican Province of the Philippines “to an outstanding non-Dominican preacher, acclaimed here and abroad, and distinguished for his/her notable contribution to preaching,” as stated in the Acts of the Provincial Chapter of the Filipino Dominicans in 2008.

The archbishop received the award in the famous Dominican retreat house and chapel in  Caleruega, Nasugbu, Batangas, last Feb. 25.

“The Domingo de Salazar awardee is a non-Dominican individual, community or institution, that has demonstrated excellence in the proclamation of the Word, while exemplifying values and virtues most worthy of emulation in the preaching ministry,” said Fr. Clarence Victor Marquez, OP, director of the Institute of Preaching.

Villegas has held other significant posts, such as chair of the CBCP Episcopal Commission on Cathechesis and Catholic Education and president of the Asia-Oceania Mariology Society. He has six books of homilies and reflections, and has received the Catholic Authors’ Award and the Ten Outstanding Young Men of the Philippines Award.  As bishop of Balanga, he  received the doctor of humanities, honoris causa, from the Bataan Peninsula State University.