The morning after | Lifestyle.INQ ❮ ❯ 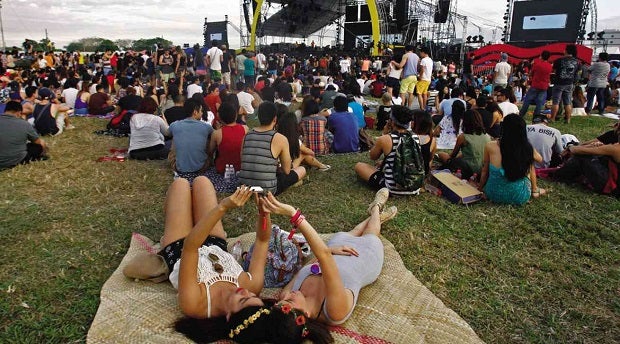 CHILLOUT: Audience members laze around in between performances. PHOTO BY RAFFY LERMA

We were too young to go to the Antipolo Rock Music Festival in December 1970—just four months after the historic three-day fest Woodstock was held in New York.

But we made it to Bistro sa Amoranto: Tugtugan Pamorningan in December 1993 which featured the Eraserheads, Yano and the best of the then emerging Filipino alternative music scene. Produced by the owners of ’70s Bistro and held in Amoranto Stadium in Quezon City, the 12-hour concert drew an audience of 18,000.

Fast-forward to Feb. 22 and 23. A two-day music fest dubbed 7107 has just been held in Clark, Pampanga. It’s the biggest event of its kind in the Philippines—more than 50 local and international acts performed, with the Red Hot Chili Peppers closing the fest on the second night.

The scenes we saw on Day 2 were encouraging: the youthful crowd enjoying the festive atmosphere, gallivanting in an open field without being hassled by security; loads of food like salmon sashimi, chicken teriyaki and other fare offered by about a dozen concessionaires; sufficient beer to quench one’s thirst (although expensive at P120 per can of San Mig Light); and performers eager to strut their stuff on two big stages.

However, some points need to be raised, in case there will be another 7107 in the future, if not next year:

Is there another venue not far from Manila where the dust won’t irritate the eyes, and potholes in the grass won’t threaten to sprain the ankles? The Global Gateway Logistics City, where the fest was held, is an industrial site where factories and warehouses are situated. Though the open field is wide enough, it is not an ideal concert venue.

Is there a need to have two stages with simultaneous performances? The idea is apparently inspired by Lollapalooza, Coachella and other music fests abroad, where the headliners perform on the main stage while the rest of the acts are assigned the second, third or even fourth stages to give the audience alternative music choices.

But that works only if the featured artists on the alternative stages are hot enough to offer something new to the crowd. Or if the programming or sequencing of the artists would allow the audience to check out the other stages without missing the action on the main stage.

On Day 2 of 7107, there were instances when the artists on both the main and second stages were playing similar sounds; in fact, they were both DJs spinning dance music.

The more lamentable fact is that an engaging act like Radioactive Sago Project was relegated to the second stage, playing to about 200 people.

Is it really necessary to get as many as 50 acts for two days, when majority of the audience traveled to Clark to see just the Chili Peppers? Isn’t it more practical to hold 7107 for one day with a tight and solid lineup? Or, if the organizers really want a two-day fest, why not split the lineup with 10 of the most compelling Pinoy acts and maybe five truly interesting foreign artists, whose combined talent fees could be even lower than what the greedy agents that negotiated the Chili Peppers deal pulled off?

Why charge exorbitant price for tickets, when scalpers would be allowed to sell them at half the original cost?

The morning after the fest, we thought of a few suggestions:

Why not hold the next 7107 at the Rizal Memorial Track and Football Stadium in Manila? That’s where the Beatles performed in 1966. We heard it has been renovated, and can hold 30,000 people. It is also more accessible than Clark.

Hire somebody who knows which foreign and local bands deserve to be on the bill. If the organizers want to be true to their word of wanting to showcase the best of Filipino music to an international audience, they should already be considering Joey Ayala with the Bagong Lumad, Gary Granada, Noel Cabangon, Grace Nono, Bob Aves, Cynthia Alexander, Kai Honasan, the AMP Big Band, to name a few.

And since Coachella is known for band reunions, how about these for 7107: an Asin reunion (Cesar Bañares may have died, but there are three remaining ex-members), a Yano reunion (if Dong Abay will be convinced to say yes), and The Jerks original lineup (with Nitoy Adriano and Jun Lopito on guitars), just to show foreigners as well as Pinoy kids that we also have a local band that can rock so good we don’t even have to watch the Rolling Stones in Macau.