Pitoy Moreno is not in a coma | Inquirer Lifestyle ❮ ❯ 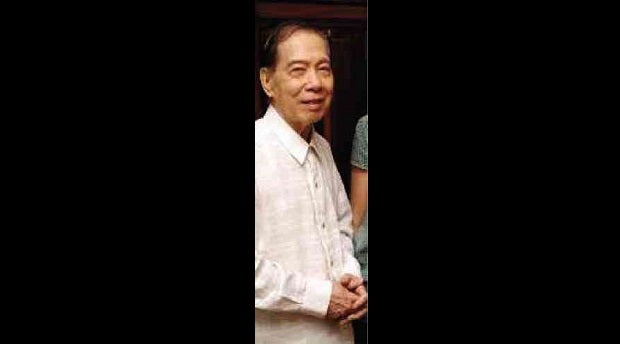 Pitoy Moreno is not in a coma

Pitoy Moreno is not in a coma, contrary to the talk going around on the eve of his birthday last Tuesday.

He lies on the bed in a hospital suite, unable to talk but obviously able to hear. “Pitoy, this is Thelma. Happy birthday!” I say, after Paula, who’s almost like a daughter to him, whispers caring words into his ear.

Hearing my name, he turns his head in our direction, and opens his eyes just a wee bit. That is good enough for us, a moment to rejoice, actually, and to prod us to half-shout some more under our face mask.

“Thelma,” I repeat my name, and add, “Get well. Pictorial tayo.” The nurse points to how he seems to be pressing his hands. He is reacting, we all say in glee. “Pictorial” must be connecting to him somehow, even if no words come out of his mouth. He is feeling the presence of friends who troop to the hospital to be with him on his birthday.

The invitation says his family, led by his only sister, Virgie Moreno, is welcoming friends to his hospital suite on his birthday for some “blessing and cheering.” And his close friends are, indeed, here.

Jose “Pitoy” Moreno is a pillar not only of Philippine fashion, but also of Philippine society. Since the 1950s, not only has he been in the inner circles of Philippine politics—Ferdinand Marcos and Benigno Aquino Jr. were his “brods” in Upsilon Sigma Phi and shared memorable young adult experiences with him—Pitoy Moreno has also been a household name, for he has cut across political and social alliances.

In my early years covering Lifestyle, he would brief me regularly on the background—pedigree, really—of old Filipino families, and more important, would tip me off on who was marrying whom, and who were separating. He was a valuable resource on the juicy goings-on in high places, from the boardroom to the boudoir. He helped spice up Lifestyle’s people-are-talking-about columns. We shared secrets.

He found delight in orienting our staffs on the who’s who in Philippine society. That was what the many an adobo or kare-kare lunch was for, capped by his famous buko salad. Our deadline was his deadline—he knew when to give us the dish, usually on Friday noon in time for our late afternoon deadline.

So now, I coax him by his hospital bed, “Pitoy, deadline na!”

I never thought the day would come when I’d see Pitoy immobile on his sick bed. He was a ubiquitous presence—from Malacañang receptions, at state functions for Philippine presidents abroad, to socials here, even wakes. I remember him narrating to me, with a chuckle, how, on the day of Ninoy’s day-long funeral that drew millions on the streets, he stood on the roadside, in the throng, to watch the cortege pass by—but this was after he rushed from the Palace, where he attended Mass with the Marcoses.

Standing beside and holding now an ailing Pitoy leaves me very sad but also feeling quite privileged. It is a rare opportunity to greet and say thank you to a Philippine institution who helped see us through our career.

He has been feeble for quite some time, and was rushed to the hospital recently after he choked on his food. The particles infiltrated his lungs and caused pneumonia. It’s really a common ailment of people his age. He flatlined, but since his nurse had brought him to the hospital immediately, he was revived in the nick of time, and didn’t slip into a coma.

This afternoon, we arrive the same time as Boy and Paula Feria. Paula is the daughter of Pitoy’s best friend, the late Corito Araneta Kalaw (she owned and ran Sining Kamalig, a pioneer art gallery in the ’80s and ’90s). Pitoy would spend every Sunday lunch in the Kalaws’ home in the south, including Christmas Eves.

Being there ahead of us is his muse, Meg Paris, the fashion model who went successfully into fashion design and had a popular RTW line.

She is joined shortly by another Pitoy Moreno muse, Carolyn Masibay, the beauty queen who was also one of his favorite models.

I find it funny how, after Virgie says Pitoy turns 84 today, Carolyn and Meg gasp in shock, no, in fear, and say, they will never talk about Pitoy’s age—never!—because they know that he never gave his age. And they will obediently abide by this wish to this day.

Before Malate church’s priest, Fr. Michael Martin, another friend of Pitoy, can start the blessing, Celia Diaz-Laurel enters the room, with her son Cocoy, the singer and actor.

Celia is another best friend of Pitoy going back to their college years at UP. It was Pitoy, who was then in the College of Fine Arts with Celia and Araceli Limcaoco Dans (who would become one of the country’s sought-after painters), who introduced Celia to her husband-to-be, Salvador “Doy” Laurel, another Upsilonian. Doy would become a senator and then, vice president to Cory Aquino.

Cocoy, his voice still supple and soaring, sings to Pitoy.

Before the suite could fill with guests, we all drive to Pitoy’s house/atelier in Malate—a beautiful place that brings us poignant memories. Through the years, this was where we would have very juicy and sumptuous lunches.

Pitoy would invite me over for lunch until about two or three years ago, when, I noticed, he had gotten quite forgetful.

There ahead of us are designer Ito Curata and his partner Bob Miller, and our good friend, Dr. Greg Alvior of the PGH Foundation.

Over merienda cena, they swap travel anecdotes about Pitoy. They were in Greece, Dr. Alvior recalls, when three of them were waylaid into a secluded restaurant by thugs. He and Pitoy were able to slip out, but their third companion fell behind and was being held by the thugs. Frantic, they asked for help, with Pitoy shouting, “Pulis, pulis!”

Now, they laugh, can you imagine the diminutive Pitoy shouting his lungs out?

I look around and see that the framed photographs of Pitoy—all priceless because they show him with world celebrities, including Britain’s Princess Margaret—are still atop the commode and tables.

I throw a glance at the dining table and can almost see, in my mind’s eye, Pitoy holding court. “Esto, esto,” he loved to begin his stories.

But then, he isn’t there.