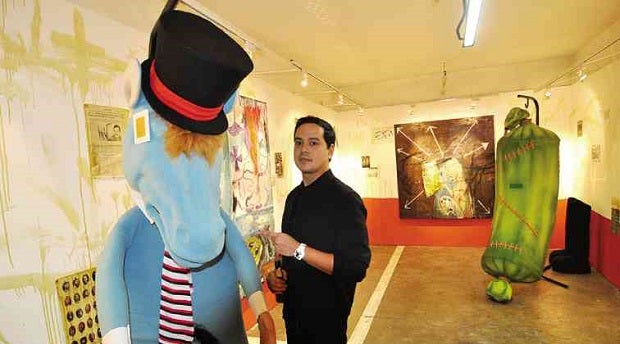 JOHN Lloyd Cruz spent over three hours at the art fair, looking at all the contemporary art available

Celebrity endorsers are not known for lingering in events which they are obliged to attend. As if to keep their mystique, they come on time but leave immediately after the requisite picture-taking and handshaking. Not John Lloyd Cruz.

He went to the preview of Art Fair Philippines 2014 last Feb. 19 as one of the Swatch endorsers. When time came to unveil the Dynamic Happy Horse painting by National Artist BenCab, he and singer Lea Salonga dutifully drew the curtain concealing the image of the black beauty in mid-gallop.

After the unveiling, Cruz stayed on to talk with some of the art patrons and collectors, check out the galleries, and even play table tennis on one of artist Louie Cordero’s installation of ping-pong tables.

Since he moved out of the family home and into his own place two years ago, he has been slowly filling his walls and nooks with works of contemporary local artists—from Elmer Borlongan, Pardo de Leon and Pow Martinez to Nikki Luna and Manuel Ocampo. He prefers paintings and sculptures.

“I choose pieces based on gut feel. It’s really more of the heart and not the mind that decides,” Cruz said when asked how he chooses and buys artworks.

To have an extensive glimpse of contemporary Philippine art, he was advised to see the collection of Paul Que, one of the foremost collectors in the country. And he did.

When I spotted him late afternoon at the space of Marina Cruz, the artist and wife of artist Rodel Tapaya, Cruz was gazing intently at three tableaux combining painted panels and children’s dolls.

“I wanted to get these but they’ve already been reserved,” he said, “although I also wanted this painting of a printed top on a scarlet background.” That piece, also by Marina, was reserved but Cruz still signified his interest in the piece. Judging the way the gallery’s staff fawned over him, he just might already be the proud owner of a piece—or pieces—by Marina Cruz. Apparently, in art circles as in the real world, good looks will get you somewhere.

“At least he knows what he likes,” said interior decorator Jonathan Matti, who was also at the art fair. Matti, an acquaintance of the actor, said he was aware of Cruz’s art collection.

“He isn’t moved by art trends, doesn’t join the bandwagon—and there is a bandwagon,” Matti said.

It was nearly 7 p.m. when I left the art fair, and the next batch of collectors and patrons had arrived.

Cruz was still there in the middle of a ping-pong game on one of Cordero’s wildly colored tables, seemingly oblivious to the fans and their flashing cameras.