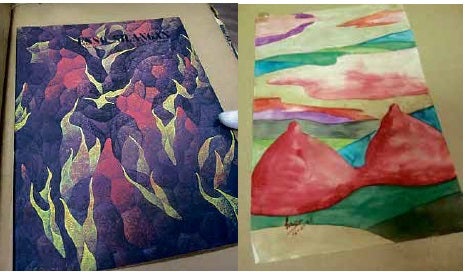 H.R. Ocampo scrapbook-paintings to be auctioned off March 8

A major auction of works of Philippine masters led by National Artist Hernando R. Ocampo will be held on March 8 at Salcedo Auctions  in Salcedo Village, Makati City. It is billed, fittingly, as the Important Philippine Art sale. Things get going at 2 p.m.

Excluding the paintings of Ocampo, which are contained in a scrapbook, there are 85 works of art, mostly paintings and a few prints and sculptures.

Friends and admirers of the late Santiago Bose will be interested to know that he has a large mixed-media work, “Mambo Manila” (P900,000-950,000), the title of which recalls the “Mambo Magsaysay” theme song during the 1953 presidential elections.

The work shows the comedian Bayani Casimiro, watched by American soldiers, dancing in a night club holding one Philippine flag aloft and another Philippine flag pointing to the floor. In front of him is a surreal sight: dancing (empty) trousers with belt and shoes.

The piece-de-resistance is the  Ocampo scrapbook filled with 22 paintings dating back to the 1940s and ’50s, vintage clippings of magazine and newspaper articles, reviews and photos.

The publications include the Sunday Times Magazine; This Week, a magazine of the Manila Chronicle, Daily Mirror, The Evening News Saturday Magazine and Esso Silangan.

One untitled work shows a man walking on a plateau or steppe as if in a dream, with clouds overhead. Another shows a figure done in Cubist style; while a cross dominates a third untitled painting.

“These are not studies for larger works,” says Salcedo Auctions consultant Ramon E.S. Lerma. “They are finished works, all signed and dated.”

Ocampo had given the scrapbook as a gift to the late critic-artist Rod Paras-Perez, who had written and designed several publications on the master artist.

A year before his death, Paras-Perez sold it to a private collector. It is now being offered through Salcedo Auctions.

Along with Manila’s art lovers, art collectors from Singapore, Indonesia, Taiwan, Hong Kong, Europe and the United States will be flying in to participate in the bidding.

Auctioneer is a Briton based in Singapore, Andrew Thomas.

“He has done a lot of charity auctions and also estate auctions in the UK,” says Lerma.

“The bidding usually starts below that,” points out the art consultant. “But considering that there are 22 paintings, I think there is going to be a lot of interest in the scrapbook. And also, there are the exceptionally rare works by the (other) masters.”