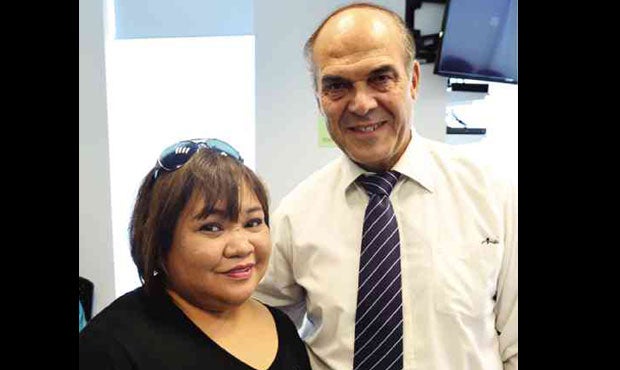 From caregiver to singer, Rose Fostanes is living her dream

When Rose Fostanes stepped into the waiting room for Filipinos hoping to secure a work visa at the Israel Embassy in Manila, the recognition she received was nothing short of surreal.

After having won the inaugural season of “X-Factor Israel,” Fostanes says that it truly warms her heart when people started recognizing her in Israel and now here in the Philippines.

Fostanes arrived Wednesday night and was not spared from the attention she received at the airport. She says she doesn’t consider herself a star and that inside she knows she is still the same person.

A caregiver most of her adult life, Fostanes admits she has always loved singing, and now that she has the opportunity to pursue it, she says she has some catching up to do.

But even as she was preparing for the competition’s grand finals, she recalls worrying a lot about her work visa expiring. She says that in her mind, whatever the result would be, she still wanted to report to her employer.

“If you will watch the video of my finale performance again, you’d see me shaking my head because at the back of my mind I was very worried,” Fostanes says.

At that moment, all she could see from the audience were her sister Nancy and her girlfriend of 30 years, Mel Adel, who were flown in to Israel courtesy of Yariv Fisher, CEO of Flyeast, who was “moved by Fostanes’ charm.”

Fostanes became the grand champion after her rendition of the Frank Sinatra classic “My Way.” Her employer decided no longer wanted her to return and care for her because that would only get in the way of Fostanes’ dream.

But winning the competition is one thing. To work legally as a singer is another. With the help of Israel’s Interior Minister Gideon Saar, however, Fostanes now has an entertainer’s visa and a few concerts on the horizon.

“It’s more tiring, what I do now, compared to when I was a caregiver,” she says. “After you care for your employer, you can rest, but now, there are rehearsals to go to.”

Fostanes certainly has come a long way from when she started working abroad at age 23. Who would have known that, from singing part-time at a bar in Tel Aviv, she would go on to win “X-Factor Israel”?

“My Israeli friend encouraged me to try it out,” she says.

But after suffering a setback in another singing competition “Kokhav Nolad” (A Star Is Born) a few years back, she says she was having second thoughts about joining.

“But my friend believed in my talent, and even helped me fill up the forms as I didn’t know how to read and write Hebrew,” she says.

Fostanes, who many have likened to Scotland’s Susan Boyle, is hopeful that before she turns 50 in three years, she would have made a mark as a professional singer.

“Whatever talent we Filipinos may have, we should not be shy to share it,” Fostanes says. “We have what it takes to compete with the world. Go ahead and do it, because you have nothing to lose by trying.”