Why this business leader loves the sport of kings | Inquirer Lifestyle ❮ ❯ 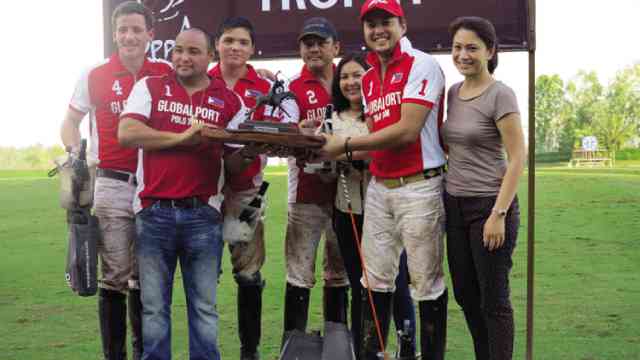 Why this business leader loves the sport of kings

The players’ circle is tight-knit, born of decades of roughing it up together across the fields. For some, it has been a family tradition, part of their DNA.

Then here was this newbie who would swagger with a gaggle of bodyguards at the Manila Polo Club and fly to the polo field in Calatagan, Batangas, in a helicopter—a mode of transport also used by polo patron and magnate Iñigo Zobel.

“It’s much faster,” explains Romero, who is also known as president of Globalport 900, team owner-manager, art collector and doctor of economics.

“I admit I came on too strong for them. I got a lot of polo horses in my first two years. I brought in professional players right away. They had never seen anything like it. But, it’s all or nothing for me. I tried to initiate changes. On my first year, I couldn’t understand their conventions.

“Philippine polo has always been a Sunday game. My first initiative was to put up a Filipino league that played on Tuesday, Thursday, Saturday and Sunday at the Polo Club. Let’s put out results of the game. We can have it published and people will know about the teams. I wanted to bring excitement, but that became a question mark.

“Polo shouldn’t be an exclusive sport. That’s why I put up my own field in Calatagan. I’m trying to change the norms for the better. It’s like how I do business. I will charge through the brick wall. In the end, you will understand why I’m doing this.”

Today, Romero is gaining respect, and is acknowledged as the new polo patron (accent on the last syllable), who has the means to form a team and import professionals. A professional could easily fetch $40,000 a game, which is nothing compared to superstars’ fees. The team owner is also a skillful player.

Romero’s latest coup is organizing the first Philippine Polo Open set from March 4 to 8 in his Globalport Polo Field and Zobel’s Hacienda Bigaa. The championships will be on March 9 at  Manila Polo Club. It’s the first time that six teams from Asian countries will be competing.

Each team consists of two owner-players and two top-ranking professionals, with a combined handicap of eight goals. If this were basketball, imagine the PBA with wealthy, pedigreed Asian players and top-ranking pros. It takes some P10 million to host an event of international standards.

“A foreign team spends $20,000 as entrance fee for such a major event. But for the first Philippine Polo Open, I waived all fees. The objective is to make patrons all over Asia aware of our Filipino polo players and our world-class facilities,” says Romero.

The fields in Calatagan were designed by a Spanish expert in polo fields. “Iñigo Zobel and I made available 120 polo horses for this event,” Romero points out.

“The rewards of being a champion are just the bragging rights to being the first country/team to win the Philippine Polo Open inaugural championships. I made crystal trophies for this,” says the patron.

It’s his enthusiasm and commitment that have made Romero a true sportsman. He was a varsity basketball player at La Salle, and a third dan blackbelter in arnis.

As owner of the Harbour Centre Port Terminal, he organized a team which set a record of seven straight wins in the Philippine Basketball League. He also supported the Philippine basketball team which won the gold in the 2007 Southeast Asian Games.

Through Indonesian  businessman and team owner Erick Thorir, he met Tony Fernandes, Malaysian founder of AirAsia. A few years ago, Thorir and Fernandes were organizing the first Asean Basketball League. Romero oriented Fernandes on the ins and outs of basketball organization.

The friendship and trust led to a business partnership. Fernandes invited him to join AirAsia Philippines. Romero is chairperson of the airline which is now called AirAsia Zest.

Deep in his heart, Romero wanted to take up more challenges. He recalls that he started riding horses as an eight-year-old. While vacationing in Baguio, his grandparents would put him on a pony and he would find his own trails.

After formal training in horseback riding in Quezon City, Romero got waylaid by school and other sports. “I said to myself that once I make it in life, I will buy my own ranch and my own horses.”

Romero owns 60 polo horses from the US, Australia, Argentina and New Zealand that live on his Calatagan ranch. While many of the polo players have been competing since their teens, Romero had to catch up. He trained in California, Chicago and Thailand and joined international competitions.

For his 41st birthday last year, he sponsored the Romero Cup, which was celebrated in high style. “I always put up a cup to create more awareness. I believe my role is to broaden the spectrum,” he says.

“As in any sport I’m into, my objective is to elevate the players. I brought in professional players this season to raise the skill level of the Filipinos, and  to teach the younger players the international standard of play.  We need fresh blood for polo. If you keep it cliquish, it won’t work. Let’s open up, lend horses and get professional players to coach,” he says.

Despite his busy schedule, Romero jogs,  lifts weights and plays basketball daily to keep in shape. Given his cross training, he’s able to recover after a spill.

“Polo is more physical than basketball, and is said to be the second most dangerous sport after Formula I. It’s like rugby, you bump each other’s horses. At first, I thought polo was just porma, a glamorous sport. Once you’re playing, it’s very intense. While your legs are clutching the horse, one hand is reining in while the other is holding the mallet and you’re looking at everyone else. Every part of your body is doing something that’s different from the rest,” he says.

Feeling the horse run some 56 km per hour, with sudden stops and turns, and driving a hard ball at 161 km per hour, he loves the exhilaration of being out there on the field.

“I always think 10 steps ahead. That’s one of my learnings from sports. In business I do that and in life, too,” says Romero.