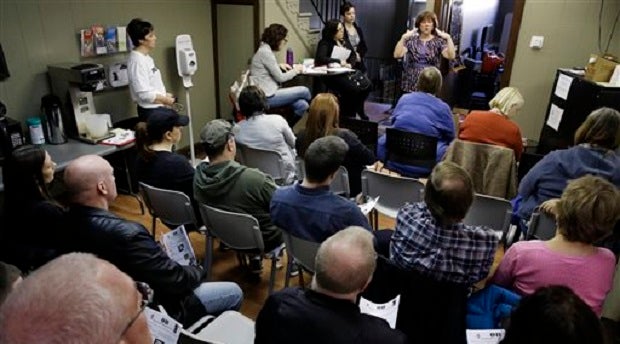 Registered Nurse Babette Richter, background, with the South Jersey AIDS Alliance talks to a gathering about the technique for administering the heroin overdose antidote, naloxone, also known by its brand name Narcan, in Camden, N.J. on Saturday, Feb. 22, 2014. AP

CHICAGO — Most people who abuse addictive prescription painkillers get them for free from friends or relatives, while drug dealers are a relatively uncommon source for those at highest risk for deadly overdoses, a US government study found.

People who abuse the most frequently often doctor-shop; more than 1 in 4 who used these drugs almost daily said they had been prescribed by one or more physicians. Almost as many said they got them for free from friends or relatives; only 15 percent of the most frequent abusers said they bought the drugs from dealers or other strangers.

Those abusers “are probably using at much greater volumes and simply asking a friend for a pill now and then is not going to be sufficient,” said Dr. Leonard Paulozzi, a researcher at the federal Centers for Disease Control and Prevention.

According to the study, two-thirds of abusers said they used the drugs infrequently and well over half of these users said they got them free from friends or relatives.

Paulozzi and CDC colleagues analyzed four years of nationwide health surveys on nonmedical use of pain relievers including oxycodone and hydrocodone. These include the brand-name pills OxyContin and Vicodin, in a family of drugs called opioids — chemically similar to opium.

The study was published online Monday in JAMA Internal Medicine.

Paulozzi said overall prevalence of nonmedical use of prescription opioid painkillers has held steady in recent years, at about 12 million, or 1 in 20 people aged 12 and older.

A separate study in the same journal presents Tennessee — among states hardest hit by prescription drug abuse — as a snapshot of the problem. From 2007 through 2011, one-third of Tennessee’s population filled an opioid prescription each year, the study found. Nearly 8 percent had used more than four prescribers and these abusers were more than six times more likely to have fatal overdoses than the least frequent users.

The larger nationwide study included data from annual government health surveys for 2008-2011 that included questions about use of these powerful painkillers.

“Nonmedical use was defined as use without a prescription or use with a prescription for the feeling or experience caused by the drug,” the researchers said.

Paulozzi said the data don’t indicate whether friends and relatives who offered free drugs shared their own prescriptions or had obtained the medication in some other way.

Public health messages have urged patients with legitimate prescriptions for addictive painkillers not to share the drugs and to turn in any leftovers to designated drop-off sites.

The new data suggest a need to strengthen messages to doctors to be on the watch for signs of prescription misuse, Paulozzi said.