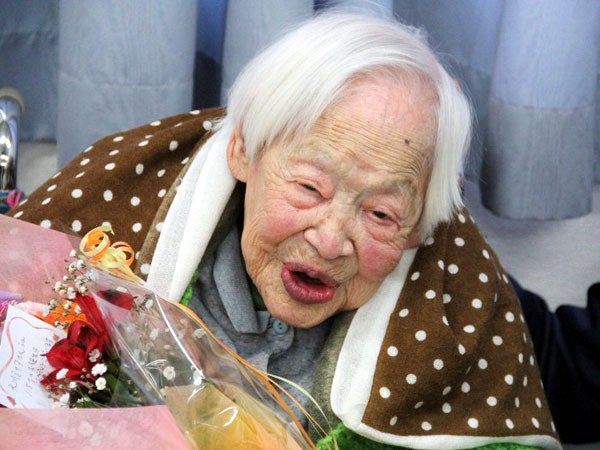 This handout picture taken by Tomohito Okada from the Kurenai nursing home on March 5, 2013 shows the world's oldest woman Misao Okawa celebrating her 115th birthday after receiving flowers at the nursing home in Osaka, western Japan. Okawa, who late last month received a certificate from Guinness World Records confirming her status as the oldest living woman, celebrated her 115th birthday on March 5 in a Japanese nursing home with her favourite mackerel sushi dish on the menu. AFP PHOTO / TOMOHITO OKADA

TOKYO — The world’s oldest woman was celebrating her 116th birthday on Wednesday in a Japanese nursing home with a cake and candles.

Misao Okawa, a descendant of kimono merchants in the city of Osaka, western Japan, received a visit from town mayor Takehiro Ogura earlier this week ahead of her birthday, a nursing home employee said.

Wearing a pink kimono with a red flower headdress, Okawa was presented with a bouquet by the mayor at the facility near her own home.

Asked for a comment on this year’s birthday, the centenarian said: “It’s quite a long time.”

She will be given a cake with candles decorated with numbers, 116, later Wednesday to celebrate the day with fellow residents and family members, the employee said.

“She is in good shape, and is even still gaining weight,” the employee said.

“She eats sushi, her favorite, and whatever she likes — beef stew, spaghetti, sashimi every day.

“She always says the secret to living a long time is to eat a good meal and relax,” he added.

She was born on March 5, 1898 and married in 1919, having three children, four grandchildren and six great-grandchildren, local media said.

Japan, known for the longevity of its people, was home to the oldest man ever to have lived — Jiroemon Kimura, who died in June 2013 at the age of 116.

Around a quarter of Japan’s population of 128 million is aged 65 or older.

The figure, already one of the highest proportions in the world, is expected to rise to around 40 percent over coming decades.