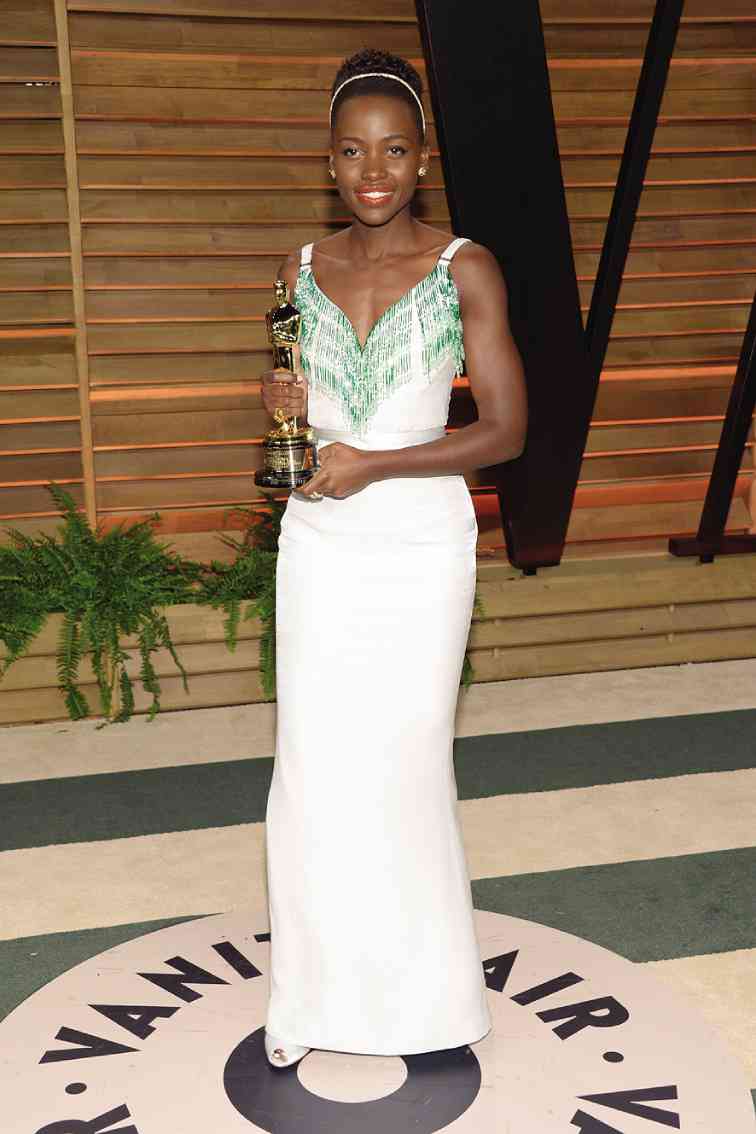 For the post-Oscar party hosted by Vanity Fair’s Graydon Carter, the stars and celebs ditched their red-carpet formals and changed into less dramatic frocks, the better to enjoy the rest of the evening in more comfortable yet still sexy designer dresses.

Since there were at least three other important parties after the 86th Oscar awards, the costume change was needed so that the stars could walk, dance, schmooze and go to the bathroom without a bevy of assistants. That meant dumping anything with a train or fishtail.

Black was the choice for the second wind for many actresses shown here. And why not? Black will hide bulges and reveal skin best. Black sets off the face and the jewelry and it can come in any fabric or guise.

Best supporting actress Lupita Nyong’o changed into a fitted white dress with green fringe by Miu Miu, the lower-priced RTW line of Prada, which did her Nairobi-blue sunburst pleated gown.

Amy Adams wore a cream one-sided draped jersey. Anne Hathaway changed into a strapless sexy albeit safer version of what she wore to the Oscars. Penelope Cruz got into a black chiffon number to replace the pink chiffon gown she wore during the ceremonies.

The designers were likewise dressed like their clients in comfy yet stunning pieces. Check out Carolina Herrera and Diane von Furstenberg.

Actors who had been tweeted or Instagrammed earlier in unflattering poses tried to redeem themselves by wearing safe choices which however bordered on the boring. Jennifer Lawrence  changed into a metallic mini dress guaranteed not to trip her, make her stumble or fall. Reese Witherspoon also came in an LBD with a plunging neckline.

Actors aging gracefully wore age-appropriate formals—Liza Minnelli in vintage Halston, Bette Midler in amber. But it was Jane Fonda in Armani Privé who looked golden like the statues the many winners were holding all night.

Needless to say, the best accessory that night was the shining Oscar trophy itself.