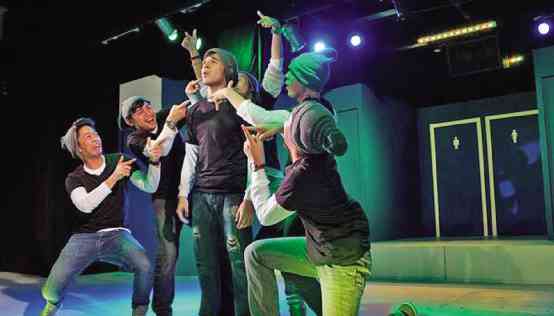 ‘Toilet: The Musical’–far from perfect, but Ejay Yatco’s music shines

The experience of watching Ateneo Blue Repertory’s “Toilet: The Musical” (which concluded March 1 after a three-week run) approximated that of sitting in the middle of a Bornean rainforest, at three in the afternoon in May, to see some cool animals appear.

The university’s Gonzaga Exhibit Hall, which lacks air-conditioning and whose ubiquity of windows is a light designer’s nightmare, should never ever be used as a venue for any stage production. The final matinee performance of “Toilet” was a standing-room-only affair, and for more than two hours, the audience busily brandished makeshift fans to ward off the unbearable heat that plagued that sauna of a “theater.”

The stage design was also problematic: Was there really a need to extend the right and left sides of the stage in the form of wings, such that those seated on the first two rows had to uncomfortably turn sideways whenever something was happening up there?

What this arrangement achieved was the periodic disruption of the show’s momentum, when focus could have easily been sustained by utilizing just the central performance space.

Spatial and environmental issues aside, there’s much to laud in “Toilet: The Musical.” Ejay Yatco’s original English-language work brimmed with promise despite a rather flawed premiere by BlueRep.

Certainly this musical broke no new ground with its story. It’s set in an unspecified high school (could be any famous Manila private school teeming with kids of the well-to-do, English-spouting kind) and concerned eight main stereotypical characters: the troubled artist, the slut, the religious fanatic, the jock with a brain—you get the drift.

The primary weakness of the musical’s book (by Bym Buhain and Miyo Sta. Maria) was ironically its desire to lend every one of its characters equal treatment. The upside was that “Toilet” wasn’t just another superficial, Disney-fied sing-along like “High School Musical.”

The downside? For a rather simple premise, there were too many stories—eight main characters!—competing for the viewer’s attention.

In keeping with the idea that “we are all our real selves in the toilet,” the school janitor (played by Darrell Uy) also doubled as the omniscient narrator—an annoying role that was essentially filler and could have been done away with.

There’s also the stock closeted gay relationship—too sleazily written to even be involving—between the teacher and the sensitive yearbook editor who commits suicide at the end of the show (not a spoiler, promise!).

It begged the question: Was this “Bare 2.0”? (Well, the central homosexual romance in “Bare” was quite poignant and perceptive, to begin with.)

A life of its own

The music of “Toilet,” on the other hand, took on a life of its own: It was the real star of the show. Count them—22 original songs, both music and lyrics single-handedly crafted by Yatco.

The songs ran an impressive gamut of styles. But the fact that they refused to break the integrity of the storytelling and, more importantly, became full-on participants in the projection of emotions for every scene, was Yatco’s biggest success here.

“Just Wait Awhile” deftly illustrated the unspoken adolescent agony over identity, and opened the show by establishing a unifying milieu for its characters: All of them are struggling to present a nice face to the world, to “just hold it in, put on a smile,” and put up with the pressures of school and home.

“Don’t Fall in Love” hinted at the subtleties of forbidden love. “Friendzone Song” satirized that heart-mangling situation of romance that fails to take off as a serious teenage horror.

With last year’s “Sa Wakas” (by Culture Shock Productions), and now, “Toilet,” Yatco is fast proving himself to be one of, if not the most exciting, young musical director and composer of the contemporary local theater scene.

In general, the predominantly student-actor ensemble could flesh out the basic intricacies of their roles—never mind emotional realism—even as they had to suffer through the endless stomping and galloping that marked Jim Ferrer’s angst-ridden choreography.

Franco Chan, as class jock and valedictorian Paul, glowed with a natural leading-man sensibility, while Mica Fajardo showed she could be flat-out hilarious as the Bible-quoting slut-in-disguise Lucille (until the character kind of morphed into a wailing witch in Act II).

But it was Krystal Kane, as campus slut Therese, who displayed the sort of stage presence heralding the birth of a potential future theater star. It was all visible in the way she composed herself, the way she could shine through the group numbers without once chewing scenery, her effective use of body language to convey adolescent sexuality, her ravishing singing.

“That Type of Girl,” Therese’s jazzy, self-expositional number, was the perfect avenue for Kane to audition for a future production of Kander and Ebb’s “Chicago.”

It’s the epitome of the show’s characteristic whimsy, but also of the daring creativity that coursed deep in this production.

All things considered, BlueRep’s “Toilet: The Musical” was far from perfect, but it’s an admirably brave attempt—and for a first try, that would do.